Wolvhammer – Writhing Into the Bliss 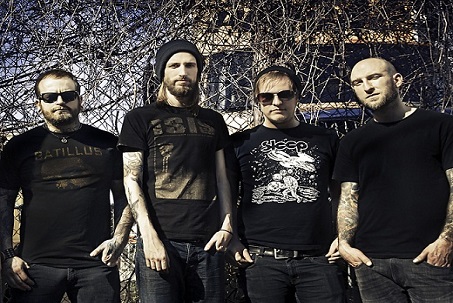 Somewhat of a reactionary act to the current wave of Cascadian black metal bands, Minneapolis/Chicago-based ensemble Wolvhammer perfectly embody the feral and ugly side of modern day BM on their second album, The Obsidian Plains (Profound Lore). It’s an album that rocks as hard as it punishes, with Nord-happy tempos and soundscapes embellishing the full-on scour and grimace front the band proudly displays. If anything, it’s one of the more versatile American black metal albums to come down the pike of late, thus giving the band full mobility to do just as they please for album #3.

With this in mind, drummer Heath Rave was kind (and sarcastic) enough to reply to Blistering’s queries about Wolvhammer. We’d be remiss if we didn’t give a special nod to his response to our typical last question of “What’s on the agenda for 2012?” Down the hatch we go…

Blistering.com: I’m curious to get your thoughts on American black metal, for it’s a mixed bag at the moment. Where do you think Wolvhammer fits in?

Heath Rave: Honestly, as far as how we fit in, I don’t think that I’m the one you should ask. That’s something I would ask you, or a fan of the band, or even better someone who may not even like us. We’re definitely a bastard child of the genre in my opinion. Regarding the mixed bag of American black metal, that’s neither here nor there to me. There are bands I like, and there are bands I don’t like plain and simple, whether it is for their concepts or their music. Yeah, I have to admit, there have been some things that have come around that leave a bitter taste in my mouth, but I have no illusions that there are probably some people that feel the same way about what we do, in all fairness.

Blistering.com: From an outside view, you guys are almost a direction reaction to the “nature-oriented” black metal that is becoming more prevalent. What makes your sound grittier and uglier than most?

Rave: We don’t live in nature. We live in the city. We’re from America. We’ve grown up around punk and hardcore as well as metal and we just wanted to do something fast and angry. This isn’t all about art; it’s also about hate, violence and a whole lot of “fuck you.”

Blistering.com: Usually, a band’s surroundings will prompt some sort of influence on their sound. Does your Minneapolis locale bear any influence on Wolvhammer?

Rave: Well, I am not from Minneapolis, although the band was started there. I have lived all over and just recently made the move to Chicago. Being in the urban environment, being around the local metal scene here as well, it’s kind of hard not to be influenced by it. Smog, garbage, decay, commercialism and apathy are what we wake to and the oxygen we breathe daily.

Blistering.com: Furthermore, because you’re in the Midwest, does that hinder or help your touring/live gig capabilities?

Rave: Mostly having everyone living in different cities hinders our live capabilities, but we certainly do our best to play as much as possible.

Blistering.com: I’ve heard people describe you as a Hellhammer-meets-Eyehategod combination, to everything in between. If there was an apt descriptor for Wolvhammer, what would it be?

Rave: I think our friend Dallas from Swan King said it best, “Imagine a Swedish hardcore band, but from America, playing black metal, but instead of breakdowns you guys do cock-rock parts.”

Blistering.com: You added Jeff [Wilson, guitars] from Nachtmystium to the band. What type of traits does he bring to the table, outside of his experience with an already-established outfit.

Rave: Jeff is an incredible songwriter and musician. Bringing him into the band was very natural and made a lot of sense. I think he is dragging more experimentation out of us and heard on the new record and he and Andy [Schoengrund] complement each other well in their playing styles.

Blistering.com: Compare and contrast The Obsidian Plains to its predecessor, Black Marketeers of World War III.

Rave: The simple answer is we have a different singer and guitar player/songwriter around to contribute. Things like that will always change the dynamic of a band. I do think it’s a very natural progression for us. We wanted to expand what our sound was and i think we accomplished that naturally as oppose to forcing it. Black Marketeers was raw and what we were about when we started our band but by the time we had that record done, we were prepared to take it further. At the end of the day, it’s just the next chapter of Wolvhammer, comparing the two is almost unfair.

Blistering.com: There’s a relatively fast turnaround time between the two albums. Was the band inspired coming off the first album?

Rave: Absolutely. We had new material already coming out of us a month after that record was released.

Blistering.com: What prompted you to go with Profound Lore for the album’s release?

Rave: They asked us. There was no question at all to go with them. It’s an honor and a privilege to be included in such an amazing roster of bands on one of the best underground metal labels out there currently.

Blistering.com: Because your sound isn’t limited to just black metal, did that give you plenty of flexibility when putting the new songs together? Some of the more “rock” moments on “The Gleaming” and “Writhe” are pretty awesome…

Rave: We’ve always just done what we’ve done. If a riff is good, we’ll use it, regardless of how it may be classified. We write as metal fans, and we write the stuff that we like to hear and that feels good for us to play, purely and selfishly.

Blistering.com: What type of approach will you take for touring/live gigs for 2012?

Rave: Stuff is in the works. Stay tuned.