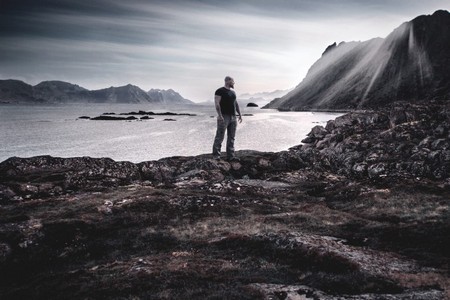 Dead Rhetoric: You’ve had some incredible appearances at the Summer Breeze festival – what makes that event so special and endearing to Wolfheart followers do you think?

Saukkonen: I can’t really answer on behalf of the followers, but it is definitely my favorite festival so far of the ones I’ve played, by far. I have been working as a festival producer, stage manager, and backliner for 9 years now in Finland, and at the moment I’m driving to the last festival of this season in northern Finland. I just really love how well the Summer Breeze festival takes care of the artists- the mood of the festival, the audience is really good. It’s a perfect festival in my opinion. It’s a highlight of every year when we get to play there, this was the third time we played there with Wolfheart. We wanted to show the footage for our music video from there, I really wanted to have a positive vibe so it had to be Summer Breeze – even though there is a quite a contradiction between the festival name and the song title / theme. I couldn’t imagine a better festival, the guys are doing a really good job.

Dead Rhetoric: What’s the best fan encounter that you’ve had in any of your musical experience through the years? Or any special gifts that fans have presented/made for you?

Saukkonen: I rarely get any gifts. I prefer to have my private life as a private life. Gigs are a different thing, you are surrounded by the fans and its part of the game to interact with them. I haven’t had any creepy stalkers but it’s always special when you meet someone that has a tattoo of your band, logo, or the lyrics. Those encounters I have had a lot and they are always really special, because I take the whole tattoo thing quite seriously myself.

Dead Rhetoric: OneManArmy Records is also your personal label – what do you hope to accomplish through these efforts? What types of bands /projects do you seek out, will you stick to domestic bands or search for international talent?

Saukkonen: I’m going to do this only for the Finnish bands. I have had the label since 2007 and that label was also the management company for Before the Dawn. The company was behind Black Sun Aeon and a few others, and back then I was only doing licensing deals. So it has been pretty active with my own bands but the whole situation with the music business at the moment is really crappy. Business-wise it’s a really stupid decision to release new metal albums at the moment. I like that old school style, and when I hear a band that is really good and I like the guys I want to stick my hands into it and help as much as I can. I am considering a few others, I will release 4-5 albums each year. It’s difficult to find your audience and the whole internet/ social media is way too overbooked with all these bands. You need to promote yourself with money, Facebook, it’s difficult to find your audience and find new fans. So I don’t want to release too many albums because I know each album is going to require a lot more work also from me than it would have done like 10 years.

Dead Rhetoric: How exciting will it be to tour Eastern Europe with Insomnium this fall? Do you have good relationships with other melodic death/extreme metal bands in your home country?

Saukkonen: It’s going to be super cool. We’ve been touring with Insomnium a lot in Before the Dawn, our first tours together 8 years ago in Finland. I know the band really well, and it’s going to be very cool especially in Eastern Europe, because it’s a lot easier to get a tour going in central Europe, like Germany. The Eastern European countries aren’t as easy to access.

Because of my work, each summer I produce 3-4 festivals in Finland, all of them are metal festivals so I could say that I have worked with all of the possible metal bands in Finland that could ever play in a festival. Finland is a really small country, the population is five million, which is half the population of London, and that’s the biggest city in England. A small country with small circles, it’s pretty easy to get to know everybody who plays in a melodic death metal band. I do know the guys in the scene and we do get along really well.

Dead Rhetoric: Your day job is as a landscaper/gardener. Do you find this contrast against your metal musician lifestyle helps balance things out as a person – and give you more fuel for creativity in the long run?

Saukkonen: In a way, yes. Since it’s a seasonal job because of the long winter, that means I do quite a lot of the work in the summertime. At the moment between the festival production and the landscaping, it takes up 300 hours a month, that’s quite a lot of time. Of course it means I have 120 days of vacation in the wintertime, which allows me to work with the music freely with 100% focus. If I would be able to support myself solely with the music I would be a lot happier, but I need the landscaping for the balance and I do need to pay some bills and put food on my table. I’m not a regular musician guy, I don’t drink at all, party and stuff like that so I don’t feel that comfortable if I only completely relied on the music. I think it’s healthy to have work as a balance, but then again it’s only work. Money can support my musician sides.

Dead Rhetoric: Are there any possibilities that Wolfheart will be able to come over to the United States at some point- even if it’s a one-off festival appearance at say the Maryland Death Festival?

Saukkonen: There have been some requests for the band already, especially about the Maryland Deathfest. There has been a few tours on the table already, it’s a tricky region to play. It’s going to demand quite a big investment from the label also, it’s in the hands of Spinefarm at the moment. The working permits and flights already cost almost the same as doing a medium size tour all across Europe. So financially it’s a challenging thing for the label, but there has been some negotiations about tours already. Definitely my goal is to play in the US with this new album, so within the next 14-16 months that hopefully will happen.

Dead Rhetoric: Do any younger musicians ever hit you up for particular words of wisdom or advice either on the music front or business end- and if so what do you talk to them about?

Saukkonen: Weekly on Facebook I get questions about playing technique. I get a lot of demos, people asking if I could listen to this song and what I think about it. If I have the time I will listen and I will then give my opinion on it, the good and the bad. Sadly I don’t have much time to connect with people in that way because it’s not just one or two minutes, if you want to give a thorough feedback on song, production, or the band it leads into a longer conversation, which I would actually like to have. I have been thinking because there are a lot of those questions, maybe conducting a workshop thing on social media where I would take two hours and talk about it.

Dead Rhetoric: How is the next 12 months shaping up for Wolfheart? Have you already begun the early stages of writing the third album?

Saukkonen: No. Like I said about the work schedule, I’ve been so busy with work that I haven’t touched my guitar in three months. I wrote one new song just a couple of days ago. I have listened to the raw mixes of the song. Hopefully we will be really, really busy with touring over the next 12 months, and so I don’t need to get into writing new music. The album Shadow World was mixed and mastered last October already, so that’s the reason why I don’t want to start writing the new album because it’s going to take quite a long time for the label to actually get the album out. The album could get worn out from my own ears.