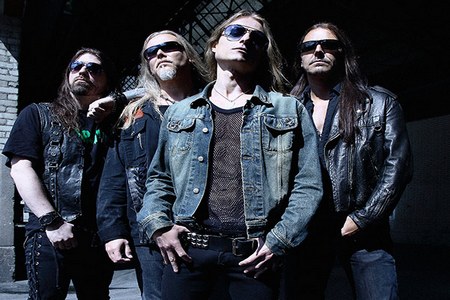 Dead Rhetoric: Tell us about the band’s own brand of hot sauce, Wolf’s Blood Hot Sauce 666? How did you get involved in this venture, and what makes your sauce special and distinct from the others?

Ståvlind: We were playing with Firewind in Austria and this really drunk guy came up to us after the show and he had a friend who was making hot sauces and he wanted a band to cooperate with him to make a hot sauce, and I said that this would be perfect for us. We just like to do extreme stuff, and I really love spicy food and things other people can’t eat. We e-mailed back and forth, we asked if he had a sauce that was 666,000 scovilles, and he said he did. We didn’t even try it out, we knew it would be strong enough. The sauce is unbelievably strong, I am now on my third bottle of it so I can get used to it. One of my friends, I will tell you how strong it is. He took a big drop of sauce on a teaspoon, I said to just try it with a toothpick, but he took it all. A few hours later he called his psychiatrist, because he was having a panic attack. That was his body’s reaction, after one minute I could see the panic in his eyes, he was walking around like a zombie, he didn’t think he could drive his car. I was feeling bad, when he got home he was panicking and found out it was the sauce. We may bring the sauce on a festival run and make a video compilation of people trying out the sauce, you can’t really describe how it is unless you taste it. The sauce is made out of pepper that is used in India to separate crowds as pepper spray, ghost pepper. This is pepper is something spectacular.

Dead Rhetoric: What are your views on instant communication/social media? Do you embrace it as a promotional tool and ability to get closer with your fans?

Ståvlind: Yes, I do. I really do. I can understand why people avoid it, and I also try to limit myself because I don’t want to live in a pretend world with pretend friends and get instant gratification for everything I do so it can be consuming. It’s a perfect tool to reach out to other people, inspire others, get feedback and a reaction to my art. You can’t afford big ads in the magazines all the time, so we do this to reach out to many people.

Dead Rhetoric: Are you hopeful to gain some sort of North American tour in support of this new record? I know you’ve played the 6 Pack Festival in 2003 in Cleveland, Ohio as well as the 14th edition of ProgPower in Atlanta, GA last year; do you have fond memories surrounding these appearances?

Ståvlind: Oh yes, Atlanta for Progpower is an amazing festival. We had heard about this from so many other bands, you have to go there. The atmosphere and everything, you are very well taken care of as a band. Also the 6 Pack weekend, that was the first time we went to the United States and that was such a great festival. I like playing on one stage, indoors, go there and watch the band you really like and every band gets to play on a huge stage, good lighting and good sound. The fans in America are so friendly and social. I love to play in the United States, so we are trying to work something out, because we don’t have the right connections yet but we want to go back there. I understand that heavy metal is a lot more underground in the United States than it is in Europe, people see that we are in a band and in America they think we are in a country band because they see the long hair and the beards. They don’t even know about heavy metal.

Dead Rhetoric: Where would you like to see Wolf go in the next 3-5 years in terms of popularity? What type of goals do you set for yourselves?

Ståvlind: We would like to headline bigger shows and sell out bigger tours. We have such a great back catalog of songs, we could easily fill a two hour show with good songs. In my mind we have not reached our potential. This type of metal is still a bit underground, we are not Slipknot or anything like that, but I think there is a market for this. We need a bigger audience, this music deserves it. This kind of metal is getting more and more popular again, the albums we make I am happy with but we haven’t reached the level of audience we would like.

Dead Rhetoric: What does the next 12 months for Wolf look like in terms of a promotion/ touring schedule?

Ståvlind: We have a small tour in the UK and continental Europe right after the release of the record, and we are setting up our festival schedule for 2015. I think we have to work out another tour in the spring, family and work situations have to be worked out. We have to take shorter tours and more focused tours, because we have small children and stuff like that. We do our best to reach as many fans as possible.