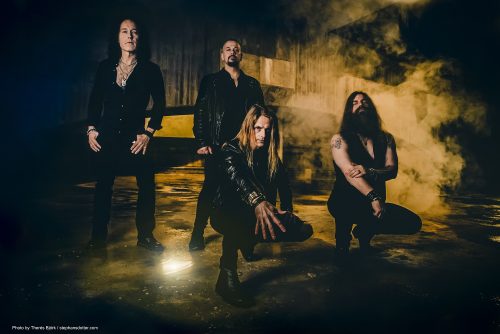 Dead Rhetoric: What would you consider some of the greatest challenges or pressures you put upon yourself when it comes to Wolf?

Stalvind: To write the best material I could ever come up with. I put a lot of pressure on myself, a lot more than I put on the other members of Wolf. Because I don’t think I’m entitled to put that pressure on anyone else – Wolf is something that means so much to me. I really want Wolf to be the best that we possibly can be with what we have. Then you really have to be committed. I haven’t made a lot of money on Wolf, but this is kind of my life mission. It’s a struggle because I have a day job, I work 40 hours a week, and come home after work exhausted but I try to put all my effort into making new songs, traveling to rehearsals, and doing all the behind the scenes stuff.

The most difficult thing is to be able to juggle all of these things – to be there for your family, your kids, your wife. Be a co-worker that your boss won’t fire and your co-workers trust you – at the same time (music) is my passion. It’s a battle, but there are other people in the world that aren’t as fortunate as me, and could begin to do what I do. I’m very grateful to have the opportunity to do this, to follow my passion. I put the most pressure on myself to write the best songs I could ever write, or co-write with the other guys songs. Because that’s the most important thing, if you don’t have the music, if you don’t care about the songs – if you only care about the free beer, the girls, and the party, that would be bullshit. Music is something deeper than that.

Dead Rhetoric: What do you think would surprise people to learn about Niklas the person in comparison to the musician that they hear on record or experience when seeing you live on stage?

Stalvind: (laughs). A lot of things. People hear Wolf, and then people who end up being members of Wolf, when they get to know me they see I am a totally boring, normal person who really cares about boring stuff. I enjoy so many things, I love science, language, grammar. I don’t care about.. especially ten or twenty years ago, if you were a metalhead or a rock star, people thought you were supposed to be in a certain way. I’ve never been interested in that at all, I just want to be myself. I don’t give a shit about having lots of tattoos because somebody else wants me to have them, certain clothes. I have poor eyesight so I have glasses, and some people think you can’t have glasses and be a metalhead. So many silly things – and I never cared about that at all, it’s just laughable.

They hear my voice and see the riffs, and expect someone ultra-metal, really looking metal. For me, when I go off stage, I’m a completely different person. The guy on stage, he is also me – 100% me. That’s not the guy though that goes to the grocery store and buys milk. When I’m not on stage, I’m like anyone else. I have long hair, although it’s falling off. Sometimes that surprises people. I’ve been in situations where people come to the dressing room after the show to see me, I open the door and people are asking for Niklas the singer of Wolf. I say and I am the only one in the room – yeah it’s me. They will repeat that, and it’s surprising. That’s happened to me a couple of times. I have no need to be anyone else other than myself, or impress anyone.

I’m not ashamed that I enjoy books, art, a period where I was doing watercolor. I enjoy it, I love so much nerdy things, I don’t care what people think about this. People in metal are more open-minded, and there are a lot of metalheads that don’t look like metalheads at all. They just enjoy the music. I remember a couple of years ago, that wasn’t really the case. For me, metal is something I express when I write songs, and play on stage. I have no interest in trying to impress people when I am off stage. I don’t need to be in the center of attention when I walk into a room. When I am on stage, then I want them to look at me, listen to the band and pay attention to what we are doing.

Dead Rhetoric: What records as of the last say one to three years have made a great impression on you – or do you find yourself still reaching back for a lot of the 70’s/80’s classics to fuel your passion and love for heavy metal?

Stalvind: Well, there are a couple of records. This is really interesting, as I was never a fan of metal when traditional metal was the thing – Iron Maiden, Judas Priest. And then when Metallica came along, it was really never my thing. I thought always like Metallica, Anthrax, and Megadeth was kind of all the same thing. It wasn’t for me – then a couple of years ago I heard the latest Megadeth album Dystopia. I was reviewing it for a magazine when it came out, and I was completely blown away by it. Turned out, it’s fantastic, so I listened to all the old records, from the first to the second, the third, and I ended up liking the latest album the most. And that has happened to me several times – the latest Annihilator album, I love it. I think it’s phenomenal. The same with Rush – Rush is a fantastic band, Moving Pictures is a fantastic album, but the latest album they did Clockwork Angels, it’s amazing. It’s weird, albums and bands when you discover when you are young, those albums become so special to you. It’s hard to impress with the next album, but on many occasions they release albums that are better and better.

Another band I love is Angel Witch – before I only listened to the first album. Then I discovered their latest album Angel of Light that came out last year, it’s fantastic. I think it’s the best they have done – but if you say that to some old Angel Witch fans who remember discovering them when they are 14, they will say the first is the best. You mention Firepower, and I’m really impressed they were able to channel that energy.

Dead Rhetoric: How do you see the next year looking for Wolf in terms of activities? Will the public have to wait six more years for the next studio album?

Stalvind: No, I hope not. We have a solid rhythm section, we have a great band now. I’m super excited, I have written three new songs already, but we are preparing for the tour. I will continue writing, and I have been sent ideas from the other members. If we don’t tour so much on this album, then we will write more. I’m really excited, and the next album where it will take us artistically. The three songs… they are very interesting songs. We don’t have an opening track, we don’t have a title track, or a concept. I’m excited to go on the next journey to see what will come out. I’m inspired by the new musicians, and when I write music in my studio I can hear them in my head, what they would do with these songs.

I don’t think we will hire an outside producer for the next album, I think we will do everything ourselves. That’s the plan right now – we are looking forward to playing live. We will see what happens, it’s pretty exciting times for me. As far as The Doomsday Kingdom, we are all excited to do a second album – but Leif and Candlemass are going great now, and he’s fully occupied with that. He may have two or three secret projects nobody knows about. It’s totally up to Leif, he’s the main writer.