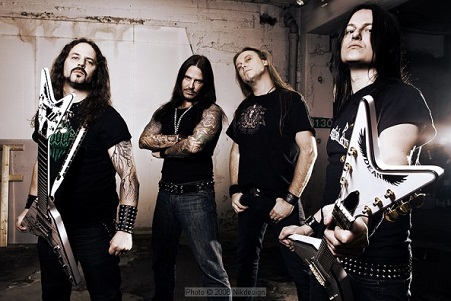 Throughout the past decade or so (Blistering turns 11 this year, by the way), we’ve been subjected to every type of interview possible: from zealous, over-exuberant, verbose metallers (always fun), to humble, but self-assured Euros (fun, but they make you work for it), all the way to uninterested, self-absorbed loafs that would rather be doing anything than talking us (not fun). Selling one’s music is a tricky proposition, something a band must grasp in order to please label types and sell magazines, so when the beaming voice of Wolf lead guitarist Johannes Axeman jumped on the line with yours truly, it was obvious this was going to be a memorable chat. No prolonged sighs, stumbling, or short answers, Axeman oozed confidence and enthusiasm for Wolf. This was almost too easy. And fun.

Axeman has a lot to be excited about, namely the release of Ravenous, the fifth Wolf offering that continues in their now grand tradition of throwback metal excellence. Wolf pulls no punches, they don’t beat around the bush, and they don’t get fancy with us – this is pure, classic metal, loaded with Maiden-loving melodies, a Priest-like vocal concoction, an instant, catchy, bombastic numbers that are the personification of Euro metal godliness. And to top it all off, the album was helmed by none other than super-producer Roy Z (Bruce Dickinson, Rob Halford, Angra) for that extra little something.

Since their 2000 self-titled debut, Wolf have become pillars of the modern classic metal scene, and have become a marvel to watch in the live setting, where stage moves and smiles rule the game. The band gets it and when coupled with a spurt of top-notch albums in the form of 2004’s Evil Star, 2006’s The Black Flame and now Ravenous, Wolf can’t be topped. By anyone.

Since Blistering enjoys classic metal as much as the next guy/gal, we figured we’d hit Axeman up, who just prior to jumping on the phone with us, was addressing his daughter in Swedish. Too bad our Swedish skills are non-existent; Axeman proved to be quite the soundbite provider during our half-hour chat…

Blistering.com: We’re three years removed from The Black Flame, so are you glad to finally get Ravenous out to the people?

Johannes Axeman: Yeah, it’s been a long wait. We had high hopes for this one, but in any band, there’s always changes from album-to-album. For us, it’s not changing musically…we had lineup changes and we changed producers and we knew that we were going to stay true to what Wolf is about – we never had any doubts. We just wished it didn’t take two and-a-half years. We’re very excited now and regarding the reviews and emails, we’re just overwhelmed. When you release your fifth album, people in the business seem to be comfortable in reviewing the album in a way that might not be a 5/5. Comfortable with the band because we’ve been around for so long, but we seem to get really high reviews and we’re very satisfied and excited as to where Ravenous is going to take us.

Blistering.com: How is the band functioning with the new guys?

Axeman: It’s overwhelming…way better than what Niklas [Stavlind, lead vocals/guitars] and I thought. We came to a stage where we had to let Mikael [Goding, bass] go and he’s one of the founding members. It was a mutual decision and we knew he was about to leave. He told us when he was going to do the last gig and so we were prepared for it and we knew Anders [Mood, bass] would fit very well for us because he was in Tad Morose. We were fans of them and they were fans of us, so we knew he knew the songs and I’ve known him for quite a few years and know what’s capable of and he really shined though on Ravenous.

Richard [Holmgren, drums] we found pretty late, actually. The album was already written, but he had his moments where he could put his influence on the songs, which was great. With Richard, we got back to that groove with our first drummer, Daniel [Bergkvist]. It’s groovy in a way, if metal can be “groovy,” I guess. Anders and Richard are on the same level; everything is great and we’re four individuals working as one. We haven’t had that since Evil Star.

Blistering.com: You have a heavy hand in the creation of Ravenous. Describe the working relationship between you and Niklas.

Axeman: It’s great because, if I write something and he says he doesn’t like it, I know he says that looking at the song as a Wolf member. It’s not that he doesn’t like it…he’s the core of Wolf and has that ability to tell me and not many people have that [laughs]. If someone told me that’s not a good riff, I’d probably punch them in the face [laughs]. But Nik has that ability – and I listen – to see the potential in what I write. He usually takes bits and pieces and changes them to my liking. We work very well together and know each other very well – he could be my brother.

Blistering.com: Goal-wise, was it the plan to make Ravenous this sort of fun, catchy, but tried-and-true metal album?

Axeman: I guess, so, but we weren’t thinking in the way that it’s supposed to be “radio comfortable” because we’re not a band that writes “hits,” we write heavy metal songs. If someone wants to make a hit out of these songs, that’s fine – we gotta eat [laughs]. We decided to concentrate on making the songs standout. We have some songs that are totally kicking ass, but are missing something somewhere, like on some of the earlier stuff. Some of them were missing a chorus or something, but this time, we thought, “hey, let’s do some songs with big choruses that people will remember.” People will remember songs and I think we’ve achieved that and working with Roy Z and he made that clear to us.

I can listen to “Voodoo” and think, “oh fuck, this is a kick ass song!” Or “Blood Angel” and go, “man, we’ve really nailed it with this one!” They all have history and it took us two, two and a half years to get the album out there, so every song has to have some meaning to them in a way. If it’s not the lyrics, it might be a verse or whatever. “Voodoo” has a life of its own when you play it live; it’s such a simple song when you play it, you don’t lose your ground because the core of the song is so basic that it will keep you on the line. “Speed On” and especially “Curse of Salem,” where you can go, “that’s Wolf in 2009.”