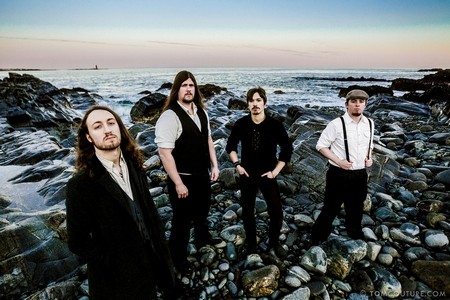 With the growing popularity of folk metal, sometimes it seems like the genre is starting to run out of ideas. So many bands go for either the “epic” variety, or the “party” variety and there’s not much in between. Just when you thought that you had heard everything the genre could offer, enter Massachusetts’ Wilderun. Establishing themselves as willing to go the extra mile with their 2012 debut, Olden Tales & Deathly Trails, the band took a more homegrown approach to folk. Utilizing traditional American folk songs as a backbone, there was something undeniably fresh and compelling about their approach.

After nailing two US tours, the band began writing their second full-length. But the reality of being an unsigned band reared its head and the band did not have enough money to complete the recordings. So they reached out to fans to crowdfund the remainder of what they needed to finish the album. Long story short, it was a success and Sleep at the Edge of the Earth will be released on April 7th. A large jump from an already impressive debut, Sleep marks a significant progression and is bound to be one of the year’s strongest releases.

With all of these goings-on, DR reached out to Wilderun for some more info about the band and received responses from all four members (vocalist/guitarist Evan Anderson Berry, guitarist Wayne Ingram, bassist Dan Müller, and drummer Jon Teachey). We discuss Sleep at the Edge of the Earth, the band’s utilization of folk instruments, and even some craft beer.

Dead Rhetoric: Could you give a brief background on how the band came together?

Jon Teachey: Evan had been writing songs for a potential folk metal band for some time. It was late 2011/early 2012 that he decided to bring together some musicians to make the band a reality. I had been in another band with him at the time so I was pretty much the go-to drummer for the project. I suggested Dan to Evan for bass because he was a friend of mine that I had yet to collaborate seriously with. Evan knew Wayne from some years back. We could tell the band chemistry was going to work well pretty much right away. We all rehearsed like crazy and then went into the studio that May to record Olden Tales.

Here’s a rare side note: Before Wilderun, Dan, Wayne, and I were in a heavy metal band called Chalice with Joe Gettler (guest guitarist on Sleep). This band had about 3 rehearsals and then Wilderun started. Ha!

Dead Rhetoric: Your first album took some direct ties to American folk music. Do you feel that Sleep at the Edge of the Earth still carries in that same direction?

Evan Anderson Berry: All the music on Sleep is original material. We didn’t use any traditional folk songs this time around. It honestly wasn’t really an intentional choice, it just kinda evolved that way (And we’re certainly not opposed to using traditional folk music again in the future, if we feel inspired). Personally, from a songwriting standpoint, it’s just where my head was at, so I didn’t try to fight it.

That being said, I think the album still feels like a fairly natural progression from Olden Tales, musically. Even though the folk songs on Olden Tales were an important element, I don’t think they necessarily were the foundation of the record. We tried to use them more as colors and textures inside a world of our own. And I think Sleep still exists in a similar world.

However, I do think some Americana vibes can still be found in Sleep, most notably in the instrumentation, which has a lot of ties to the first album. We were even able to include some of Wayne’s excellent slide guitar playing this time around, which was a texture we’ve been eager to use for a while now.

Dead Rhetoric: What separates Sleep at the Edge of the Earth from Olden Tales & Deathly Trails?

Dan Müller: I think Sleep at the Edge of the Earth is in some ways a refinement of Olden Tales and Deathly Trails. Many of the elements of Olden Tales are present on Sleep (bombastic orchestra, lush melodies, heavy riffs, etc.) but they’re much more focused on this album. But probably the biggest difference is that Sleep is much more cohesive. There’s a very intentional flow to the album that I think carries the listener through the length of it.

Jon Teachey: Sleep is the heavier, darker side of Wilderun. We each had way more time with the material this time for learning and rehearsal so there’s more musical individuality on this record. Also on this record, we have two and a half solid years of playing as a unit whereas on Olden, we only had about 5 months. I think that really shows on a deeper listening level.

Dead Rhetoric: Was it frustrating knowing that you had all of the music done [for Sleep], but not enough money to get to a finished product?

Evan Anderson Berry: It was definitely tough. The band had just a little bit of money leftover from a couple online sales, but besides that, we had to pull from our own personal resources to even get started. But we wanted to at least exhaust those options first, and show our fans that we did indeed have new material, before asking for the help to get the whole thing completed. Thankfully our fans are amazing, and it all ended up working out.

Dead Rhetoric: Your crowdfunding attempt was largely successful for a smaller band. Were you surprised that it did so well?

Jon Teachey: It was a great pleasant surprise! (thanks again folks!) We hadn’t released an album for 2 years so it’s great to know that people were still willing to give us their attention. We wouldn’t have been able to reach that goal if we didn’t have fans not only sharing financially, but also in a marketing sense. All of the social media shout outs got the word out and that was hugely valuable in reaching our goal.

Dead Rhetoric: There are a number of “traditional” folk instruments (dulcimer, mandolin, etc) that are used in the band. How do you decide the balance of what to use in each track?

Dan Müller: A lot of that was decided during the orchestration process. Evan had all the songs written and demoed beforehand so it was all a matter of deciding what melodies and what parts called for what instruments. We tried to be a lot more conscious of overusing certain instruments and at the same time, making sure that instruments wouldn’t be too spontaneous and appear out of the blue.

Evan Anderson Berry: I think the key was just listening to what the songs wanted. Not trying too hard to force certain instruments into inappropriate places, just because we wanted to use it. There were a few times we’d go to track a mandolin or a dulcimer part, listen back, and realize it didn’t belong. So we’d cut it, or rearrange. It definitely takes patience, and persistence, to realize what colors the songs need to come alive, but its worth the effort. At least, I sure hope it was! 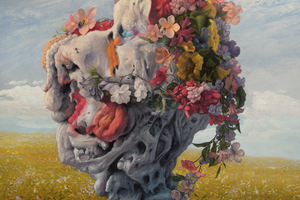