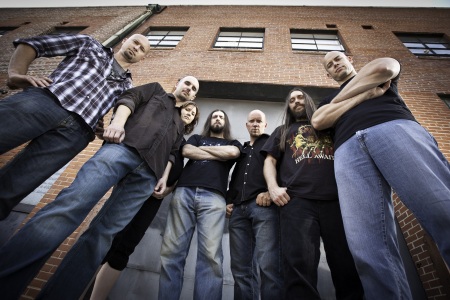 After a period of self-discovery, Phillips decided to put While Heaven Wept back into priority, and along with acquiring Irving, work quickly began on Vast Oceans Lachymose, an album that almost killed Phillips. “We were going for days and days at a time in the studio. I physically collapsed from exhaustion – I thought I was having a heart attack. That’s how we did it – it was whole-hearted, everything we had. It’s just unbelievable to think about the significant life changes and circumstances for all of us. We haven’t stopped since. It’s what I needed to do to be able to sit here and have this conversation today and not be a miserable drunken bastard [laughs]. Just to have some sense of normalcy.”

Once the dust settled on Vast Oceans, and the parade of superlative-laden reviews had set in, Nuclear Blast Records came calling. Already pleased with their then-label Cruz del Sur Records, Phillips and co. decided on working with the German label only if a few stipulations were met, marking the first time they literally put pen-to-paper on a deal.

“That decision was made instantaneously when the offer was put on the table. Up until this point, we’ve never signed a contract with anybody. It’s always been a gentlemen’s agreement. It’s all about relationships with us. The thing with Cruz, we didn’t have anything to complain about. We were ready to doFear with Enrico [Lecesse, Cruz del Sur owner]. It just happened that within a month of the Hammer of Doom festival in 2010, that’s the point when Nuclear Blast contacted me. The conversation developed that lasted for months. It wasn’t necessarily about While Heaven Wept. Just the state of industry, etc. It came to a point to figure if there was something more to all of this.”

As Phillips describes, Nuclear Blast went to bat for WHW, even as bigger names like Sepultura and Destruction were being added to its roster. And the deal presented was just what the doctor ordered. “Within 30 seconds of receiving the agreement, it was clear that everything we would require was right there in writing,” he says. “It was signed. Once we got to the full contract, that was a matter for lawyers [laughs]. This isn’t our first time around the block. It resolved several issues that are close to my heart. A lot of people need to realize that in this day and age, it’s hard to justify spending the same amount of money on a house that you would on an album, but to have it stolen.”

With the Nuclear Blast promo machine in full-swing (Phillips phoned Blistering already in the midst of a two-week press run), the most pressing question behind While Heaven Wept is not whether Fear of Infinity will be a success, but if the band can manage to tour and give it the support it deserves. For Phillips, this is nothing short of a complicated issue.

“The reality is that, in subsequent, there have been more babies born. Everybody in this band has a ‘real’ career. The reality is that I do this [music] because I need to – mentally, emotionally, and spiritually. The rest of the band members do it because it’s something they really love to do and it’s not about fame or fortune or anything else. For them, it’s making the music they want to want to hear on their own stereos. When people are wincing about it, we’re still just as in debt, even worse.

“That being said, everyone is willing to make sacrifices and go out and do shows,” he finishes. “We’ve been more active on the live front than in years. Jim [Hunter, bass] and I are the only ones that are ready to do this full-time. The rest of the band kinda gave up and crossed the bridge for a secure, domestic life. It’s a little tough. Jim and I are ready to live on the road, but it’s not so easy for everybody. Everyone is so integral; I’m not even sure what the bottom line is. It may involve us using surrogate band members if we have to. It’s understood that’s what we might have to do. I’ve been doing this for so long and we all have paid our dues and…to have the options and turn them down is unacceptable.”