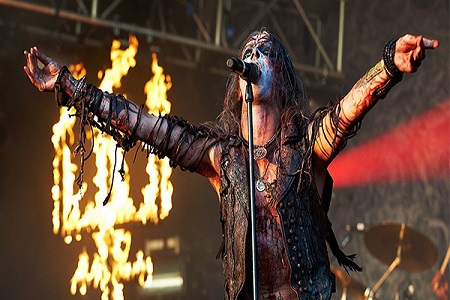 Over-the-top by today’s standards of zero presentation, fondness for nature, and intellectual stuffiness (read: Cascadian black metal), Sweden’s Watain thrive in their role as adversary to the conventional. The serious-as-a-heart attack manner in which they approach the black metal framework reverts back to the mid-90’s when one’s appearance mattered as much as the music, yet Watain has never gone down the path of instant headline-grabs or publicity stunts – they’re simply the embodiment of what black metal should be, that’s all.

The band’s forthcoming The Wild Hunt (Century Media) effort is the obvious next step in their evolution. Foundational numbers like “All That May Bleed” and “Sleepless Evil” provide the carry-over from 2010’s excellent Lawless Darkness, but it is the somber balladry of “They Rode On,” as well as the instant catchiness of “The Child Must Die” that speak to Watain’s growth as songwriters. Above all else, it’s black metal at its most visceral and detail-oriented, the result from years of hitting the touring circuit, and never forgetting one’s roots.

Band leader, vocalist, and mouthpiece Erik Danielsson took some time out from his ever-busy schedule (“Lots of promotional stuff going on”) to talk to DR about Watain’s gradual climb, the new album, life as a train-hopper (!), and the man’s stint in Dissection, a band Watain has rightfully taken the torch from. Read on…

Dead Rhetoric: It seems like everything you’ve done of late has been on a bigger scale. I think a lot of us can remember you coming up with Casus Luciferi and Sworn to the Dark, but leading up to The Wild Hunt, things are of greater scale.

Erik Danielsson: It’s the way it goes, I guess. We’ve been doing this for 15 years and people have come to understand that we’re a force to be reckoned with and you have to let the fans do that, and business people, too. To be honest, things have changed very literally in the world in Watain. To us, it’s very much the same thing, the same purpose in our lives. From where we stand, nothing has really changed, but at the same time, we have more and more people working, we have tour agencies and management and whatever that are taken care of this and this. So I suppose it’s a reflection of how people relate to the band. It’s rather something that matters more for other people than us.

Dead Rhetoric: And it’s not like you’ve let this “success” prompt a change in sound…

Danielsson: There has been a change in sound. The sounds are definitely different, but they’re certainly not changes of anything remotely related to success. At the same time, the band itself grows on an outside scale where people see us getting bigger, we progress as well.

Dead Rhetoric: Do you see Sworn to the Dark as the major turning point for the band?

Danielsson: [pauses] I don’t know…every album has been a turning point in one way or the other. I think that records like Sworn to the Dark  is a very definitive one from the outside is because we started to work with labels that were a bit more high-profile, that had more reach. We got a lot more press and that’s one of the reasons why people see Sworn as a turning point. For us, it’s hard to say if it was a turning point, but it had little to do with the attention and more to do with the fact that at our points in our lives, we were 25 years old and the whole Watain thing had encompassed everything in our lives. There was not one hour of the day where something not relating to Watain was going on. With Sworn, it was a point in time where we realized there was no way back and we were to uphold Watain until the time comes. That was a very important insight and it contributed to our determination and conviction.

Dead Rhetoric: A lot of bands are very stingy toward people handling their finances or doing business for them. Are you comfortable with all of these new faces handling important matters like this?

Danielsson: I would say this has to do with business, which is the least of my concern when it comes to Watain. I would say one of my greatest, well it’s not really a concern, is the emphasis we put on keeping integrity and making nothing external or from the outside world that reflects on the band’s artistic work. That’s the main thing for me. As far as I’m concerned, having management and labels staying on top of things contributes to that, so we can focus only on the relevant parts, and there are people taking care of the more mundane aspects of the band. There are things to the business side that are so boring and uninspired that I can’t imagine how they do [it].

Dead Rhetoric: You toured quite a bit for Lawless Darkness, so prior to recording the new album, did you take any time off to recharge your batteries?

Danielsson: Time off is a very alien concept for me [laughs]. Like I said, everything I do is related to Watain and between the last tour for Lawless which was with Behemoth and starting to write the new album, I actually spent quite a bit of time in the U.S. jumping trains and doing very stupid and dangerous things. Then, I went to Transylvania and that was the foundation for what helped define the new album.

Dead Rhetoric: Did you say you were jumping from train-to-train?

Dead Rhetoric: That’s a bit of a lost art over here. I don’t know of many people doing that any more.

Danielsson: It’s something I’ve been wanting to do a for a long time. It has a sense of freedom that I value immensely, especially coming from the tour scenario, where pretty much everything is scheduled and structured, so going from that to hanging out with hobos, was very refreshing for me.

Dead Rhetoric: Those guys had no idea you’re Erik from Watain.

Danielsson: Yeah, they had no clue [laughs].