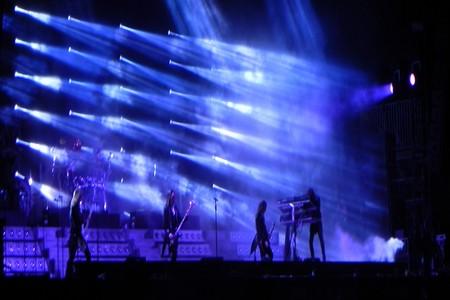 Full disclosure, I’m a huge Rob Zombie fan. Be it his music, movies or artwork, the man can do no wrong in my book. I had always wondered if he would ever perform at Wacken and now that the question had been answered, there was no way I would be missing his set in front of thousands of screaming metalheads.

Zombie has always been known for his circus-like, over-the-top live shows featuring tons of pyrotechnics, elaborate light shows, giant monsters roaming around the stage, and all kinds of video clips from animé and cartoons to B movie footage, but for this European festival trek Zombie left all of his toys at home, save for a couple stage props and the giant video screen on the True Metal Stage, which only showed live shots of the band and crowd. Zombie has undergone a number of lineup changes over the years, but the current incarnation featuring John 5 on guitar, Piggy D on bass and Ginger Fish behind the drum kit is the tightest the band has ever sounded.

Beyond the obligatory “More Human Than Human” and “Thunder Kiss ’65” White Zombie staples, we also got “Super-Charger Heaven” as well as solo hits “Superbeast,” “Living Dead Girl,” “Meet the Creeper” and the oh so groovy “Never Gonna Stop (The Red, Red Kroovy).” Perhaps the biggest surprise of the set was the number of covers we were treated to, including James Brown’s “Get Up (I Feel Like Being a) Sex Machine,” the Ramones favorite “Blitzkrieg Bop” and bits of “Enter Sandman” and “School’s Out.” For “Sick Bubblegum,” giant beach balls were tossed into the crowd for added fun. “Teenage Nosferatu Pussy” and “Dead City Radio and the New Gods of Supertown” from the latest album received positive responses and the band closed with “Dragula.” Zombie may not have had all his usual bells and whistles this time around, but he and the band proved they don’t need them to deliver a high intensity, energetic and fun show!

Where do I begin? I’ve seen TSO nearly 20 times, making it an annual holiday tradition and sometimes even multiple times a year. As excited as I was to see what the group had in store for a German audience in the middle of summer, figuring they would forgo their usual Christmas-themed performance, one of the major reasons I was returning to Wacken for a fifth time was the long-awaited reunion of Savatage. As if that wasn’t special enough, Jon Oliva, Paul O’Neill and Wacken co-founders Thomas Jensen and Holger Hubner got together and cooked up a truly history-making performance that had Savatage and TSO performing on both main stages simultaneously exhibiting the same lights, lasers, and pyrotechnics while performing the same songs. It was truly a sight to behold!

But let me start at the beginning. As previously mentioned, I was positioned in between both main stages, which gave me a view of each stage, as well as the massive video screens flanking each stage, to ensure I didn’t miss a single moment of this once-in-a-lifetime opportunity.

Savatage began the proceedings on the Black Metal Stage. Following an intro of “The Ocean,” the band launched into “Gutter Ballet” and immediately followed it up with an absolutely crushing “24 Hours Ago.” Hearing the Mountain King himself, Jon Oliva, live is truly a privilege. His booming voice echoed over the open fields and cut through the wind and rain, and I was doing everything I could to soak it in. Chris Caffery and Al Pitrelli traded leads and shredded solo after solo, no doubt making Criss Oliva smile from above, and Johnny Lee Middleton kept things anchored with his bass playing. I’ve always enjoyed watching Jeff Plate bash the skins during TSO performances each year, and though he was a bit tougher to see on stage from my vantage point, there was no question he was bashing those skins. The 40-minute opening Savatage set was over way too soon, but before the band left the stage, we got to hear “Edge of Thorns,” “Jesus Saves,” “The Storm,” “Dead Winter Dead,” and “Hall of the Mountain King.” Then, making way for TSO, Jon asked us to listen to his friends and directed our attention to the True Metal Stage.

It was TSO’s turn to dazzle us with a 40-minute set of their own, which included not only live debuts of new songs, such as “Madness of Men” and “Prometheus,” but also “The Hourglass” featuring a duet between Zak Stevens and Andrew Ross. TSO numbers in the set included “Another Way You Can Die,” “Night Conceives,” “Tocatta – Carpimus Noctem,” “Beethoven” and “A Last Illusion.”

Having finally seen Savatage live and hearing the debuts of new TSO songs, I could have returned to the camp happy right then and there, but luckily for us the bands were just getting started. What happened next was truly unforgettable and I don’t hesitate in saying was possibly the most incredible live performance I’ve ever seen! Both bands returned the stage at the same time, Savatage on the Black and TSO on the True, and delivered a jaw-dropping, awe-inspiring performance for the ages consisting of Savatage and TSO numbers, including more live debuts of new material.

The joint performance started with “The Mountain” and “Carmina Burana” before shifting back to Savatage material with “Turns to Me” and “Another Way” featuring Russell Allen. “Mozart and Memories,” “Morphine Child,” the live debut of another TSO song, “King Rurick,” “Believe” and “Chance” would all follow before finishing with “Christmas Eve (Sarajevo 12/24)” and “Requiem (The Fifth).” An abundance of flames (on both stages) and fireworks accompanied the last two songs, signaling the end of an utterly remarkable feat. I really hope the entire performance was recorded for a future live DVD so everyone has a chance to see it.

After witnessing that, there was nothing else left to do. Originally, I had planned to take one more trip back to the Bull Head City Tent to see Architects of Chaoz, Paul Di’Anno’s latest endeavor, however I was exhausted and nothing was going to top what I just saw, so I headed back to camp and crashed. Friday, the first full day of music, lay ahead and it was starting early with Angra at 11 a.m. for me.