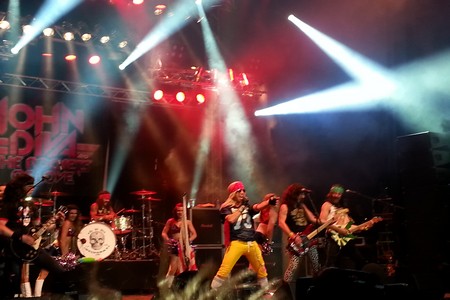 Mambo Kurt has become somewhat of an institution at Wacken over the years. A guy that looks like Moby and plays an instrument that resembles a miniature organ called a heimorgel is not the first act one would think of booking on the biggest heavy metal festival in the world. Wacken co-founder Holger Hubner initially had his doubts about Mambo Kurt as well, but after giving him a chance some years ago on a small side stage and seeing audiences quickly outgrow the area, Mambo Kurt has become an annual festival favorite among the founders and fans alike. It’s hard to believe in my four previous Wacken excursions I hadn’t found time to take in a full Mambo Kurt set, so I made sure I wasn’t going to miss him this year. Dancing to heimorgel covers of tried and true classics such as “The Final Countdown” or “Killing in the Name” is some of the most ridiculous fun you will have at Wacken, and who could forget the “Super Mario Bros.” theme wall of death. If you make it to Wacken, do yourself a favor and see what Mambo Kurt is up to.

Next up in the tent on the Headbangers Stage was New Model Army. I knew very little about this band, so I planned to take in their set while waiting for Uli Jon Roth to take the WET Stage, and besides the rain hadn’t let up outside so there was no better place to be. A decent sized crowd had formed on the right side of the tent for the U.K. post-punk/alternative rockers. They reminded me a bit of a cross between The Clash and Black Star Riders, leaning more toward the latter. Wacken is all about variety, and whether it was the melodic catchiness of “March in September” or the deep drumming of “Devil’s Bargain,” the band delivered a tight set that the audience responded to, closing with “I Love the World.”

Although Europe closed out the night in the tent, Wednesday evening belonged to Uli Jon Roth, who put us all in trance with his mesmerizing yet majestic guitar playing. It’s always a special treat to see Uli in the live setting and he and his band commanded the stage effortlessly, delivering a set comprised entirely of early Scorpions classics, including “Pictured Life,” “The Sails of Charon,” “We’ll Burn the Sky” and “Virgin Killer.” This was my third time seeing Uli and like a fine wine, he just seems to get better with age, as each time he finds a way to elevate things to the next level. Uli closed out an all-too short set with “Dark Lady.”

As previously mentioned, Europe were the final band in the tent on Wednesday night. Following Uli was no easy feat, but the Swedes turned in a great set filled with hits and newer favorites alike, from “Scream of Anger” and “Sign of the Times” to “Praise You” and “Days of Rock ‘n’ Roll.” I had the opportunity to see Europe in March, and while my view of the band was much better at that show (there wasn’t much space left in the tent by this point), seeing them a second time was no less enjoyable. Europe rocked Wacken, as the late hour of Wednesday evening bled into the wee hours of Thursday morning. From my vantage point to the right of the stage nearly on the barricade, I could really only see John Leven and Joey Tempest, twirling the mic stand and belting out the note after note, for the most part, occasionally catching glimpses of John Norum shredding away. The entire band was on fire, as the performance was being filmed for a live DVD. “Rock the Night” and “The Final Countdown” were of course highlights, but it would be “War of Kings” and “Firebox” that would stick in my head throughout the rest of the week.

Although the tent was preparing for two hours of karaoke, Europe’s stage exit was my cue to head back to camp in hopes of warming up, drying out and getting some sleep in preparation for day two. With it being 1 a.m., I thought for sure the rain would have stopped by now, but no such luck. I donned my poncho for the trek through the mud and wet back to camp, which actually was a bit longer than it should have been as I got lost wandering around the campgrounds on the way back. Eventually I stumbled upon our camp; Simone, Tom and Sebastian were already fast asleep. It wasn’t long before I joined them in slumber as the rain continued to fall.