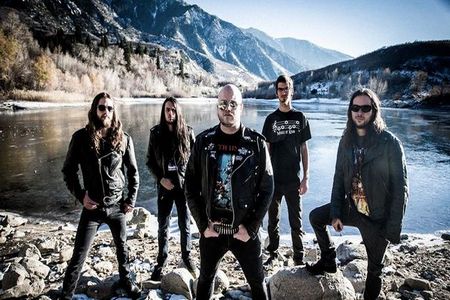 There is a certain subset of the metal population that seems to think that traditional heavy metal has passed its prime. That there’s no more room left in the genre for any new or original ideas to be maneuvered into songs. But to the toughened cynic, couldn’t the same be said for all the metal genres? Alas, what keeps us going is a band’s ability to keep us entertained. As with most metal genres, more and more new traditional heavy metal bands pop up every day, but there’s something special about Visigoth.

Hailing from Salt Lake City, Visigoth is primed to explode their way onto the metal world. The Revenant King, their debut album, harkens back to the days where heavy metal was all about the epic riffs and powerful melodic vocals. There’s a definite charisma factor to the band that is beyond their years. So DR phoned vocalist Jake Rogers to get some more information on the young band, including finding a band name, how they signed to Metal Blade, and more.

Dead Rhetoric: As a band from Utah, where did you get the inspiration for the name Visigoth?

Jake Rogers: It’s really just because it’s hard to find names that haven’t been used. We kind of compiled a list of potential names for our band and we were going through them, and Visigoth was the first one we landed on that hadn’t been used by a professional heavy metal band. That was kind of bewildering to us actually, because it seems so obvious. It evokes heavy metal imagery and it fits the aesthetic and it sort of puts forth what we wanted our sound to be like. It just fit and we used it, and it just kind of stuck. We didn’t really discuss it beyond that.

Dead Rhetoric: So did you just search on Metal Archives?

Rogers: Yes, we did the preliminary Metal Archives search, which any metal band worth their salt does before they name their band these days. And we checked last.fm as well, as it’s a pretty good gauge as to whether or not there is a band out there we listen to called Visigoth. Of course, there were a few Myspace bands and some bands that didn’t really release any material or play gigs to any extent to make us think that the name was really “taken,” so we rolled with it.

Dead Rhetoric: My other question related to Utah; has it been harder to establish a local presence in a market that is not really a huge metal market?

Rogers: Locally, no because the local scene here is pretty awesome. It’s small, it’s very small, but because of that it’s really tight-knit and very supportive. All of the real metal bands, I’m excluding metalcore and deathcore and whatever new genres that I don’t really consider to be metal and I don’t think any of the metal scene here does either, so I can’t speak for those bands or that scene. But the metal scene, the death/black/thrash genres, we are all friends. So establishing a local presence isn’t really that difficult because you start playing gigs and people come out and they dig it. Our scene is mostly dominated by black and death metal, with a couple thrash metal bands too. So for us, it was interesting being the only band playing a more traditional metal style, as opposed to an extreme style. But it works because all those guys dig our music, and we are all fans of black and death metal so it’s awesome. So we usually do gigs with extreme metal bands, it’s a lot of fun.

Dead Rhetoric: Speaking of your style, it’s a harder sell in the United States with traditional metal. What are your hopes in terms of building a presence here in the States alone, as it seems that Visigoth would be an easy sell overseas in Europe?

Rogers: I think there is a strong underground for traditional heavy metal in the United States. I think there are a lot of people who are really into it right now, which is cool. I think that there’s a lot of younger kids that have gotten tired with the more modern sounding bands that are doing hybrid genres and want to dig into the roots of the genre, which is what we are coming from. I think that a lot of people in our general age group have felt that way and that’s why we are seeing a bit of a renaissance of it. It’s not maybe the public view or what lands on the covers of the big magazines in the US, but there’s definitely an underground infrastructure for it. That’s’ really where our niche is, and where we have a lot of support coming from. It’s not too bad really, I think that it’s been pretty easy to resonate with people who are interested into traditional and epic heavy metal.

Dead Rhetoric: What do you feel is the backbone if you are forming a traditional heavy metal band today, as opposed to back in the ‘80s?

Rogers: For me it’s important to show love and respect for your influences. I love bands that wear their influences on their sleeves. Some bands may try to put on airs that they are doing something really original, and that’s cool for some bands. But for traditional heavy metal, there’s no way that you are going into it doing something truly original, because it’s rooted in tradition. So for me, wearing your influences on your sleeves is awesome. That’s something I really respect when I see another band. Hearing a riff ‘that this riff is a nod to this band’, or’ this vocal line is a nod to that band,’ and we do that a lot. Just understanding and respecting your influences, really putting a lot of passion and effort into understanding the roots of the genre – the history of heavy metal. Understanding the roots and history of the genre is what allows you to successfully implement those aspects that you are trying to use in your own band. For me, I love exploring the history of heavy metal and finding albums that were released before I was born that I really resonate with and finding bands that are doing it right now that are really killing it in that traditional heavy metal sense.

Dead Rhetoric: You’ve opened up recently for King Diamond and Raven. What do you take out of being able to be able to share the stage with some of these really high profile acts?

Rogers: It’s absolutely insane that these things have happened for us. We were never really planning on having this kind of visibility. So being at the point where we are playing with King Diamond, Raven, and playing the Ragnarokkr Metal Apocalypse with bands like Riot and Grim Reaper. We are playing with these bands that we look up to and worship. Not only is it an honor, it’s completely out of left field for us, that we managed to hit this point. We expected to play gigs and be really underground and now it’s kind of blowing up on us. King Diamond rules the world when it comes to heavy metal. So it’s kind of a cool opportunity to watch these legends and see what it is that makes them tick – what makes their stage performance so awesome, what makes their stage sound so massive, what makes their live sound so tight. Hopefully we can learn from those things and apply them to our live shows, I think that’s important for us.

Dead Rhetoric: How did you hook up with Metal Blade?

Rogers: Our first demo was recorded on a personal computer in Lee’s [Campana – guitars] dorm room. We were in school together, so he and I just kind of sat down in his dorm room and knocked out the [Vengeance] demo, just the two of us. Programmed drums, and really, really demo level shit. So we recorded it and just kinda put it out there on the Internet. Then we recorded an EP [Final Spell], which had a much more professional treatment. Semi-professional this time, we recorded the drums in a studio. Everything else was recorded in friend’s bedroom studio. He did a really awesome job mixing and mastering that for us. We put that online for free. We really didn’t do any promotion, we just make a Facebook page and put the music up for free download.

Somehow it reached the ears the head of Swords and Chains Records. Swords and Chains was a brand new label at the time, and we were asked if we wanted to do a cassette release of our Final Spell EP and Vengeance demo and we said yes. We thought that would be awesome as we had no physical format of any of our releases at that point. I believe it was the first release that was done on Swords and Chains Records, and that caught the attention of Sarlacc Productions, which is an Irish record label. The guy who runs that was talking with Mike (of Swords and Chains Records) and got our music and dug it. So Sarlacc and the mighty Cruz Del Sur record label out of Italy, which is one of my favorite labels ever, dug it and put it out on vinyl. The head of Sarlacc Productions is friends with Alan Averill (Primordial) and he sent Alan the music and he really dug it. So he got it into the hands of the Metal Blade office and they checked it out and watched a video of us playing live on Youtube. Alan was the one to hit us up and actually talk to us about it. So they are the ones that made it happen.