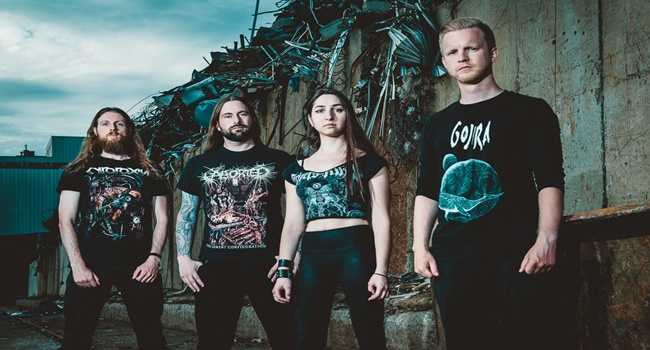 Delivering a progressive death metal mixture of songs that are equal parts intricate as they are heavy, German band Virocracy have quickly developed a buzz around their sound since starting in 2018. Their second album Ecophagia is an outstanding conceptual effort, mesmerizing in its versatility and infusion of influences across the modern and old school platforms. We reached out to vocalist Anika and guitarist Alex to learn more about their early musical memories, insight into the two albums to date, the importance of video work during the pandemic downtime as well as through social media, live performances, and future plans.

Dead Rhetoric: What are some of your earliest memories surrounding music growing up? At what point did you start getting into heavier forms of music, and eventually wanting to pick up an instrument and perform in bands?

Anika: I have always been someone who actively listens to music. As a child, I used to bother everyone asking, ‘what are they saying?’ whenever I liked a song on the radio but did not understand the lyrics. I started playing the piano when I was eight years old and was an active member in the choir most of my time in school.

My desire to perform in a band (as a keyboardist back then) arose when I was about 13 or 14 and had just discovered rock and metal music. It took me some more years finding the courage to do so, though.

Alex: My father has always listened to heavy music. Even when watching videos showing myself trying to walk, there’s Led Zeppelin or Black Sabbath playing in the background. When I was about 10 years old, I started watching music videos on MTV 24/7 being crazy about hip-hop and rap. When I turned 14, I started listening to Nirvana, Foo Fighters, or Green Day which made me pick up the guitar when I was 16. I then turned to the traditional thrash metal of the 80’s growing ever more into heavy music up until now.

Dead Rhetoric: Virocracy started in 2018. What do you remember regarding the formation of the group, those initial talks/rehearsal sessions, and did you know straight away the style of progressive death metal you wanted to develop, or was it a feeling out process to arrive at things?

Alex: When we started, I wanted to basically continue in the style. I had always made music until then, namely, my solo project Illunis. However, our first drummer inspired me to write more complex and heavier music. From our first song on our first album “Walking Ghost”, to our most recent song “Bruteus Alpha”, we have come a long way in my humble opinion.

Dead Rhetoric: Prior to releasing your debut album in 2020, the band would issue two singles over 2018-19. How did those initial recording sessions go, and what type of response/feedback to you receive on these two tracks?

Alex: We recorded two demos on our own accord. We generally received quite positive feedback, mostly from fans who visited our concerts, friends, and family. It was with our first release produced in a professional studio setting that people from other places throughout the world listened to our music and gave feedback.

Dead Rhetoric: Irradiation is the debut Virocracy album – what are your thoughts and memories regarding the record at this point? How do you feel about the songwriting and recording sessions, and do you feel that Black Sunset was able to promote the release well to get the band bigger within the underground?

Alex: Irradiation holds a special place in my heart. For over ten years, I have always dreamt of playing in a band that records an album in a studio. So for me, the album will always be a milestone in my life. Compared to Ecophagia, the songwriting was completely different from what we did on the new album. I was in a different stage of life with different people. We were quite glad that Black Sunset gave us this great opportunity, showing great trust in a band like us.

Dead Rhetoric: How did the band gain the interest of Apostasy Records for the latest album Ecophagia? And where do you see the major differences between the new record and the debut? Were there any specific areas the band wanted to grow and expand on in terms of sound, style, production, etc.?

Anika: Apostasy heard about us when we were at Iguana Studios for the mixing/ mastering sessions with Christoph Brandes – whom they also contacted, indicating interest in the new material. That is how we got in touch.

One major different between the two albums was our approach on the songwriting. While Irradiation was mostly put together and discussed during rehearsals, Ecophagia was completely written at home due to the pandemic and lockdowns. Each one of us would work on their own parts and we would regularly meet via Skype to discuss the progress and new ideas to improve the songs as they grew within the context of the whole album concept. We were a lot more focused on connecting the songs with each other so they would form a well-rounded entity (than we were when composing Irradiation). Everything was recorded right away so that we always had an up-to-date demo version (and pre-production) to listen to and continue working on. Taking these versions to the studio also helped a lot finding the perfect sound!

Dead Rhetoric: Where does the band come across on the lyrical content? Do you place as much importance on what you try to convey with words as you do the musical compositions?

Anika: The link between music and words is a very important aspect of our (especially Alex’s and my) work. I do not like generic and overused phrases in any musical genre, but that would not be suitable for our content anyways. My main job as a vocalist is expressing emotions through voice, lyrics, and phrasing, so of course I always strive towards giving the 120% of heart work that everyone else is giving in this project. Hence, I perceive writing lyrics as quite a demanding task! And singing them as well, clearly as possible, with guttural vocals is also a personal goal of mine.

Dead Rhetoric: How challenging is it as a band to come up with intricate, musicianship filled elements while also maintaining a semblance of hooks, melodies, and grooves from composition to composition? Does this make the process involved and complex from initial seeds of an idea to the final output?

Alex: Some riffs on our new album were written as early as 2019. So it does take a lot of time for a song to ripen. On Ecophagia, it helped to have the story at hand and find the right tunes to underline the respective story element. I even tried to place musical themes of a similar nature in different songs to interconnect them.

At the moment, I am writing new music without any concept at hand, which will probably make the new music turn out differently. Another great challenge is to find the right balance between brutality, complexity, and ‘digestibility’.

Dead Rhetoric: Tell us about the video shoot for “Devolution” – how did you decide on the sequences of outside shots and band performance elements? What are your thoughts on the importance of videos and the visual medium during these social media platform times – do you believe it helps aid the promotional avenues of a band like yourselves?

Anika: It definitely does help having a well-produced video that expresses the ‘vibe’ we want the listener to feel when consuming our music. Especially during times without live shows (like the past two years), most of a band’s communication with the public takes place on social media – which is much more visually-oriented than ever before while the attention span probably keeps on getting shorter. With our “Devolution” video we wanted to create a blend of the technical aspect (playing/ performing the song) and the dark mood that the song transports musically and lyrically, as concept-wise it introduces a dystopian setting that perpetuates on the whole album.

Shoutout to our friend Mick who filmed and edited the video and immediately understood what we were all about! We are really happy with how it turned out.

Dead Rhetoric: What do you think are some of the biggest challenges Virocracy currently faces in establishing yourselves more within your genre and building up the following of the band on a global scale?

Alex: We need to find a permanent member on the drums and more opportunities to showcase our music to the world.

Dead Rhetoric: How would you describe the outlook of Virocracy when it comes to performing live? What do you want the audience to take away from the band, and what have been some of the most memorable performances you’ve done to date?

Alex: I hope we can soon play at larger venues and festivals. We received the feedback that Anika’s voice blows people away live. The guitars are always tight and our bass player Flo, apart from playing really well, also looks really handsome when headbanging and showing off his tattoos.

My favorite Virocracy concert was in Tübingen, where we were headlining the Metal Newcomer Night in 2019. With my previous band Boiling Blood, I played in a swinger’s club in 2016. I will never forget that.

Dead Rhetoric: How do you view the state of death metal in your home country and globally? What excites you about the movement, and what changes (if any) do you think need to be made for the better of all parties involved?

Alex: Germany has some great death metal acts. However, we ship many CD’s and shirts to Latin America and see many of them commenting on our content and music. I love the emotion that death metal can evoke. You can be extremely brutal and aggressive and still place beautiful elements in it. However, I’m not particularly excited about the ‘movement’ or the culture I must say. I’m more in it for the music.

Dead Rhetoric: What worries or concerns you most about the state of the world today? If you had unlimited resources, finances, and time/energy to be able to tackle any specific issues, what do you think we need to concentrate on the most for the greater good of humanity?

Alex: Climate crisis and humans not willing to change until it’s minutes to midnight. Humans rule the world and spread like a virus – this Virocracy will hold sway until we actually want to make the world a better place refraining from selfish benefits that mostly stem from our wealth.

Dead Rhetoric: What’s on the agenda for Virocracy over the next twelve months? Do any of the members have any other bands, projects, or guest appearances in the works that we should know about/ look forward to?

Alex: We already have some concerts on the agenda and are looking forward to play our new songs live for the first time. Regarding other projects: I also play and sing in a punk band called Krankheim. What started as a stupid, fun project turns out to be great fun as this genre is the complete opposite of what we do in Virocracy. In June, we will play our first concert. Apart from that, I am writing Pink Floyd-style music with a friend in Düsseldorf and I am currently working on a song where I play all the instruments and sing. I’ve always wanted to be like Dave Grohl.