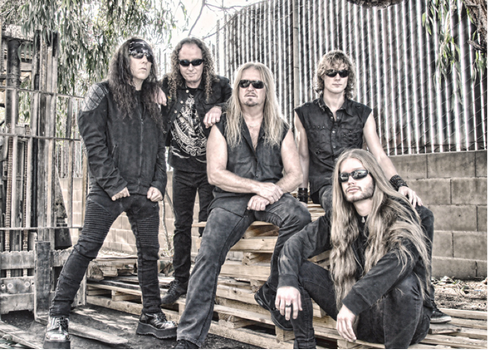 Dead Rhetoric: What exactly went down to cause Brian Allen’s departure, and how did you find Dutch vocalist Nick Holleman to replace him? Because Nick certainly is capable as proven on your recent touring excursions in Europe and North American to handle all facets of the VR career vocally…

Thorpe: Brian…he’s a single father and he has three kids. Our workload just became too much for him. The best way to say it is life got in the way. I had a full US tour booked in 2013 that I had worked for months on and it was a very important tour for us because we hadn’t toured the US in quite some time. I was in a real bind, Brian became more and more unavailable. I don’t look down on someone for trying to take care of their family, you know, that’s commendable. At the same time, I’m a lifelong Vicious Rumors guy, my life is geared to do the band, that’s #1 to me. I’ve made a lot of sacrifices for my family and my personal life to do Vicious Rumors, and I can’t just stop because someone decides something is more important than something else. I understand it. I was in the Netherlands, and Brian slowly… at first he was like ‘I can only tour for four weeks’. So I made sure it was only for four weeks, then he told me he could only tour for two weeks, and then he couldn’t tour at all. I was less than a month away from the tour.

He put me in a very hard position and I didn’t want to cancel months of work so, I was in the Netherlands and I was at my friend Toine (Vanderlinden) and Nancy’s house, good friends of mine. He plays in a band called My Brother Jake. We were sitting around the table and we were talking, he had this look on his face. He knew this young guy, a real talented guy that has the range to sing our material. Boy, he was right, that’s how I met Nick. Nick is the first guy out of all the guys that I hired on the spot without having him audition for the band. I sent him the music and just had him sing a couple of the Vicious Rumors songs on video, with no music. He just nailed it better than anyone we’ve ever had do it. We hired him on the spot to do the tour, after the first or second show I offered him the slot in the band. He’s an amazing talent, and Brian had become more and more unavailable. We got very lucky to find him when we did- and the same thing with Tilen, initially he came in to fill in for a tour- but the way he played the bass fit in so well and he had so many great ideas. I couldn’t say no, and I never had any intention in getting these European guys in the band. But the chemistry is right, that’s what makes magic in a band, having the right people and working things out well- when you find that special chemistry, you have to go with it -even if it means a little extra work.

Dead Rhetoric: How do you feel that US tour in 2013 went for the band to rebuild the profile?

Thorpe: It really made me realize that I should have… you can always look back on your life and say, ‘if I would have done this, if I would have done that’. It’s just the way life is, it takes you in different directions. The European audience has always been number one for us, they have embraced us on a much bigger scale ever since our very first album. We’ve been playing in Europe steadily throughout our career, but the American market is very important to me. I’m an American, there are great fans here. We just have a lot more opportunities in Europe, so we followed the opportunities and followed the money. With every band you have to have funds to keep things going. It’s like the baseball player that goes and plays in Japan, you go where you have a passion for something and you go where it’s good. It’s definitely been a rebuilding and something we want to continue doing. We are certainly planning on touring in support of this album Concussion Protocol in the United States, for sure.

Dead Rhetoric: Where do you see the state of heavy metal in 2016? Are there new areas and territories that you think can open up for Vicious Rumors to possibly tour and conquer?

Thorpe: I absolutely do. Wherever metal fans… you can’t fake it with metal. The metal fans know when it’s real and they know when it’s fake. They know when it’s forced or when you are trying to do something that isn’t being yourself. We operate on fire and passion, doing what we do. If people are responding to this album around the world, I don’t see any limitations at all. We just want to keep the ball rolling. We are also like one of our songs on the record, the “Last of Our Kind”. Metal has changed so much over the years, but for us we are lucky that we have these fans that just keep coming back and now they are coming back with their younger brothers and their kids, so they turn the people onto a younger generation. People show up sometimes and bring pictures of me and them from 25 years ago… I usually look much better than them (laughs). I’m just playing with you. It’s incredible that we’ve had such a great run, it’s incredible to see young people discover us. I just don’t think there are any limitations, we will go wherever there is a demand, the open road.

Dead Rhetoric: Have there ever been any misconceptions regarding Geoff Thorpe as the leader of VR or personally that you would love to clear up?

Thorpe: (laughs). What are you trying to say, big guy? (laughs).

Dead Rhetoric: Sometimes people in the press are a little unclear about the fact that, you guys have been together as a band- and you a part of Vicious Rumors since the start at 1979. So there will be a lot of changes that occur, lineup changes especially- because what band stays together in its original incarnation together for 37 years?

Thorpe: Yeah, thank you very much for saying that. Because I always get the misconception that I am a difficult person because of all these member changes. But it’s exactly what you said, just try to keep two people together for 37 years in a relationship and that’s hard to do. Now how about five members. Any band that has been together half as long as us has lineup changes- when you think about metal… Iron Maiden, Black Sabbath, Judas Priest, Death Angel, Testament… any long time band there are always member changes. It’s not that I’m hard to work with, I’m focused and have the energy to take the band into the future. Life goes through changes, people change plans and goals and when they do that’s okay. If I can survive the death of Carl Albert then I can survive anything. I am a guy that loves to do what we do and I still feel I have a lot of creativity left in the tank- if we are on the same page we move forward together as a team. Any time you have something going this long, change comes with it. People need to remember that, and not just blame me for it.

Thorpe: That’s interesting. I would have said to stay strong, stay healthy, have a balance when it comes to life. Hold onto your dreams. Be true to your heart. That’s probably about it.

Dead Rhetoric: Being a sports fan and living in the Bay Area, are you loyal to your local professional teams or do you have particular favorites from other areas?

Thorpe: How did you know I was a sports fan? I am a huge sports fan of all the Bay Area teams- the 49’ers especially. But some people are very territorial, I just love the Bay Area for all its teams. I operate Vicious Rumors as a team, I may be the leader but I definitely give credit to everyone. I’m way into the Bay Area, we are spoiled with the teams like the A’s, 49’ers, etc.

Dead Rhetoric: Vicious Rumors has always been about delivering top notch performances in a live setting. Have you ever had any dangerous situations in terms of weather or travel to deal with on the road – or specific injuries on stage that were scary?

Thorpe: Oh god, yes. Flying in Mexico City during a very wicked thunder and lightning storm, we weren’t even sure if we were going to make it on the ground safely. We played a festival back in 2014, we rocked as hard as we could be and our guitar player Bob was really headbanging away. He brought the body of his guitar neck up and Nick hit in the face. It was near the beginning of the show, he had a broken jaw and still finished out the show.

Dead Rhetoric: How do you see the next 12 months playing out for Vicious Rumors in terms of tours, promotion, video work… have you ever thought about doing a possibly long-form documentary effort on the band?

Thorpe: Absolutely. We are coming up on a 40-year anniversary, and I never thought I would ever say that. We do intend to do something special for that for sure. We are already confirmed for the main support for the Dirkschneider tour in Europe- as he’s doing two plus hours of Accept. He’s doing the classics and it’s been a phenomenal success- it’s going to be from October to December. We will also be doing some summer festivals, like Bang Your Head festival, and some other tours I would love to confirm but can’t quite yet. We are working on something for the US, and we’ve already spoken to some promoters to do some tours.

Dead Rhetoric: To end, what has been some of the best ‘vicious rumors’ ever told about members of the band past and present in the 37 year plus history?

Thorpe: Oh you don’t have time for that bro! I think I have a very good eye for talent, and we’ve had a lot of very talented people in and out of the band. We are band that has been together for three decades, so anybody that wants to put me in a box of where I was 25 years ago can look like an ass. We are moving forward, we are just doing things the best that we can do it. We love heavy metal and we love the fans, we are nothing without the fans.