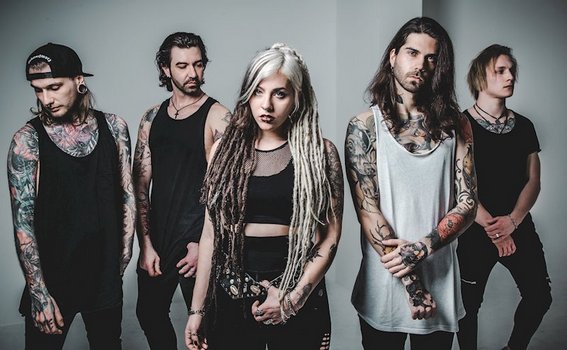 Injected with some fresh blood after losing two members following the release of their debut full-length, Aspire, Venues returns with Solace. With a new guitarist in Valentin Hahnemann and clean vocalist Lela Gruber, the band set their sights on a heavier base to build off of. Solace succeeds because of it, wielding some catchy melodies alongside more frantic modern metal riffing and growls. We spoke with both vocalists, Robin Baumann and Gruber, to get some insight into the band’s new framework and tweaked sound, as well as their conceptual batch of videos leading up to the album release, and their goals for the future.

Dead Rhetoric: Lela, you are a new member, as well as guitarist Valentin [Hahnemann]. What do the two of you bring to the band?

Robin Baumann: They definitely brought in their personal influences as we are a very democratic band when it comes to songwriting. Especially when it comes to Valentin, since he’s a big fan of progressive stuff, so he tried to bring in a lot of influences when it comes to his favorite bands. So you can hear some more technical and progressive stuff. Lela brought in her voice, which is a big personal thing, as well as her way of singing. I tried to convince her to do some really high vocals, she likes to sing lower tunes.

Lela Gruber: I think it’s important to say that since Valentin joined the band, Constantin [Ranis] isn’t the only songwriter anymore. Constantin used to prepare and write all of the instrumentals in the first step of songwriting, and now Valentin also wrote a few songs for Solace. They share this position now. It brings in diversity to the album. With me, musically I bring my own style because I wouldn’t be a good singer if I just tried to sing like someone else. I guess the biggest thing for Valentin and I is to help Venues grow as a band and take the next step to continue the vibe, but in a different kind of way.

Dead Rhetoric: Solace has a heavier, more metallic feel than that of Aspire. What that something you were aiming for to start?

Robin: Yes, this was a decision we made. We wanted to be a bit more metal – heavier and harder, and a little less poppy. We had made that decision after releasing Aspire and I think it worked out.

Dead Rhetoric: How else do you feel Solace differs from your debut, other than the heaviness?

Robin: On many levels, I’m very happy with the new lineup and setup, it’s really awesome to work with Lela and Valentin. They were a perfect fit to our current line-up. It’s the best construction of the band that we have had when it comes to writing songs and performing live, but also being together on tour, being in a van and just talking shit. I think it’s something you can also hear on Solace. Everyone had a free hand when it came to their instrument as long as everyone was happy with it. Everyone was able to put a part of themselves into the record.

Dead Rhetoric: With the new members and musical direction, do you feel you have found your ‘sound,’ so to speak?

Robin: Yeah, that’s a tricky question but yes for now. It always changes and everyone is developing. The world and our members are changing, so I’m not sure what we would say in a few months, but this is what we want to sound like now, and we are very happy with it.

Lela: I feel the same – we should stay like this, but keep the opportunity open to grow and let the next album sound a bit different while keeping the typical Venues sound and vibe. I wouldn’t say that we have to stay in one direction, strongly. The ground structure should stay the same, but there’s a lot of room for new expressions. At the moment, we are very happy with the sound and outcome of the album.

Dead Rhetoric: How important is the interplay between the two of you, vocally?

Lela: I think it’s really important as we both have to sing the songs on stage [laughs]. So when we are writing the songs, we are talking a lot, and when we get into the lyrics we talk about how the songs make us feel. If one of us has a story or feeling that they want to express, we also check to see if the other person can get into the same feeling. If so, we write the song and the lyrics. We each write the lyrics for our own parts. I write the lyrics and vocal lines for the clean parts and Robin does the shouted parts. We talk about things a lot and get into the same vibe to keep it authentic.

Robin: For me this time, I put a lot of personal stuff into the songs. I didn’t do that with Aspire, where we wrote more about things that were going on in the world and more general topics. On Solace, I put a lot of personal experiences and stories that happened to me in the songs. It’s great because I feel I have a much more intense relationship to the songs this time and it makes the songs more precious to me. There were a few songs that I didn’t like as much when we were working on the instrumental parts but when I added the personal lyrics they became some of my favorite songs. So it’s something I want to continue on future tracks.

Lela: I would say it’s the same for me. The inspiration for the lyrics is life – friends, moods, different situations and feelings. The lyrics are a good way of expressing emotions and telling stories. When I think back to being 14 years old and sitting in my room listening to music and really feeling the lyrics. I knew exactly what the singer was trying to tell me. That’s what I want to give our listeners. I want to deal with situations in my own life, and maybe on the other hand, I want to help our listeners get their own feelings out because of our songs.

Dead Rhetoric: Can you discuss the videos that you have been putting out for “Uncaged Birds,” “Shifting Colors,” and “Rite of Passage” in terms of their connected story?

Lela: When we decided that we were going to shoot some music videos, we worked together with our film maker, Marius Milinski, who had already shot all of Venues videos before I had joined the band. We knew that his work was good, we knew how he does the work and shoots music videos. So we gave him the whole album to listen to and only told him that we would live to shoot some crazy, weird stuff and that he had total freehand to do what he wanted. He came up with the idea of a story that continues with each video and he came up with a zombie concept. We were all in agreement so that’s what we did.

Dead Rhetoric: Do you feel that with no touring, you really need to make the videos stand out in order to grab people’s attention?

Robin: Yeah, that was the plan at least, I would say [laughs]. We told Marius to create something very bizarre and that they would share so that maybe it could go viral. We have no chance to play live or win fans in the live shows, so we really wanted crazy music videos. We are happy with the outcome.

Dead Rhetoric: It is nice to have someone that you can give that creative freedom to that you know will come out well and suit the band?

Lela: Yeah, and we did the same with our cover artist. It’s from the same artist that did Aspire, Venera Red. We gave her the whole album to listen to and she just created what she felt and it fit perfectly.

Robin: When it comes to Marius, the funny thing is that he was in my first band back in 2008. He left our city and created his own company and started creating music videos on his own. Now he’s like a big fish in the industry. He’s not shooting anymore videos, just a few here and there. He’s too busy, so we are very happy that he took some time to shoot all of our videos.

Dead Rhetoric: As we were talking about, there’s no touring now. Who would be a good fit for Venues when things open back up?

Lela: Someone like Spiritbox would be cool to tour with. Female-fronted but also heavy. Even though I don’t scream, Robin does. I think that would be a good fit.

Robin: Also, bands like Bring Me the Horizon or Architects would work out pretty well. Especially with genres, all the borders seem to slowly be fading away. For us, I don’t know what we are right now – maybe some modern metal, post-hardcore, or whatever. I think there are a lot of bands that are somewhere in between genres. It’s pretty cool as we have a much wider area where we can play shows with bands in different genres.

Dead Rhetoric: What has the band been doing to keep busy during the pandemic times, and what are you looking forward to as restrictions ease up?

Lela: It’s easy that we are saying that we looking forward to touring and playing live as soon as possible, and as much as possible. In the last year, we have been pretty busy writing songs, recording music videos and the album. We were lucky to have something to do, as it was the only thing that kept going while the world stood still. Even though we weren’t able to meet in person for rehearsal and jam around, we managed to write the album – a completely new way for all of us. It’s also the first one we did with the current line-up. We did it by home-recording. Each one of us recorded their own parts at home and passed them on to the next one to put their ideas on top. It took some time but the outcome was great. It might not be so different, as there are many bands that work that way. It would have been great to meet and play the songs to try things out, but we are very proud that we managed to make it even though there was a pandemic going on.

Dead Rhetoric: What goals do you have for the band, going forward?

Robin: Play as much as possible as soon as COVID is over, especially with bigger bands that we are fans of. Another thing we will do is after the record comes out, is to start songwriting again. So that we will have a big pool of songs to hit the studio with to pick and choose what goes onto the record. Also, to hopefully have really successful releases with our upcoming singles before the album comes out and shoot two more music videos for the current album, which we are looking forward to now.

Dead Rhetoric: Is there anything else you are working on outside of those things?

Lela: We are lucky to play two shows this summer and we are preparing for those. A streaming festival called Metal Frenzy. There is no audience, so we will see how that goes. The second one will be a distanced show, so there will be an audience but they will be seated. It won’t be a typical concert so we are very curious how it will turn out. We are really looking forward to it since it will be the only chance to get on stage this summer. 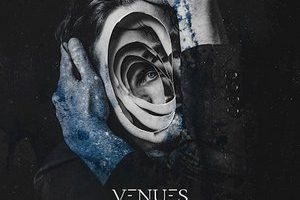