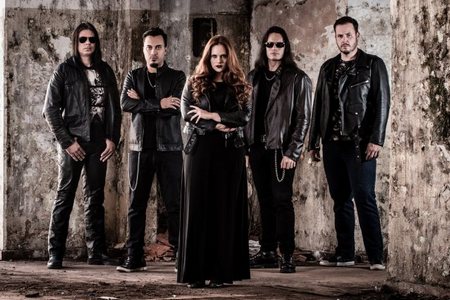 There’s something to be said for bands that can pull off power metal at the heavier end of the genre. They can take what works best with it, but also inject a bit more aggression in without spoiling the template. Brazil’s Vandroya is one such example – offering up headbangable riffing with a clear bite behind it, but still being able to unleash an emotive ballad at the drop of a hat. Plus they’ve carefully inserted more prog elements without causing it to lose its soul.

The band’s second full-length, Beyond the Human Mind, was recently released at the end of April. Honing in on what worked last time around with their debut One, another key selling point are the vocals of Daísa Munhoz, who can command the band at it’s heaviest, but also keep them grounded in more mellow and melodic turns. We were able to send her some questions in regards to the band’s early days, their “progressive power metal” tag, and more. Munhoz’s responses can be read below.

Dead Rhetoric: The band did a demo, Within Shadows, in 2005 and then went dark for a while before releasing One in 2013. What happened in those years between releases?

Daísa Munhoz: A real big mess happened. This demo became very popular here in Brazil, which left us quite surprised. However, at that time, the band had some problems, lots of lineup changes and every time a member leaves it’s like starting from scratch. It was then that we decided to take a break for who knows, one day, to come back stronger, with a solid lineup and to record our album. This return happened in early 2012 and by the end of 2013 we managed to release our much-desired album.

Dead Rhetoric: You recorded a special EP for the band’s 15th anniversary last year, and included a Bryan Adams’ “Heaven.” Why did you choose that particular song?

Munhoz: It was Marco’s (Lambert) idea. He used to talk a lot about recording this song. Also, we needed an mp3 for our acoustic version of “No Oblivion for Eternity” which was available only at YouTube. So we thought it would be nice to put them both together in an EP.

Dead Rhetoric: You were also involved in Project Aegis outside of Vandroya – what was it like to be a part of that?

Munhoz: I had been introduced to Matt’s work not long ago, but I had already become a fan. So when he made the invitation, there was no room to say no. Working with such a great composer and musician and with all the talented artists involved was mind-blowing. The fact that all the income of the song is reverted to the refugees in Europe makes everything gain more meaning and purpose.

Dead Rhetoric: Who do you see as the biggest influences for either yourself, or Vandroya as a whole?

Munhoz: We are all influenced by lots of artists, bands, styles, which is great when you’re composing. Vandroya in its beginning was very influenced by European melodic metal bands and hard rock. And as we grow up as songwriters, we incorporate all sorts of influences and it broadens the horizons, forms a vast field to be explored.

Dead Rhetoric: Coming off of One, what were some of your goals that you wanted to achieve with Beyond the Human Mind?

Munhoz: First of all, we did want this album to be a sign of our evolution as a band and artists, in a way that reflected all the work we’ve been through in its processes. We believe that, besides it is a goal for us as individuals and as a band, it is also something that values our fans and thanks all the support we’ve been having over the years. We put a lot of heart in this album, and hoped it could be transmitted to everyone who enjoys our work. Secondly, we want to spread our work more, to be able to reach more people and fans, which are an inspiration to us.

Dead Rhetoric: The album has been released for a few weeks now, how do you feel it has been received?

Munhoz: I knew the album was good stuff, but I have to confess that I was nervous about it, because our debut was very well received and you never know what people will think about your new work, since comparisons are inevitable. Surprisingly, the response has been even better than we had with our first album.

Dead Rhetoric: There’s two softer tracks, “If I Forgive Myself” and “Last Breath,” in addition to the more traditionally heavy tracks. Where’d the inspiration come for these two songs?

Munhoz: I don’t know. It’s a Vandroya thing, maybe. We are really into soft songs. “Last Breath” was actually the first song we wrote for this album and at that time we were thinking about releasing it as a separated single from the album. “If I Forgive Myself” was the last song Marco and I composed. By the time we finished all the songs, we were in love with them so we decided to put them both on the album.

Dead Rhetoric: You did a video for “Why Should We Say Goodbye” off of One. You’ve had a lyric video so far (I’m Alive”), but will we see a full-blown video for a song off Beyond the Human Mind?

Munhoz: That’s the plan. We love making videos and fans like to see bands in videos as well. We are working on some cool stuff, but release dates have been not decided yet.

Dead Rhetoric: What does the term progressive power metal mean to you?

Munhoz: Labeling kinda sucks, but I actually like this one. It means basically our main influences as metal fans and also musicians, which are reflected in our sound. In this sense, Vandroya has this power metal backbone, with all of its energy, speed and traditionalism, but also flirts with progressive, a term that means freedom for me, adding some cool twists in the songs. We usually don’t think about labels, for everything today brings lots of influences and it is actually very rich. But, we also believe a label helps the fans to have an idea of what to expect from us, even though, sometimes, there is one surprise or another on the way.

Dead Rhetoric: Has Vandroya had much in the way of touring opportunities outside of the Brazilian scene?

Munhoz: We’ve been having lots of exciting fans requests and even some suggestions. But we haven’t had an actual proposal for a tour abroad. It is actually one of our dreams and goals with BTHM. Who knows what the future can bring us?

Dead Rhetoric: Everyone always associates Brazil with Sepultura and Angra – what’s the metal scene like in general in Brazil?

Munhoz: Brazil is actually full of amazing bands like the ones you mentioned, and also has tons of smaller bands that make our scene very rich and exciting. If you google “Brazilian metal bands” you’ll be surprised with the result. Bands like Soulspell, Hibria, Nervosa, Hangar, Almah, Tuatha de Danann, Korzus, Krisiun, Semblant, NervoChaos, Torture Squad, VoodooPriest, Shadowside and many more have become very well-known in the world. Brazil is nowadays route for the most important metal concerts and still has a solid underground scene everywhere you go and Sepultura and Angra helped a lot by telling the world Brazil is an amazing and inexhaustible metal bands source. But for smaller bands, like us, its never that easy. In general, the underground scene supports these bands, but the scene itself has limitations. The biggest problem here to small bands concerns “the concerts” and the relation between producers-bands-audience. Of course this, somewhat, weakens the scene, but it doesn’t seem to be dying at all. The underground always finds a way out of its own weakness.

Dead Rhetoric: After releasing two full-length albums, what’s the next step that you feel Vandroya needs to take to get a more world-wide presence?

Munhoz: We are focused on our concerts in Brazil, but of course playing in other countries is one of our goals and we are ready for it, but this is something that needs to be very well planned, and right now we really want to do concerts in Brazil as much as we can. We are preparing the tour and seeking for partnerships to play more and more.

Dead Rhetoric: Does the band have anything planned now that Beyond the Human Mind has been released?

Munhoz: We’ll keep on going. The disclosure of the album as well as the videos ahead to come and the concerts will keep us busy for now. Even so, we never stop thinking about the next steps, the next album. Lots of good stuff is coming. 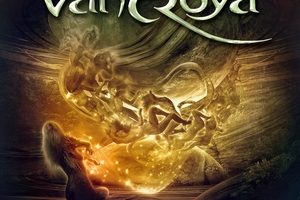