Vallenfyre – Reign of the Shadowking 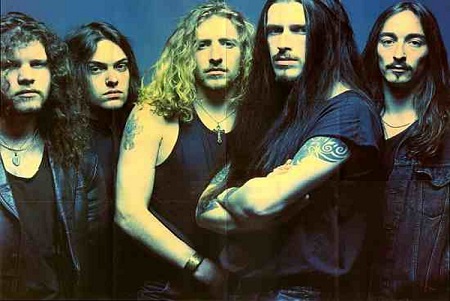 Blistering.com: With Paradise Lost, you have certain parameters, but with this, there was no guide other than your influences, so that had to have helped.

Mackintosh: It started slowly, I would say. When I first started to get the music together and after a couple of months doing it, I got back into swing of it. Once that happened, it was like a real trip down memory lane, exchanging demos and it grew from there. Our enthusiasm for it grew quite a bit.

Blistering.com: Switching over to Paradise Lost, you’re in the studio at the moment. What’s the update?

Mackintosh: We started last Sunday and Adrian has five or six tracks left to do. He’s almost halfway there. He’s got it nailed. All we have now is drums and ghost tracks. I don’t think he wanted to let anyone down – he had a few nerves coming in because it’s his first album with us. He’s definitely nailing it.

Blistering.com: Adrian is far and away the most technical drummer you’ve had in the band, wouldn’t you say?

Mackintosh: The music on this new record is inspired by classic metal and classic doom metal; there’s no keyboards or anything. It lends itself well to his style anyway. I knocked [out] the demos and told Adrian to have artistic license on them and we’ll see where we are. At the moment, I haven’t gone in to check anything out because he’s doing such a great job. I can hear him through the studio door, though. We’re in the middle of fucking nowhere [laughs].

Blistering.com: That has to lend to a nice working atmosphere.

Mackintosh: It does, but it’s fucking boring [laughs]. There’s not even a pub here. There’s one pub up the road and it’s being refurbished.

Blistering.com: With the new album, are you staying with the same style you did on Faith Divides Us, Death Unites Us?

Mackintosh: It’s a hard one to describe. I’d say more it’s more melodic thanFaith Divides Us, but it’s more guitar-oriented, there’s more guitar leads…melodic riffs. Like I said, if you’re a fan of Icon-era, “True Belief” kind of stuff, you’ll like it.

Blistering.com: Wow, you’re really going back now. Plus, Gothic turned 20 this year. How does that make you feel?

Mackintosh: How do you think it makes me feel? [laughs] Fucking ancient. It’s cool, though. I’m happy with everything we’ve ever did. No matter what turn we took, I’m not one for regrets. We might not be here today if we didn’t do various other things. I think if you mix it up over 20 years, it helps you keep interesting in whatever you’re doing. We wouldn’t have the passion for the heavier stuff if we didn’t try other things.

Mackintosh: I think all we did was grow up on record. It’s what people naturally do in their lives. You get into a certain style of music as a teenager and I had a strong passion for it, I was completely blinkered, I wouldn’t listen to anything else. When I got into my 20’s, you start to experience other things and you think, “That’s alright. This is cool.” It was a very honest development and people thought of it as selling-out, but is selling out, selling less records? I don’t know what is [laughs].

Blistering.com: People wanted you to keep making Gothic and Shades of God over and over again.

Mackintosh: Right. I always remember around the time of Draconian Timeswhen we were recording it, we all had very long hair. There was a cover piece in Kerrang! magazine in England which called us “Hair metal.” It pissed me off, and all of us off so much, we decided to do a left-turn and go against it because that’s not what we were all about. I think the press took it in a direction we didn’t want it to go, like this new Metallica thing and personally, I never even liked Metallica. As you get older, it’s come full-circle and for me, it’s very natural. The Vallenfyre thing is very natural too. It’s something that takes me back to being 17 or 18.

Blistering.com: About the hair thing again: I remember when the photos for One Second came out and you and Nick had shorter hair. What do you remember the reaction being?

Mackintosh: I thought the reaction was more extreme than I would imagine. It’s strange that everyone cared about why we cut our hair. I don’t know…why do you cut your fingernails? It’s strange that carried on. I mean, I have hair longer now than I did way back in the day. We did a festival two years ago and one of the Arch Enemy guys came up to me and asked, “Why did you cut your hair?” I thought, “Jesus, can’t you people carry on?”

Blistering.com: You just released the Draconian Times DVD where you played it in its entirety. What were the shows like?

Mackintosh: I was the only one was totally against it doing it. It had nothing to do with the album – I come from a punk rock background and I have this stupid attitude where I don’t like signing records for people or climbing over the past for financial gain. I thought it was a little bit of a cheesy thing to do at first. I got talked into it and when we did the first show in Greece, and within the first ten minutes, I understood that I was wrong. It wasn’t what I wanted; it’s about doing something for the people that followed us for that many years. Or the people who got into metal through that album or having been to a metal show in the last 15 years, or the kids that bought Draconian Times and never got the chance to see us play it. It was all about those people and we needed to do a show for me to realize it. It was about the fans of that album, not what I wanted.