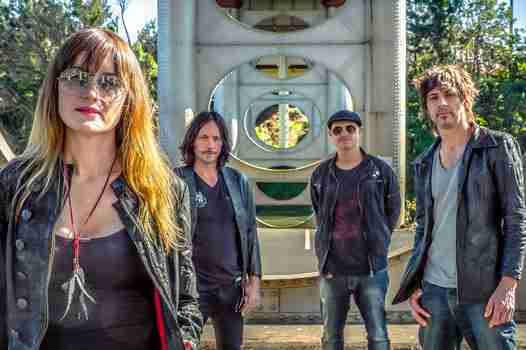 Australian heavy rockers Valhalla Lights, despite having only two albums under their belt, have undergone more than many bands. Their first vocalist, Phoebe Black committed suicide before the band had ever released an album. Black left them with vocal recordings though, which were used to complete their first album Krypton, in tribute to her. Continuing on, they found a new singer in Ange Saul, who allowed the band to continue, releasing My Gracious Highway last year in their home country. With the album now set for release in North America, we reached out to the band, and bassist Brent Crysell and vocalist Ange Saul responded in kind to talk about the impact of Black’s suicide and band rebuilding, My Gracious Highway, and more.

Dead Rhetoric: You lost your former vocalist Phoebe Black in a tragic suicide. Did it force you to grow stronger as a group?

Valhalla Lights: Absolutely. It’s so true with whatever path we take in life, there are always sacrifices to be made along the way. This was one of those big moments for us when strength and growth were propelled into our lives through her death. This paved the way for continued commitment and creativity that can be heard on My Gracious Highway.

When Phoebe did what she did, we were just numb. She joined the band, wrote a bunch of songs with cryptic lyrics, and then went and committed suicide. We should have seen the hidden messages about what she was singing, but we didn’t. We had no idea.

She used us as a way to send her last message to the world before leaving it. She totally used us, and it is unbelievable that we did not see it. She obviously planned doing it because the lyrics were created over a period of months. We should have seen it, but we didn’t, and that is something that we have to live with. The lyrics were so cryptic beforehand, but so obvious after. She totally blindsided us. We were numb when we realized.

Yes, it gave us no option but to be strong. It was so F%$#’ing heavy. We are as strong as F%$ because of the experience. We used the vocals that she left us to create the first Valhalla Lights album, Krypton, which is available only on our website. http://valhallalights.com/krypton/

Here we are now a few years later with a new vocalist, a new vibe and a new album – My Gracious Highway.

Dead Rhetoric: There was a lot of work that was done to get Krypton out following Black’s passing, including a documentary that chronicled the experience. Once everything was said and done, was there ever a point that you thought you should just close up shop instead of finding a new singer?

Valhalla Lights: We had our moment of feeling dull and deadened inside, but now we’re
guided by much of what we experienced, channeling it through our music. If anything, this experience has provided a deeper wisdom, one that has made all of us more devoted and committed to our musical and spiritual path. We are what you would call “lifers”. Playing music is what we do. Just like the band that went down on the Titanic playing even when the water was up to their neck, we will keep on playing until the end. Even in nursing homes if we have to!

It was never a thought of ours that Deon (Drums), George (Guitar) and Brent (Bass) we would stop playing, because playing music is what we do. The real difficulty was the daunting task of finding a new vocalist. This problem was solved when the rock gods sent us Ange Saul. She just appeared and asked to be in band. She has come in and taken us to a new level.

Dead Rhetoric: What do you feel that Ange Saul brings to the vocal table for My Gracious Highway?

Valhalla Lights: Ange brings everything a heavy rock band could ask for and some. Ange possesses a uniqueness in her writing and delivery that doesn’t fuck around. No holds barred, powerful and melodic.

It takes a certain style of singing that can cut through the wall of sound that is a Valhalla Lights set. Keeping a melody, and keeping quality in the delivery is something that takes a lot of control. Ange has the power and control to be able to do that, and she is the perfect fit for Valhalla Lights because of that.

Dead Rhetoric: Did bringing her in represent a fresh start for Valhalla Lights?

Valhalla Lights: Prior to Ange joining us we were all in a really bad place. We had lost our first vocalist to suicide, and that had been devastating. Even prior to losing Phoebe we had been doing it the hard way. To work for a number of years to put together the songs for our first album with Phoebe, and then to lose her in such a tragic was really a low point for us.

Ange joined the band and we then went on a songwriting mission. We pumped out the My Gracious Highway album in a matter of a couple of months. Ange was and is the voice, the energy, the personality that all of us needed in order to complete this musical journey. We feel that everything was predestined for all of us.

Dead Rhetoric: How do you feel that you have grown as songwriters with My Gracious Highway?

Valhalla Lights: We love being self-motivated creators and to hopefully inspire creativity in others in the process. We feel that the more time we put into hanging out, jamming, writing, it significantly improves the efficiency with which Valhalla creates together. And we certainly did a lot of that when writing that record.

Dead Rhetoric: With My Gracious Highway complete, what do you see as being next in the band’s goals?

Valhalla Lights: The backbone of Valhalla Lights (George on Guitar, Brent on Bass and Deon on Drums) has been playing together for around 17 years. We were in “Fort” that did national Australian tours with Clutch (2x tours), Kyuss Lives (now Vista Chino), Fu Manchu, Brant Bjork (USA), Nebula and shows with Monster Magnet, Helmet, the Black Keys. In all of that time we have not had the opportunity to play our version of high intensity rock internationally. The USA and Europe are on our radar for some shows.

Dead Rhetoric: The cover art for My Gracious Highway is gorgeous. Could you talk a little about some of the little details that went into it?

Valhalla Lights: Thanks! The art was conceived by the band, and created by a good buddy of our by the name of Prem who created our vision. Every song on the album has individual art, and they fit together in a mosaic to create the whole album cover. He did an amazing job of putting it all together. Check it out here!

Dead Rhetoric: Much of the PR describes the band as playing ‘volcanic rock,’ in part due to your geographic location. Do you feel it’s a fitting description of what you do?

Valhalla Lights: We come from Byron Bay, which is a small surfing community on the east coast of Australia and is the center of an extinct volcano and is an area that is known for its natural fresh air, stunning beaches, rich volcanic soil and dramatic landscape that has been gouged out by hot molten lava. Yes we get inspiration from our surroundings and we definitely play explosive, hard edged melodic rock, so ‘volcanic rock’ seems to fit us pretty well.

Dead Rhetoric: On your website, there’s several options of buying a drink for the band. It’s a pretty clever idea – where did the inspiration come from for that?

Valhalla Lights: There is an old saying, the best reward an artist can receive is cash! Recording, touring, and even rehearsing costs money, so we wanted to provide a nice way for our fans to contribute without it just being a handout. It is surprising how many people do spontaneously buy us a drink via the website. Their contribution, and the liquor that we buy with it gives us a warm and fuzzy feeling!

Dead Rhetoric: Have you started to prepare any material for a third release as of yet?

Valhalla Lights: Currently we’re writing for another record. It never ends. Everyone in the band has their own subjective musical contribution that resonates with their own personal life. The highs, the lows, there’s always something to write about that helps rejuvenate and cleanse our souls.

Dead Rhetoric: What do you feel is the major draw of a band that plays stoner rock/metal?

Valhalla Lights: The words “stoner rock” are so loaded with meaning. Some people have labeled us as that label, but we don’t necessarily agree that it fits. We play big groove power rock with big melodies and crisp production. Anything with a big groove is always going to sound good. Is it stoner? We’ll let the listeners decide.

Dead Rhetoric: What plans does Valhalla Lights have as move past the first quarter of 2018?

Valhalla Lights: Touring and writing. Writing and touring. Look out because we are coming to a venue near you!