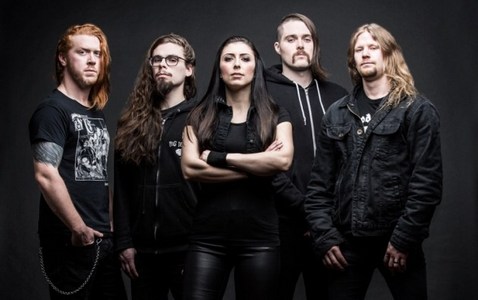 Dead Rhetoric: How do you try to stand out amongst the hundreds and thousands of bands vying for attention on the internet? Especially with the number of recordings available these days… do you see this as a positive or negative?

Slayes: It’s a curse and a blessing. Here are all these platforms for me to get my music out there, but here are all these platforms for millions of other bands to get their music out there. How do you make a wave in the scene anymore? I try to take it one day at a time, one fan at a time. Word of mouth is a great way to travel these days. I try to treat everyone as if we are still hanging out in Victoria at my merch booth.

Dead Rhetoric: Speaking of fans, do you have any interesting stories when talking to them at the shows through the years?

Slayes: There are tons. Especially in Europe- it’s so interesting to see so many fans come from so far. We just did Central Europe, basically bouncing in and out of Germany. A lot of fans came from very far away- one came from far western France to our show in Belgium. We had quite a few come from Italy to our shows in Switzerland. From Hungary to our shows in Austria and the Czech Republic. It was really great to see these people in person that I’ve been communicating with for years online and hear their stories. Probably once a day I get a message or an e-mail that tells us that we helped them fight through cancer and are now in remission. Or being a soldier and help them get through the craziness that being in the military can become. My brother passed away and our music helped them overcome that. The stories can be heartbreaking, but touching that we can help people get through those things. I hope that we can continue to make music that does that for people- that’s all we can really ask for, right?

Dead Rhetoric: Have there been any favorite failure that you’ve gone through personally or in the band, and what do you think you’ve learned from them to become better or stronger?

Slayes: I’m sure there are plenty, I’ve just chosen to forget them! (laughs) Our very first US tour was insane. I would say that was probably a pretty big failure, the shows that came through were great and a great way to learn about the scene in the US. We played the whole continent, but there were only eight shows. Portland, then in the middle of California, then in the middle of Texas, and up in the middle of Minnesota. It was crazy, the driving that we did. That’s what it’s all about, right? Hour upon hour, slugging it out in the van to remind you of why you do this. To keep that need alive, so that the next time that we toured in the United States, we worked really hard to get as many shows booked as possible, promoted the crap out of them ourselves, really organized it to the max. It was exponentially better- I learned a lot about long hours on the road and the great interstates that you have there. Your highway network is incredible.

Slayes: Great. Canada has one highway! And we call it Highway One. It goes from the western part to the East Coast. And we have some highways in the middle of the country, but our main highway… you have massive highways that are connecting every populated hub to the other, we have one. It’s nice to get where you need to.

Dead Rhetoric: And I take it in the winter, if that highway has a massive accident, it shuts down?

Slayes: Oh yes. And it’s so funny when I hear bands say they have a show on December 15th and it’s in Vancouver, and the night before they are in Edmonton. They are nuts- do not tour Canada in the wintertime, especially Western Canada. And this is not a joke, it’s deadly. You can probably search the internet and find five stories right now of bands that have gone off the highway and mountains of British Columbia and Alberta because they are nuts. So, stay in Florida! (laughs). And it’s not to say that I wouldn’t love to go to your shows, it’s insane and a crazy idea.

Dead Rhetoric: What would be on your bucket list of things to accomplish in terms of your music career – or specific places to play/ people to meet?

Slayes: It’s a long bucket list right now, and we are ticking it off one by one. Definitely we want to play South America, Australia, we would love to go back to Japan and maybe even play Loud Park. Any festival we would be down to play- Bloodstock would be a really good one, we’ve had a lot of long-time fans in the UK. Wacken of course, that’s on everybody’s list. Metal Days in Slovenia, it looks so rad and intimate. 70,000 Tons of Metal – it’s a long list.

Dead Rhetoric: How do you see the next twelve months playing out for Unleash the Archers in terms of promotion for Apex?

Slayes: We will stick to weekends right now- have a few shows in June/July. August I would like to have a little bit of a breather- spend a few weekends up at the lake would be nice. If all goes as planned, be on the road from September-November, and again next spring like a March/April thing. Hopefully back in the studio again by the summer. Maybe it would be nice to get some summer festivals booked so we can go record again in Denmark during the summer.