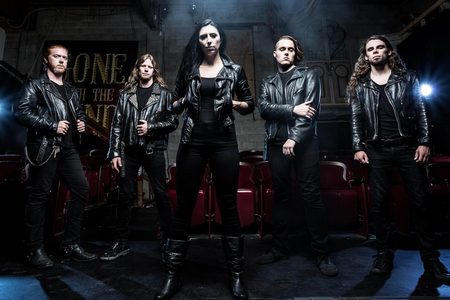 Dead Rhetoric: Being a part of a family business coordinating light sales for small mom and pop stores when not on tour, do you believe there have been specific skills that have also helped shape Unleash the Archers as far as keeping things going efficiently and smooth on the fiscal and business side for the band?

Slayes: Absolutely. I’ve definitely learned a lot working in the family business on how to manage my time between the two of them. Making sure that both are succeeding and that one doesn’t take away from the other. A lot of my organizational skills that I’ve learned have come in handy in UTA- a lot of Excel spreadsheets (laughs). They go hand in hand- they both allow the other to exist. I’d probably be crazy if I didn’t have music- but without this job I wouldn’t be able to afford to tour. They are symbiotic, that’s for sure.

Dead Rhetoric: As a collector of books, what would you consider some of your most prized possessions – and what do you consider a couple of underrated authors that people should check out either in fiction or non-fiction?

Slayes: I would have to say my Black Company series by Glen Cook is my prized possession when it comes to a series. There are a few (standalone) books that are really good. I’m in the middle of this series by an author named Justin Cronin who is about to release the third and final book in his trilogy, it’s in with the fiction literature section of a book store but it should really be in the sci-fi section. Because it’s about vampires creating this apocalypse on Earth, but they are very intelligent and have this crazy mentality. It’s so cool, I read the first two chapters in the store before I realized I was standing in the store reading it- so I decided I needed to buy this. If you haven’t read those, they are incredible.

And then there is Alastair Reynolds, who is a science-fiction writer. I’ve talked about him before, but he’s an actual astrophysicist and he talks about what is really possible when it comes to traveling through space and time, colonizing other planets. He comes from a truth point of view, as opposed to science fiction that we are used to where it’s all let your imagination run wild. He’s got a series – Revelation Space is the first book, and it’s a little trilogy that is fascinating.

Dead Rhetoric: How did Grant your guitarist decide to develop his own label Test Your Metal Records – and what do you think he’s learned from on this end that has been beneficial to Unleash the Archers?

Slayes: I’m not sure what spawned it, but I’m sure it stems from the fact that there is very little support for bands in Canada. We have a couple of provinces that have some grant programs now, when it comes to labels yes there are Canadian bands that are signed but they are often overlooked. It’s hard to make your way in the industry when you are independent, there are more hurdles and obstacles in the way. He wanted to reach out to those bands that are young and upcoming, but also have a lot of potential. Originally these bands would wallow away and remain unnoticed, this was his main motivation. He’s learned a lot when it comes to what makes a good business decision.

When it comes to making decisions as a band, it’s not only ‘this is going to be super fun’, but is this the right step for us to take right now where we are at. Is this going to further us when it comes to reaching our goals, or are we doing this because this is what we’ve always done? Having more of analytical approach to things, rather than just thinking with your heart. Something I think we’ve learned quite a bit.

Dead Rhetoric: When you think about the development of Unleash the Archers, how would you assess where you are at in terms of establishing the profile of the band and do you think about where you would like to be and what it’s going to take to get to that next level?

Slayes: We do. There is some self-reflection, where we think about giving anything to play a particular type of show six or seven years ago. For the most part we like to look ahead and plan for the future. We set small goals for ourselves- there is that dream hovering in the background of maybe one day being able to just play music for a living and not have to worry about day jobs or anything like that. Our goals are pretty realistic and pretty short-term – our next goal is to tour South America, and maybe one day headlining our own tour through Europe. Festivals are big on our list right now- we’d like to get on some of those summer European festivals next year. We aren’t thinking ‘one day we are going to be living in a mansion living off of our royalties’ – that’s not what we think about. There’s no more ‘ah ha’ moment in music anymore.

Dead Rhetoric: How do you handle the speed of technology with thousands of options vying for attention at any given moment? Are there times where you just unplug, unwind, and slow things down by being more face to face and personal with your interactions?

Slayes: I try to be face to face and personal as often as possible. I do definitely take me time whenever I need it. I’m not the kind of person that’s afraid to shut myself in my apartment all weekend long if I need it. Sometimes you sit down every night after having worked all day to 40 messages in your Facebook in box, and some nights I’ll get to it, other nights it’s going to have to wait as I want to watch Westworld.

Dead Rhetoric: I read you have a desire to tour with Iced Earth down the line – what are some of your favorite albums, live shows, or moments surrounding this band? Do you feel a special kinship because of fellow Canadian Stu Block joining the group- because of his long-time work with Into Eternity?

Slayes: Absolutely- I was so excited for (Stu) when I found out that he was the new singer for Iced Earth. Doubly because he’s a Canadian that I’ve always admired from Into Eternity, and because I love Iced Earth. Being such a huge fan, at first I was like – ‘really, Stu?’. He’s a screamer, but I was excited to hear what he could do with the band. Maybe at one point I was disappointed, because Matt (Barlow) was my favorite vocalist for Iced Earth. I knew Stu was going to kill it- when they released the first record Dystopia, it was fine. Just hearing the new tracks from Incorruptible, I’m so stoked to see Stu coming into his own in this band. Getting a little bit more of that Into Eternity feel going on, or a Stu feel really. Iced Earth has been doing what they do for a long time and this new blood helps rejuvenate their sound, creating more excitement. I would love to tour with them- even Iron Maiden would be super awesome (to tour with)- but no one would show up just to see us? Iron Maiden needs no opener- I think Iced Earth would be my dream, that music just speaks to me.

The first album I heard from Iced Earth was The Crucible of Man. The emotion in Matt’s voice and the writing- Jon did such a great job with the guitars on that record, they have their own melodies apart from the vocals that you can sing along with. Something Wicked This Way Comes and Dystopia are my favorites after that record. I wasn’t a big Ripper era fan- it’s funny because (drummer) Scott (Buchanan)… I’m a Matt Barlow-era fan and Scott’s a Ripper-era fan so we have to listen to one another’s choices sometimes. I can respect it, but I think Stu is the best of both worlds. All the planets have aligned.