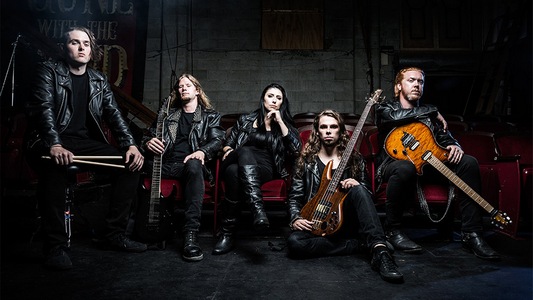 Dead Rhetoric: The first video is “Cleanse the Bloodlines” – another impressive, cinematic effort. How was the shoot, how long did it take, and what highlights or surprises occurred – as it certainly makes quite an impression…

Slayes: Thank you. It was one weekend that we spent up in central British Columbia, in this tiny little town called Lone Butte. We travelled to Falcon’s Rest, which is the sanctuary where the birds lived because it was easier to go to them, rather than have them come to us. Also, the land that they live on is expansive and they have a lot of space to roam free, so there were a lot of different options available to us when it came to the location. So that was really cool- we spent one day filming and then the actors spent one day with all the narrative stuff. When we got there they had already had a whole day of shooting- and the second day was us. And it was really cold! (laughs) But it was really worth it. It was fine once we got the fire lit, because it was really hot – to the point where some of our clothes were lighting on fire. But it was worth it to play through the pain. It was an exceptional experience.

I think the best part was absolute working with Saber, the gyrfalcon. He was our little buddy through our whole video, and he was a total dream to work with. He was relaxed and laid back, so cute- I spent quite a bit of time getting to know him before we started shooting. You can’t just plop him on your arm and say let’s go- you have to have him get to know you. His little personality – it was such a great time and probably something that we won’t ever get the chance to do like that again.

Dead Rhetoric: Do you believe you developed a deeper appreciation for birds as a result?

Slayes: Oh, I’ve always loved raptors and any kind of bird of prey. There is a bird estuary here in Surrey, which is just south of Vancouver where I live. I have to drive through it every time I go to see my parents, and I absolutely love it. There are huge bald eagles and hawks and osprey on every tree. And I’m probably going to get into an accident one day because I always have my face shoved against the windshield, I’m like ‘wow- look at that one!’. They’ve always been really remarkable animals to me, so I was really excited when Richard our director was like ‘okay- I have a falcon for you’.

Dead Rhetoric: I remember reading a specific reply on another band’s Facebook personal page (MindMaze) regarding the struggle sometimes to pick out specific singles for promotional purposes to represent a new album. What weighs most on your mind that you debate, especially when it comes to proper representation of a concept record?

Slayes: Yeah, that was a big part of it. Will this song stand alone, as well as remain a part of the story? Can you understand it without hearing the rest of the album? We felt that “Cleanse the Bloodlines” really did that well. It can be its own track, but really tell a huge chunk of the story if we did a narrative video for it. That’s why it was chosen unanimously by all of us as the first single. We love it as a track, it’s so heavy and I love that opening riff. When we first demoed it and sent it off to Napalm late last year- because you have to demo two songs before they decide if they were going to take us on for the next album or not- that was the one we sent to them and they were very pleased. We were stoked on it the second it was written.

But the second single was the harder part, because there are a couple of tracks on the record, one is my favorite, but another was more like typical UTA with the fast beats. That was difficult, but we decided to go with “The Matriarch” as our second single. There’s no way of knowing which tracks are going to stand out- and for the most part fans will find out about you through the YouTube videos. Even sometimes if they can’t afford streaming services or whatever the circumstances might be, the YouTube things may be the only things they can listen to so you have to be very selective and understand that you are going to choose tracks that you’ll be playing for the rest of your life.

Dead Rhetoric: I agree. You think about Operation:Mindcrime from Queensrÿche for instance. The video tracks for “Eyes of a Stranger” and “I Don’t Believe In Love” don’t necessarily represent the entire record, but also stand out as singles because of the videos.

Slayes: When I think of Operation:Mindcrime, I think of track one all the way through- but those two songs are really fantastic. I think they made the right choices.

Dead Rhetoric: How do you feel the various tours went in support of your last record- as you got the chance to be on some diverse packages in North America headlining with Crimson Shadows as emergency openers when Hibria couldn’t make it through due to visa issues, as well as opening with Anvil and a European tour with Týr and Sirenia? Are there particular takeaways you learn from these veteran bands that you can apply to your band?

Slayes: Oh yes, lots. Especially from Týr – those guys have been doing this for so long, we really did learn a lot from those guys. And they will probably laugh at us when we show up with the same rig and everything. We had been using in-ear monitors for a little while when we did that tour- but they were like ‘no, no no- you should do this, this, this, and this’. There’s always something you can learn from bands you are touring with- whether it’s gear, how to take care of yourself, when to have a good time. We learned quite a bit- but don’t tell them I said that! (laughs).

The US tour went very well. We really want to get back here again, because there’s been quite a bit of growth there. This next route that we take will be even better. Despite the fact that Hibria did miss out on that other tour, it was still a success in my mind- we just had the best time with Crimson Shadows. To be honest, we weren’t huge listeners of Anvil, but we were totally aware of them and of course the documentary plus being trailblazers for Canadian heavy metal. It was a really good time, they were very nice and are absolute veterans of the road. That was eye-opening to see that they’ve worked so hard for so long and this is what we do, this is life. We wish that we could be at that point, we still have day jobs whereas music is life for them.