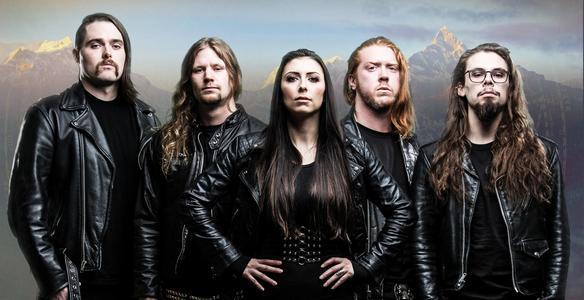 Attaining and maintaining attention in the metal scene today can be a tough combination to maneuver. Let’s face it – possibilities seem limitless to grab everyone’s interest, and soon you are down in a rabbit hole of cute cat videos, prized foodie photos, or streaming your favorite video game channel. Fortunately, even in this current metal scene, there are a few bands who’ve broken through based on strong songwriting and proper visual presentation to put their themes across with conviction. Put Vancouver quintet Unleash the Archers in the running for a break through, presenting a brand of heavy metal that conjures up the fire and brimstone passion of the past but with an added modern edge that gives the band a broader demographic in terms of their audience.

Apex as the fourth studio album is a concept record – developed from the fertile sci-fi/fantasy fascinated mind of vocalist Brittney Slayes, with ten chapters relaying the story of The Immortal and the Matriarch, the challenges of loyalty, family, betrayal, and the quest to live forever. Musically as powerful and diverse as the storyline, the band chose to record the record straight off a European tour run at Hansen Studios in Denmark – giving the record a darker and heavier feel at times. The first single “Cleanse the Bloodlines” with its accompanying dramatic video clip again proves UTA will do everything in their power to give their fans a multi-sensory, moving experience with everything that they do.

Feeling the need to catch up with Brittney regarding the new record, we also covered many other topics during this enlightening conversation. You’ll learn more about the two day shoot of the latest video (and subsequent bird affinities), touring across North America and Europe with Anvil and Týr, lessons learned regarding the family business, and deeper thoughts on one of the veterans of the scene Iced Earth – who they would love to tour with down the line.

Dead Rhetoric: There’s another new bassist in Nikko Whitworth replacing Kyle Shepard last year – why did things not work out and what does Nikko bring to the table that may be different than previous bass players?

Brittney Slayes: Touring is a difficult thing. And we toured the last record Time Stands Still quite a bit. After we finished the run of Europe, the US, China, and Japan, basically Kyle said he couldn’t afford to live this life being away from home for weeks on end and not having a job that can just pay the bills, he was coming home broke every time. We understood, it’s a hard life and not everyone chooses to continue on with it. It was totally amicable, there were no issues or anything.

As for Nikko, his whole life is music. He’s a music teacher, does a lot of session work, works with a lot of other musicians on their projects, so he a long time ago chose to dedicate his life to music. We are really happy to have him on board because he’s ready to go whenever. He’s also insanely talented- by far the best musician in the band now. He added some flair to the new record that we’ve never had in the bass parts before, we are really excited to have him as a part of our family.

Dead Rhetoric: Apex is the latest Unleash the Archers album – a concept record as well. Did you know right out of the gate you wanted to delve into a full-on concept to follow up Time Stands Still – and can you tell us about how the songwriting developed before entering Hansen Studios? Was it a case of music before story, the other way around – or hand in hand?

Slayes: We knew we were going to write a concept album. It was planned from the beginning, and I had written everything out, chapter by chapter, aka track by track – telling what each part of the story it was going to tell, how I wanted the songs to sound, (and) how each track should make the listener feel. Then the boys used that as a guideline to write the record. Sometimes they would bring a riff and they would say ‘I think this sounds good for chapter three’ and I would say ‘no, no- this is more of a riff for chapter seven.’ Sometimes they would bring whole songs, and say that it would be chapter four- and I would say that it would be absolutely perfect, or maybe move it around a bit. A couple of songs in fact got moved off the record completely, because they didn’t quite fit that feel and tempo that we were going for. It was a story before music on this one- but we all worked together and wrote everything together, just like we always do- so everyone had a say in their parts and how the final tracks ended up sounding. It was different and the same at the same time.

Dead Rhetoric: What can you tell us about the storyline- was this something out of your own creation because of your love for sci-fi and fantasy, or did you find influence from certain books or movies?

Slayes: I’m sure there is inspiration from the books, movies, and video games that I enjoy. But I can’t pinpoint an exact one thing. There’s a lead character that was kind of the beginning of it all, that we call The Immortal. And I think he was based probably primarily on the crow character from East of West, which is a graphic novel (created by Jonathan Hickman) out there right now that I’ve really been enjoying. He just was an intriguing character to me- but it’s not specifically based on him. This story follows the Immortal who was cursed at birth to always serve whoever awakens him. So the first song “The Awakening” is him waking up in his little home, and being called by the Matriarch who is our antagonist. She says she needs him to find her sons and bring them to me so I can kill them in this ritual to attain immortality. And then it follows the Immortal on this quest to do that for her, her inevitable betrayal, and then his return back to his mountain. It all started with the Immortal, and I also had this idea that I wanted the villain to be a female sorceress type.

Dead Rhetoric: What was it like recording in Denmark with Jacob Hansen in comparison to doing your previous records? Do you believe you were able to try out different things and expand upon the established Unleash the Archers sound by leaving Canada?

Slayes: We definitely have a different production, that’s for sure. We knew that going in, so we wrote the album a bit heavier. There’s still going to always be those soaring vocals and sweeping guitars, the “Tonight We Ride”-esque aspect to things, but we also gave this material a deeper, darker undertone. Just because we are totally aware of Jacob’s style. We had to have everything written before we went in there, so we headed in the second we finished our European tour and we were tracking the next day. It was a little bit of a pressure situation with time but other than that it was such an incredible experience and we are so fortunate to be able to work with Jacob and have his touch on our record. We were ready to experiment before we got in there, we knew from the get go we were going to try some new stuff on this one. And Jacob was open to anything, when we said we had never done something before, he was like ‘well, alright- let’s go for it.’ He was very supportive of us stepping outside of our comfort zone and he gave us quite a few bits of advice on things. If we asked for his opinion, he would give it- so it was quite good.