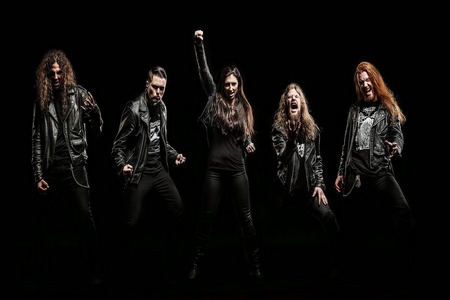 Dead Rhetoric: A significant member change took place prior to the recording of Time Stands Still as long-time guitarist/songwriter Brayden Dyczkowski left and you gained guitarist Andrew Kingsley – which also impacted a slight shift in terms of the band’s direction. Can you tell us a little bit what exactly went down, as I believe you ended up having to re-record guitars during this process which delayed the final recording, correct?

Slayes: Yes. Brayden was a founding member and a very important part of the writing process, he’s very talented and technical guitar player. When he announced to us…we had already done a few tracks and we were just planning the rest of our studio time, he sort of said to us he couldn’t afford to do this anymore. Vancouver is a very expensive city to live in and to have a hobby like a band on the side of that which is also expensive, he just couldn’t afford it anymore. He got a great offer from a real estate firm, and he needed to focus a little bit more on a realistic career. We were sad to see him go but we understood why he was doing it, all on good terms. Then it was just Scott, Grant, and I, as we had just lost Brad (Kennedy) earlier that year on bass. So we kind of looked at each other and said ‘oh man, this is going to be a really big hurdle to get over’. It was just the three of us, we only had 2 songs done and we really wanted the record to sound cohesive.

So we set out to writing and finding a new guitar player – Andrew had actually been working with Grant for a long time, (they were) friends from school and had been playing in bands together previously. We pulled him over from the island, he actually moved to Vancouver for us. He had riffs galore, ready to go- he hadn’t been in a project for a while and he was raring to record an album. It worked out so well that he had so much in his back pocket. We filtered through it all, picked out which riffs were more in the Unleash the Archers sound, and we all wrote together around everything he brought to the table. Grant had a bunch of stuff ready to go, we melded it all together and threw away the stuff we didn’t like. We basically started from scratch, and finished the recording in early 2014 – Napalm came knocking on our door, so there was a lot of back and forth there which also delayed the record. It was all worth it in the end, and I’m really excited about the new direction that we are taking. Andrew, Grant, and I are all really big fans of traditional heavy metal. I think that it’s not necessarily better than what we were doing before. I think it’s more suited to what I love to sing and what I listen to on a more personal level.

Dead Rhetoric: How did Napalm Records come into the picture – were there other labels interested in signing the band, or did you consider going the independent/self-released route again for this album?

Slayes: We had an offer from a smaller label on the table. They were waiting for the record to be done recording-wise. They were already ready to go, we were the ones stalling on that one because we were hoping for something a little bit bigger. We had a friend shop us out to a couple of other labels, and we got a little bit of feedback on that one- one other label came back willing to sign. But then Napalm… I’m not too sure exactly, we have friends on that label – both Striker and Crimson Shadows are on Napalm and they are both Canadian bands that we have played with in the past and they are buddies of ours. So we aren’t sure if they threw our name in the hat. The promoter here in Vancouver has a lot of contacts, he brings a lot of metal bands through – I know he had been recommending us to some labels. Napalm was the one that contacted us, and we were really happy to see that.

It was quite funny actually, as we all have access to the e-mail inbox. We just got a message on Facebook, and someone said, ‘has anybody seen that e-mail from Napalm in our inbox?’ Is it real? We were really excited when we got that.

Dead Rhetoric: “Tonight We Ride” is the first video from the new album Time Stands Still – and very much has a Mad Max look to it. How much fun was the shoot, anything surprising occur behind the scenes and how long did this take from filming to final product?

Slayes: It was a lot of fun. It was definitely hot in those costumes- we were in the desert in the middle of Nevada. Especially Scott who had to work really hard on his drum scenes there in the heat with his big shoulder pads on there, I think he almost passed out a couple of times, he was seeing spots. It was a really good time- it was nice of the Deathguild Thunderdome guys to let us use their cars and drive us around in circles in the middle of the desert for two days. It was all Nathan the director, he is a part of Deathguild Thunderdome which is a group from Burning Man – they were willing to let us use their stuff if we were willing to come down to Nevada. We are really lucky to be given that opportunity.

We had originally filmed it in 2013, getting ready for the 2014 release of the record. But then when we pushed it back all that time, it actually ended up correlating with the release of the Mad Max – Fury Road movie, which was just completely by chance. Maybe this is fated to happen.

Dead Rhetoric: Have you had the opportunity to see the new Mad Max film – and if so, what are your thoughts?

Slayes: Yes, I did. It was good. I think it was not quite everything I had hoped it would be, but it was definitely a visual onslaught and that’s what I really go to the movies for. I’m not a big story person, I just love explosions and the flash and bang aspects. It did what I wanted it to do.

Dead Rhetoric: Your voice is magnificent with incredible comfort in the upper register – as I understand your two favorite vocalists are Bruce Dickinson and ex-Lost Horizon vocalist Daniel Heiman. Did you have any formal training, and what is your philosophy when it comes to going full bore with the screams and note holding portions of your melodies versus keeping things grounded for the average fan to sing along with?

Slayes: Well, I never really received any formal training – I have been in choirs since I was 8 years old, when I was old enough to join in the community choirs. I received a lot of training through that, and then I went to the University of Victoria, the part of UVic School of Music and took a bunch of classes there. I was a part of the UVic chamber singers, which are award winning and an amazing group of singers. I learned a lot from the conductor, the people that surrounded me in that choir, we toured quite a bit around the world. I took a couple of lessons from one guy that I learned so much from in two lessons. Never anything really formal, or something I could say like training at Juilliard.

I try to push myself as much as possible. I listen to guys like Daniel and Bruce and hear what they do, try to emulate my best in my own vocal style. I do what feels right with the song, and sometimes I like to keep it simple. I’ll throw in some lower parts so that people can sing along, but I find that you don’t have to be a killer singer to sing along with the stuff that I do. If you want to sing along, you just go right ahead. I’ll put some ‘hey’ parts in there to get people going, get some fists in the air, usually I base it more around how I feel the song should be- a little bit more straightforward, or should I be wailing a bit more on this one. I take it as it comes, (and) I always try to push myself- especially on this latest record. I really went full bore on this, mostly because I’ve been listening to a lot of Lost Horizon. I love this stuff, but maybe on the next record I’ll go a little more Iron Maiden and just give you some party tunes to rock out to (laughs).

Dead Rhetoric: When it comes to your lyrics, do you have to wait until the music is ready to come up with certain topics or do you have many things prepared ahead of time?

Slayes: It’s a little bit of both. Sometimes I have the melodies fully concrete in my mind and I have trouble coming up with the words to fit them. And sometimes I already know what I want the song to be about, and sort of have words that I want to be in that phrase and I create the phrase around the words. A lot of times also when I’m writing I’ve got a vocal melody that I want certain words and vowel sounds, things are not going to work. I was very much into poetry when I was younger, I’ve written poetry, prose, and little stories here and there. I feel that your lyrics and what you write have to be poetic, they have to go to the music. I listen to other bands and sometimes they are trying to shove what they say into it, I don’t think that’s right. Sometimes less is more- you really have to feel, holding this note out for a long time, is the e vowel really the word you want to put in there?