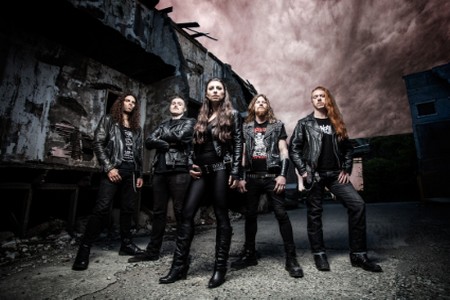 ‘We need even more tighter down picking like Lost Horizon’ is one of the more memorable closing thoughts when talking heavy metal with Unleash the Archers vocalist Brittney Slayes. Fortunately for the heavy metal community, this Canadian melodic power metal band also incorporates a lot of extreme and technical elements that help the quintet stand out. Already gaining a healthy following since their 2007 inception through their incessant touring schedule and previous self-released two full-length and EP releases, they have now signed with Napalm Records to ‘unleash’ their third album, the incredibly addictive and potent Time Stands Still.

Brittney has the pipes and ability to rival a lot of the elite in the business – male and female. The musicianship, hooks, and songwriting bring about anthems and chemistry that harkens to thoughts of Iron Maiden, Lost Horizon, Thundersteel-period Riot and others of that ilk. Given the right tools we could see another future headlining act on our hands – as I believe Unleash the Archers are in this for the long haul.

Speaking one recent afternoon through Skype, Brittney’s infectious feelings about the band and the genre at hand made this a great conversation. You will also learn more about her favorite sci-fi movies and novels, her feelings on that dreaded ‘female-fronted’ tag, as well as a lot of talk about Lost Horizon and their burgeoning Canadian metal scene.

Dead Rhetoric: You’ve settled in Vancouver, British Columbia since 2011, did you ever feel like it was harder for you to get involved in metal in comparison to the thriving scene across Montreal and Toronto in the eastern part of your country?

Brittney Slayes: Metal is definitely bigger out east – not necessarily because they embrace it more, it’s just a larger population so the scenes themselves are bigger. In Vancouver it’s definitely a little bit more tight-knit and you could even say clicky, we have our death metal scene and we have our stoner metal scene which is really popular right now. Bands like Anciients came out of that scene, and we have Archspire which came more out of the death metal scene. Being not only neither of those, and also being female-fronted, it did take us a little while to sort of find our place in the scene in Vancouver. Victoria is so small, we sort of won the crowd over right away there. Touring a lot over to Toronto, we played with a lot of really popular local bands there whenever we go over there so we were embraced very quickly as well. But again, the Montreal and Quebec scene is very death metal, and I can say most of Canada is very death metal oriented, so it took us a while to break into there. We just toured as much as we could and played as much as we could, out of sheer volume we were able to find our spot in both crowds pretty much. It took some work though.

Dead Rhetoric: Tell us about the early days of Unleash the Archers – you formed in late 2007, what were those initial rehearsal sessions like, did you discover right away the direction you wanted to go into or was it more a case of rehearsing covers and feeling each other out?

Slayes: It started actually with Brayden and (myself), in Grant’s living room just writing music together. He had a few riffs that would work, and stuff that he pulled from his old band which is where Scott and I had grabbed him from. It started as a really relaxed thing, I knew Brayden really well, we’ve been friends for a long time. When we started to find the additional members we moved onto jamming in a jam spot that was like the biggest space in Victoria, all the metal bands were there. We started meeting a lot of people and getting a feel for the scene.

It started with us all coming together with our different tastes in metal and democratically writing the songs. Brayden brought most of the riffs, we’d jam it out together and see what we liked and what we didn’t like. I was very much in that classical frame of mind from choir, it took me a while to find my voice for sure. I think after a couple of songs we found what we liked, and then we would perform live in the spring of 2008. It was the live playing, the songs that people loved and that were getting a good reaction we sort of grew with those and left the fluff behind.

Dead Rhetoric: In retrospect, how do you feel about your two albums and EP that you’ve released to date?

Slayes: I’m still very proud of them. I mean they are of course from when we were quite young, not just in age but also in terms of musicianship. Behold the Devastation was my first time in the studio ever, so it was a little bit intimidating and you can hear that in my vocals for sure. This new record I’ve definitely been a veteran of the studio and I am better at being able to take what I can do on stage and bring it out behind the microphone. Those albums had to happen in order for us to grow – very rarely do you find a band that puts out their best record as their first record. I’m still very proud of a lot of those tracks – if I could go back and re-record them all there are so many things I would do differently but that’s not the point.

Dead Rhetoric: You pulled off a rather successful crowdfunding campaign to film your second video off your last album Demons of the AstroWaste for “General of the Dark Army” – which has been viewed over 1 million times on YouTube and has an impressive storyline/cinematic quality. Where do you place the importance of the visual medium in getting across Unleash the Archers brand of power/melodic death metal?

Slayes: Very important. Without that music video, I don’t think people would really know who we were. Originally it was planned that we were going to pay for everything, but then our director said he could get these guys for us, and they own a Red camera. At the time they were using those cameras to shoot the Lord of the Rings films. We were like ‘woah – okay… that would be awesome! But how much is that going to cost?’ He said he could get a really good deal because he was friends with the guys, but he suggested the Indiegogo campaign. We were very much proud of the fact that we’ve funded everything ourselves, we never like to ask our fans for too much because they give us so much as it is. We thought it would be worth it to try- and the fans came out in spades, we would never be able to do that without the fans. And without them, we never would have gotten over one million views on YouTube.

We put a lot of importance on music videos because of that. Some bands I feel don’t think that’s an important part, a lot of indie bands don’t have music videos and they are kind of missing out on a huge part of the music scene by not having at least something up on YouTube. That’s the first place I go if someone tells me to listen to a new band. I try and find their music video, (or) their album cover shot, and a lot of times I’m listening to channels that are not the band and I want to be able to support the band. If you don’t have something up there, then I’m giving some Joe Schmo all those views. It’s probably one of the most important places to have your music, that’s for sure.

For us the video shoot took one day- we did it all in the forests of British Columbia, but for the actors they were up there for 3 days in this little valley called Squamish, it’s right by Whistler Mountain. They had some crappy weather, and it was pretty cold. I know they went through a lot for us and we really appreciated the time they spent on there. I think there was 3 days of filming by the end of the shoot.