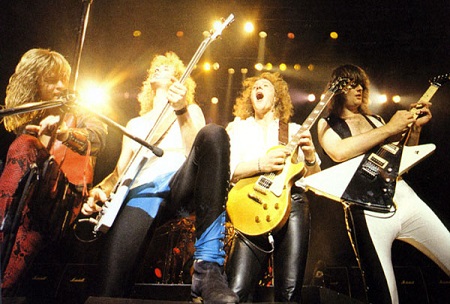 Blistering.com: When you were putting together the album, what were the writing sessions like? Were they as productive as they seem?

Kiske: Very easy. A lot of things that stuck in my mind were that it didn’t feel like work. You want things to be perfect, but have fun. The songs came very easily. Dennis [Ward, bass] did a great verse and bridge, and you can be sure Kai has a chorus. Those two worked together very well. And it didn’t take very long. Kai wasn’t afraid of pushing a song completely around – if something was not the way it could be, he just goes for it. No one in the band was afraid of that. That’s why I’m enjoying it so much. Even I have my influences here and there, and while I don’t have as many credits, my influence is there. I loved working as a band, and that’s the way it should be.

Blistering.com: In my notes, one of the things that stuck out was the title track had some resemblances to one of your Helloween songs, “Kids of the Century.”

Kiske: I never thought of that! “Unisonic” reminds me of “Jailhouse Rock” or “Blue Suede Shoes” in the verse. The chorus has a Judas Priest-like feel to it; they always had songs with a very simple chorus, but yeah, you’re the first one mentioning that, which is funny [laughs]. It was a guitar lick from Mandy [Meyer, guitars], and Kai had the chorus [Kiske sings “Uni-sonic!”] in his head for years. He was doing the vocal lines to the verse over Mandy’s part and he said let’s do the chorus…and that’s how it came together. It wasn’t even written by me.

Blistering.com: It sounds like something you would have come up with back in the Helloween days.

Kiske: [laughs] I would never do a song with a chorus like that! “Kids of the Century” is more like [Kiske hums the chorus line] and melodic. That’s how I write melodies, whereas “Unisonic” is more like [sings again] “Uni-sonic!” I would have never come up with something like that.

Blistering.com: Or maybe I enjoy “Kids of the Century” more than I’d like to admit.

Kiske: It’s funny, because I see the song in a different way. That’s the beauty of music.

Blistering.com: In terms of your growth as a vocalist, can you compare the Michael Kiske of today to the one in the late 80’s?

Kiske: I’m very different now. I have gone through so many phases of my life and I have grown up. It’s beautiful being a teenager, being blue-eyed and believing that the whole world is nothing but chocolate, which is how it was when we started. But I grew up. I have learned a lot and I think I’m a much better singer these days because I have been through so much more. I’m not really an issue of technique. A lot of singers have great technical skills and can sing high, but they don’t move you. They don’t sing with their heart or they don’t touch your heart, and I think the more you change as a person, the better you’re going to sing. It’s difficult to explain…it’s more of a spiritual thing why certain singers can tell a story and others can’t. It has to do with growing up and having some kind of professional skills. That’s the only way you’ll get better.

Blistering.com: That being said, if you had to do those Helloween albums now, would you approach them differently?

Kiske: I can’t see myself singing on those records anymore. I like the records and I like the songs, but I just want to run away when I hear it. I sound so thin…I was just a kid then. I can hear it. It’s one of those things – you can’t blame a baby for being a baby. We did what we could do in those days and the best we could. I could sing all of those a lot better than in those days, but it’s good. It shows that you learned something more and that you grew.

Blistering.com: You did some solo albums in the mid-90’s. Do you think those didn’t a get a fair shake from metal or even rock fans in general?

Kiske: That’s part of the reason why I got even more pissed. I was very disappointed with how heavy metal ended, with the last two [Helloween] records (1991’s Pink Bubbles Go Ape and 1993’s Chameleon). Even now, looking back, I understand a bit better. I was confused back then and I took things very personal. When I’m singing a song, it’s not me doing a job, it’s personal. So any criticism criticizes me as a person and I’ll take it personal, up to this day. I’m a bit more relaxed and grown-up, so I don’t pay attention to all of the crap, but I take it personal when someone criticizes something of mine.

With the way it all ended with me [in Helloween], I was very frustrated anyway. There were certain journalists who kill everything that doesn’t sound like what they’re used [to]. I learned a lot about what is right and wrong aboutculture

. I was shaping in terms of understanding, right or wrong artistically a lot better, and being able to define it a lot better in interviews. It was difficult. Everything was beautiful in the beginning; like a big party, actually. Huge satisfaction, then everything got negative. And believe it or not, I’m not some dinosaur – I started making music out of the pure passion for making music. It’s not about girls – I like girls – but it’s not why I made music. Or cars, or anything else. I wanted to do this. When everything turns negative, it eats you up inside. It takes away the joy of music, and I had years where I wouldn’t even sing a song. It shows the state I was in and it’s why it took so long for me to do something like this.

Blistering.com: So you’re saying you’ve come to terms with how things went down after Pink Bubbles Go Ape and Chameleon failed?

Kiske: There are certain things that I have not worked out yet, on a personal level. I haven’t spoken to (Helloween gutiarist) Michael Weikath at all. One day, we’ll run into each and see what happens, but that wasn’t a good thing. I understand fans better. I understand why they get frustrated. Critics should never work against creativity. Anyone creating opinions or promoting or not promoting records for the bands…people that work in that realm should have an understanding of music culture. If a band makes a weak record, that’s a different story, but if a band makes a record that sounds different than the previous one, that’s nothing negative. I don’t accept that, but I do understand why fans aren’t able to follow everything, so I’m not pissed about them anymore.