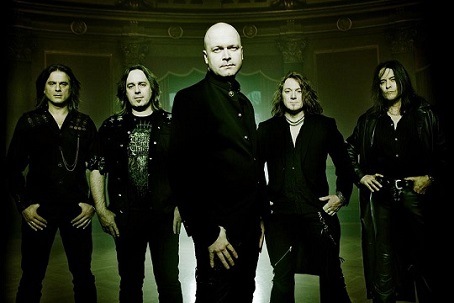 Avantasia/Edguy mainman Tobias Sammet is not only a workaholic, he’s an unintentional matchmaker. You see, for this very interview you’re about to read might not have come to fruition if Sammet didn’t bring along former Helloween vocalist Michael Kiske and Gamma Ray/ex-Helloween guitarist Kai Hansen for Avantasia’s 2010 world tour. As fate would have it, the two re-discovered the chemistry and spark whilst onstage that made Helloween the preeminent power metal band in the late 80’s, prompting Kiske to ask Hansen to join his newly formed hard rock/metal outfit Unisonic. So kudos to Sammet…someone send him a case of beer or something.

Unisonic isn’t quite the zippy, speed-riddled ensemble Keeper-era Helloween was, but it’s a towering return to form for Kiske in the metal field. With his voice perfectly seasoned and full of optimistic spunk, the singer gives songs like “Unisonic,” “I’ve Tried,” and “My Sanctuary” the treatment that only he can, perhaps re-enforcing the belief of many that he’s one of metal’s best singers. (And yes, this scribe is certainly of that opinion.) Beyond that, it sets Unisonic up for perhaps even greater metal glory down the road once album #2 is released.

There’s quite the back story surrounding Kiske’s return to metal, so Blistering was rather queued-up to speak to the affable, jovial, and forthright singer on a crisp Friday afternoon. As we quickly learned, Kiske actually doesn’t hate metal after all, and has been overwhelmed by the positive reaction Unisonic’s self-titled debut has received. Surely if Kiske could see the welcoming arms of the metal scene, he’d see they’re stretched as wide as Gumby’s…

Blistering.com: The reaction to the new album has been very positive across the board. How does that make you feel? This is your first foray back into “metal” after all…

Michael Kiske: I’ve read a number reviews and everything…it’s totally refreshing. It has entered the charts in Europe, which is totally great. For me, there’s just this great vibe going on in the band, especially between me and Kai. That’s like, really good for me. Kai, in general, is really good for me [laughs].

Blistering.com: I think Kai is good for a lot of people.

Blistering.com: When Kai was asked to join and you held the first few rehearsals, what was that like? Doing your solo stuff and Avantasia live shows is one thing, but this is something much different. Was it like time stood still?

Kiske: I think it is even cooler now. There’s even more going on now. In the late 80’s, it was a bit childish. It was still very serious [then], but it feels more mature now. To a certain extent, when you get older, things get better. The vibe between us certainly has. That’s how it started – we were on stage on the Avantasia tour after so many years and we just liked the chemistry that was going on. We’re pretty much the same when it comes to these things – we don’t make decisions with our heads, and if we do, nothing really follows. It has to be from the heart; something has to be there that excites you. That’s why we do this now. It feels so cool. That’s the secret of a band – you cannot make a band. You can get five people together that are talented and call it a band, but that doesn’t mean has this extra chemistry that makes a band what it is. In this band, we have it so far! We have a nice family…we’re better together than when we’re on our own.

Kiske: I think it got too much for him. He was scared of becoming too big. We were always good…when he was out I was pissed because of course, I didn’t want him to leave. I really liked him. I was pissed about [it]. We met after that and we talked, and he helped me out with my first solo record [1996’s Instant Clarity], and we stayed in touch through the years. We were always thinking about doing something together, but I needed a whole number of years where I could do this again. I had huge disappointments, all bad experiences connected to the ending of Helloween. Like I said, everything comes from the stomach with me. If something is not right, I can’t do it. If I’m in a bad mood, I can’t sing. If you see me fucking up live, I’m either sick or frustrated about something.

Blistering.com: I think that meshes with your personality. Per what you said about being ready to do this again, was there some type of criteria in terms of the material in ensuring it wasn’t “too heavy?”

Kiske: In the beginning, it was clear that we’d be a rock band, let’s not make too much metal. But now, I’ve connected with the fans in the metal scene and discovering how sweet they really are.

Blistering.com: We are sweet, yes [laughs].

Kiske: Everything that came from them was so beautiful and now that Kai is in the band, we’re metal anyway. Right now, I don’t mind. If it’s metal, then I’m okay with it. I like Kai’s metal.

Blistering.com: Kai’s metal is pretty much your metal, if you think about it.

Blistering.com: Plus, the two Keeper of the Seven Keys albums you did with Kai will always be revered.

Kiske: We never had the evil, Satanic crap going on. We always were funny, having a sense of humor, or positive. I was singing the last few days (Helloween songs) “I’m Alive” and “March of Time,” getting ready for the tour and I was going through the lyrics again, and they’re so positive! Nothing negative.

Blistering.com: Your era of Helloween, specifically both Keeper albums are renowned for their positivity, so again, that meshes with your personality.

Kiske: Exactly. I’m an idealist. I believe in the good things in life. I believe in humanity and I know there are a lot of bad things going on, but I’m always meeting beautiful people with big hearts and I love that. That’s probably why these records linger on – the younger generation gets a kick out of it because it has an uplifting vibe. I think music that brings people down is a crime. I’m not talking about metal music all the time – you can be aggressive or whatever, and if you express it in a good way or express anger in a constructive way, that’s a different story. A lot of things that are coming out now are bleak or down, and I really think that’s a crime.