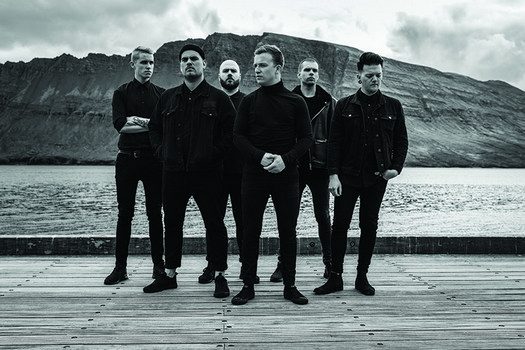 It’s always impressive to see a young act get quickly scooped up by some of the larger metal labels in the scene. There’s a bit of surprise, but there’s quite often a reason why they are rapidly signed. In the case of Icelandic act Une Misère, it must partly be due to the band’s ability to blur aggressiveness and sorrow. For a fresh band, they have already developed a vibe that pulls you in with its riffage, but keeps you around due to the emotive impact they are able to generate. With their debut, Sermon, just around the corner, we grabbed vocalist Jón Már Ásbjörnsson to get a better appreciation for the band’s sound, (negative) inspiration from their homeland, and that connection between musical and emotional heaviness.

Dead Rhetoric: You all came from other bands previously, how did your experiences shape the way that you wanted Une Misère to perform?

Jón Már Ásbjörnsson: It’s less about what we wanted to do, and more about what we didn’t want to do. We came from these bands – of course when you start a band and you are in it, you want to ‘make it.’ But when we started this band, we realized that had made a lot of mistakes in the past with our other bands, so we knew what not to do. We’ve steered clear of that – we’ve brought only the right things from our previous bands into this one.

Dead Rhetoric: How do you describe Une Misère’s sound? It’s hard to come up with one of those quick and easy labels for it.

Ásbjörnsson: I wish I could help you out there [laughs]…I don’t have one either. I’ve been wondering the same thing for the last three years. We are aggressive, but we are also emotional. We are everywhere I guess. At one festival this last summer, we were described as post-black, and nothing more. We’ve also been labeled blackened hardcore and post-blackened hardcore, and whatever. People feel what they want to feel. We aren’t trying to pin ourselves down to a single genre. We like the music that we play, and if we don’t like it, we don’t play it.

Dead Rhetoric: Could you discuss the concept of the title Sermon in regards to the band’s overall message?

Ásbjörnsson: The title Sermon kind of comes from the idea of a sermon but without the religious aspect. It’s more of a celebration of our atmosphere and our theme, which is the misery of life, basically. The sermon title is that this album is a celebration of misery. Everyone feels bad, everyone is miserable at some point. Why diminish it? Why focus only on the happy side of life? Why only view life through the Instagram lens. Take into consideration that 9/10 people have 5 awful days in a week. You never see that. This album is our calling to people – you are not alone. Let yourself feel miserable. It’s beautiful in a way, to live a life that is that stormy, that you feel such an intense feeling. It’s better to be miserable than to be numb.

Dead Rhetoric: Is there a connection between musical heaviness and emotional heaviness on the album?

Ásbjörnsson: Definitely. When we realized that we might have something, that was when we started the band. We all made that instant connection to what we were writing. All of the lyrics that I write are based on me: what I have gone through, and what I am going through. Whether it’s alcoholism or addiction, or mental illness or veganism. It is coming from a very real place. The music that the guys and myself are writing – it’s not just us picking up a guitar and going, “Hey, you guys want to hear a cool riff?” That’s not the meaning of the riff. Whether it’s cool or not, that’s completely on the side of the matter.

If we don’t feel something when we write these songs and riffs, they kind of don’t matter. I want to be listening to every riff on an album, and I want to be able to press pause and really think about ‘holy shit, what’s going on? This is life, and so forth.’ That’s kind of how personal and I want to say how honest this album is. The heaviness is both in the music and the emotions. I think that’s just the end result of honesty.

Dead Rhetoric: This is your first full-length – how did the deal with Nuclear Blast come about?

Ásbjörnsson: We signed with Nuclear Blast through the work of our manager – they are the smartest guy in the world, and one of the most driven people I’ve ever met: Simon Füllemann. We were going to sign with a different label here in Europe, which we were all excited about, and had some cool bands. But Simon said, “Nah, let’s go bigger!’ To us, it was a bit of a joke, because we had nothing. We only had a 3-song mixtape out. For us to go bigger, we didn’t quite believe in it. But he got us an offer from Nuclear Blast, and we were just blown away. This is a label that has carried and has had on it’s roster, some of the most important bands in rock ‘n roll history. For us to be on that roster, it’s humbling, and it’s very amazing – I’m not quite believing it yet…it’s something, it really is.

Dead Rhetoric: Can you talk about the inspiration for doing the Iceland: Beauty in Misery video documentary?

Ásbjörnsson: That was an idea from the Nuclear Blast side. Through our conversations on the topic, they quickly realized that there was more to Iceland than just beautiful waterfalls, Northern Lights, and of the gorgeous scenery. I guess you could call us jaded by this country, but we’ve been here for over 20 years and sure, it’s very special – the Northern Lights and waterfalls to the outside world. But your neighborhood doesn’t seem that special to you does it?

To us it’s just our neighborhood. I’ve seen the Northern Lights for countless nights every winter since I was born. I’m not saying that you should become that pessimist to those things, but it kind of happens, and you focus on the shittier side of things in Iceland. I guess Nuclear Blast thought that was an interesting take. I guess they don’t hear that much of that take, since Iceland is one of the most sought after countries for tourism these days. So they brought up the idea of the documentary focusing on the darkness, isolation, and not getting anywhere. It turned out really good, and I’m very happy that they did it.

Dead Rhetoric: It is interesting – when you are there in one place all the time, sure it’s nice to visit somewhere but it’s something else to live there every day of your life. You do get used to the things around you – I know I never thought about that piece before I started watching some of the documentary myself. It’s an interesting idea that you could apply to other parts of the world as well.

Ásbjörnsson: Yeah, you could do it anywhere. It’s kind of a double-edged sword, because you start to think that you should go back and re-appreciate your surroundings and reevaluate what is beautiful around you. I’m at that point in my life in this country that I kind of can’t get past the bad things. The darkness – the miserable things. It’s constantly there. This country, I think I may have drained it’s joy.

Dead Rhetoric: Could you talk about your own experience with drugs and alcohol and how the band has helped with this problem?

Ásbjörnsson: First and foremost, the guys like me better when I’m sober [laughs]. Just to be able to have that privilege and standing on stage and telling people that drugs and alcohol fucked things up for me, it enforces my sobriety. It keeps me clean. To be able to get rid of those feelings every night on stage, it’s super cathartic.

There’s no pressure within this scene of having a beer. I’ve found that quite amazing, as we have toured and played festivals, there are no surprises when I am drinking a non-alcoholic beer when we are at a festival site at 3AM. Or if I ask someone from another band if they could get me a non-alcoholic beer – it’s “yeah, no problem. If they don’t have it, do you want a soda?” That’s it. Everywhere else, especially within the Icelandic scene, it’s drugs and alcohol everywhere. So I’m quite thankful for the band, and the scene/genre. It’s still very welcome towards sober people. Let’s thank Minor Threat for that!

Dead Rhetoric: I wanted to jump back to the darkness we were talking about. Does being in the band and being able to express those feelings, as you were saying in terms of draining the beauty, does it help get some sort of catharsis?

Ásbjörnsson: Oh yeah – I don’t know how to explain it, but that fact that this country makes me feel like shit really helps with the lyrics. I guess that’s one way of saying it. When you wake up in total darkness and you go to work in the dark, and you finish work and it’s dark again you don’t experience the total light of day. You go to sleep in total darkness – it can really fuck with your head. And it has, throughout the years, fucked with my head. It truly does help me in the writing of lyrics and the living out of the atmosphere, and getting carried away by releasing the shittiness into lyrics/ideas and watch them take shape. Then they are gone from me forever. They are not mine anymore. That’s kind of nice.

Dead Rhetoric: What are some of the goals that you have for the band moving forward?

Ásbjörnsson: I want to tour Japan [laughs]. The fact that I am already in a touring band is quite astounding to me, and the guys would probably all stay the same. We just want to play everywhere, and keep making music for anyone who wants to hear it…and yeah, I want to tour Japan!

Dead Rhetoric: Any reason for Japan in particular?

Ásbjörnsson: It’s just so far away. I know that Australia is further, as is Brazil, but culturally it is so far away. I have never been close to Japan. I have always wanted to go. I love the culture, I love the films. I love the food, I love everything about it. But it’s still so far away. In my mind, it’s the furthest I can get from my usual life. So I want to check it out. I have also been watching a lot of Hate5six videos over the last few months where he has gone there with Jesus Piece and other bands, and those people are fucking crazy when it comes to shows! Holy shit! They get off. I want to experience that.

Dead Rhetoric: You mentioned this a little bit, but what is the Iceland metal scene like, compared to touring elsewhere?

Ásbjörnsson: It’s a lot of beer. The Iceland metal scene – we help each other out a lot. We really want everyone to succeed: everyone that is not an asshole, a dick, an abuser, or whatever. We really want the other bands to succeed, and they want us to succeed. Everyone is helping each other out, and it’s really beautiful. But I still have yet to see the difference between the Icelandic scene and the foreign scene. There is more moshing, and then there is less…I don’t know. It really differs from night to night I guess.

Dead Rhetoric: What does the band have planned as we go into 2020?

Ásbjörnsson: We are going on tour with Darkest Hour in January. Then I can’t say anything, I’m so sorry. But there’s a lot on the agenda, and be ready to be surprised.