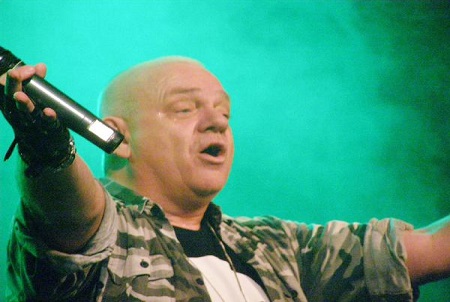 It seems like many of our hard rock and metal icons are unfortunately passing on (Ronnie James Dio) or retiring from the scene (Scorpions, Judas Priest). Yet one artist who seems to be continuing on at a regular clip would be Germany’s pint-sized vocal powerhouse Udo Dirkschneider. Whether singing for Accept through the 70’s and 80’s (plus a partial reunion in the mid 90’s and 00’s) or through his own 13 U.D.O. albums that started in 1988 with Animal House and continue this year with his latest, Rev-Raptor, it’s certain the man lives and breathes for the cause.

The last time I witnessed U.D.O. on American shores was 2001, where I was lucky enough to take in two separate tours as a headliner and opening act-, slicing and dicing the crowd with his traditional roar, twin-guitar riffs and a rock-solid rhythm section splitting up the Accept classics and his own strong band material. There are so many aspects that he brought to the table in his 35 year-plus career beyond his unique voice and combat fatigue stage attire, and Udo never shied away from incorporating ballads and left field tracks to diversify his studio work.

Talking to us during the summer European festival season, Udo speaks with the clarity and conviction of a musician who knows how to please the fans.

Blistering.com: First off, are Stefan’s [Kaufman] back injuries resolved enough for him to continue full time with U.D.O.? I know that this caused a 5-6 month delay in the release of your latest album Rev-Raptor.

Udo Dirkschneider: Yes, he’s totally recovered and there is no problem anymore. He’s fine, we have been doing shows together and he feels okay.

Blistering.com: You have a very productive work ethic with U.D.O. – new albums appear regularly on the market every 18-24 months as you tour the globe. Do you feel just as creative and inspired today as you did when you started in metal 35 plus years ago?

Dirkschneider: Let’s say in a way we are very creative. We are not always feeling like we are in between, to say that we have to write a new album and sit down to write new songs. We are always working on songs; actually we have some ideas lyric-wise, melodies, and music wise for the next album. We are continually working on new songs, and when it comes to making a new album we already have a lot of ideas. It’s a good way for us to work.

Blistering.com: How would you compare Rev-Raptor to most of the catalog through the years? It appears to me to be another great cross-section of faster, pumping traditional songs, some mid-tempo anthems and the classic ballads you offer.

Dirkschneider: About Rev-Raptor, the range of songs are a little different thanDominator and Mastercutor. For me it’s closer in comparison to the Holy album or Faceless World. We have a lot of different things on here- more melodies, more twin guitar harmonies. We always try to do something different. We still continue with our roots music-wise, sound-wise I believe it’s a bit more modern sounding.

Blistering.com: Did it also help to have additional songwriting contributions outside of yourself and Stefan on this record?

Dirkschneider: Yes, of course. Stefan and I are the two main songwriters. But Fitty the bass player contributed two songs to the album, the main writer for the title track and “I Give As Good As I Get,” and Igor the other guitar player contributed to “Fairy Tales of Victory” and “Pain Man” and our drummer does more with the arranging. It’s like a band together and I think that’s very important.

Blistering.com: There will be bonus material on the digi-pack as well as the overseas releases. We know this is a direct result of the download phenomenon – does it worry you though how your fans have to purchase multiple versions of the same product to get all of these tracks?

Dirkschneider: Yes, it’s very difficult. This is something that the record companies like to do. Why can’t you put out two versions – one with a bonus CD and the other the regular version maybe with video tracks? I think we have out at the moment five versions of this album, and that’s a bit too much. But what can you do? The record companies have to do this. Normally in the old days you come up with 11 or 12 songs, and now you have to record 16 songs so each territory has their own bonus track. For us the bonus tracks are not bad songs – so which song do you want to give away for the bonus? That’s what makes us not so happy for this.

Blistering.com: How did it feel going to South America for the first time in your career? Any special takeaway moments from that tour?

Dirkschneider: In Mexico that was not the first time for U.D.O. but for us to play in Peru, Chile and Argentina that was our first time. It worked out perfectly for us; we will be going back very quickly in May of 2012 to South America. It’s a very great market for metal now, the tour was very successful for U.D.O. and what can I say?