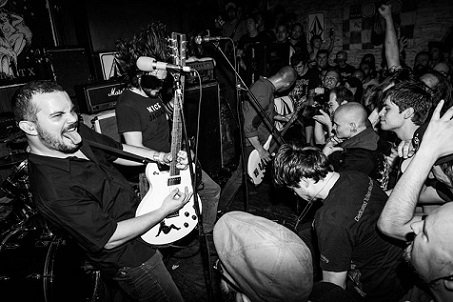 Apparently, there’s an ongoing argument whether Torche is an actual metal band or not. Various Internet message board lifers have had a field day debating the merits of the band’s totally heavy, but totally poppy sound, with the end result being where we are today – Torche simply defies convention. Even us always-ready-to-tag-a-band-because-we-can metal journalists can’t seem to do it properly, and it’s why Torche is one of the scene’s most intriguing figures. (And for the record, Blistering suggests the “fun metal” tag since main dude Steve Brooks is always smiling.)

The band’s new Harmonicraft (Volcom Entertainment) shoves some very heavy boulders and pre-conceptions of the band out of the way. Those expecting a dense, startlingly-heavy album in the form of 2008’s breakout Meanderthal might do a few double-takes when the eccentric “Letting Go,” “Kicking,” “Snakes Are Charmed” and “Sky Trials” come careering down in pop-rock fashion; especially “Kicking,” which could be one of the more yippy-skippy songs we’ve come across of late. It also helps it rocks pretty hard; as does the rest of the album in a sort of bottom-heavy, Sabbath-on-pop way.

In a quasi stroke of crazy good luck/bad personal hygiene timing, new guitarist Andrew Elstner (Riddle of Steel, Tilt) had the misfortune of having a bat pee in his eye, which gave Torche publicity in ways they’d never imagine. Elstner has since recovered (read about it here), and perhaps as an even greater feat, fully assumed the second guitar mantle once held down by the imposing Juan Montoya. And as it would go, the affable guitarist was kind enough to phone Blistering from his Atlanta homebase to discuss all-things Torche and bat pee. Read on…

Blistering.com: How much mileage do you think you’ll get out of the story of the bat urinating in your eye?

Andrew Elstner: [laughs] It’s still going! It has slowed down after the story got out after people were like, “Oh, cool…a bat peed in his eye.” I mean, as new people find out about it, I’m still getting emails and questions about it. The timing was awesome. My St. Louis band put a record out the same month, then there’s the new Torche, so the timing was bizarre. A few close [friends] thought I had done this on purpose.

Blistering.com: Who cooks up a story about a bat urinating in one’s eye?

Elstner: Exactly. If I could come up with one, it would have been a lot more creative-sounding.

Blistering.com: It’s funny because a co-worker sent me the story asking if I knew of you guys, and now just because of that, she knows who you are.

Elstner: For a minute, I get down on it in a weird way, but there were pictures with a lot of the stories, but the weirdest part is that somebody through somebody and somebody else got all of the pictures and information of me. My Facebook was set up pretty private. I mean, I don’t care because that stuff helps the band, but I was wondering how all the information and photographs I posted will lead to people staring at me, like, “There’s the bat pee guy.”

Blistering.com: That could happen. You could be walking down the street and someone will go, “There’s the bat pee guy!”

Elstner: That would be funny [laughs].

Blistering.com: Has anyone tried to come up with a shirt-design?

Elstner: Yeah, actually. It was the Batman logo with the fangs of Batman on it. Originally, they were going to stick my face on it, but now it’s the old-school Batman logo and in its place, it says “Torche” and the Batman guy has pee in his right eye. At the time it seemed really hilarious, but if we did it any more for when we go on tour, I don’t know if anyone would give a shit by then. It’s still a cool logo, even without the bat pee in the guy’s eye.

Blistering.com: Maybe you’ll end up on one of those VH1 countdowns, like “The 100 Most Crazy Stories in Rock” or something like that.

Elstner: That would be amazing!

Blistering.com: Anyway, you’ve been in the band for a little over a year now, so are you still getting “new guy” treatment?

Elstner: Not from the band at all. We warmed up to each other pretty quickly and they’re all legit guys. I wouldn’t be hanging around them if they weren’t and I’m sure they wouldn’t be hanging around me if I was a dickhead. It’s been a blast. You can tell with home audiences that everyone is welcoming, but I wonder sometimes…not if people think I’m a dick or I suck as the new guy with people that have seen the band 100 times before and I’m the skinny white dude.

Blistering.com: During your time with Riddle of Steel or Tilt, did you know the Torche guys?

Elstner: Only peripherally. Riddle of Steel, our second record, the vinyl version came out on Robotic Empire during the same cycle as Torche’s first record. Through that, I knew who they were. I think when I first met them, I was on tour with a friend’s band in St. Louis and we caught them a lot and it was fucking awesome. I had never seen them in person and so after that, I ran into Steve and he said, “I saw your band when you played in Florida, it was awesome.” That’s when I first met them, and after Riddle of Steel’s first record came out, I gave them a copy.

The next time I saw them was around South by Southwest time four years ago, and ran into Steve the following December and he asked, “What’s going on with the band?” Saw their show, the show was good, and three weeks after that, they split with Juan…the blow-up, handshake and farewell. Then through Myspace, I think [laughs], he sent me a message asking what was going on. We kept in touch for two years, I guess. There was a lot of hit-and-miss, and when finally got together, it worked out.

Blistering.com: Harmonicraft is your first album with the band, so as a unit, what was the approach? It has some elements of Meanderthal, but it adds a lot of new twists too.

Elstner: I know as a huge fan of Torche, you want to dump in all of the stuff that’s like throwing red meat to wolves…you want to do bomb strings on every song. Those guys being a band for as long as they have, you want to try new stuff. In their own minds, they were ready to try some fresh things. I don’t think there are any total curveballs on the record like, “Holy shit, they did a rap metal song!” It was never a conscious, outspoken thing, like we’re doing this or we’re not going to write an album like this. I think even having someone new in the band, freed up a vibe. Does that make sense?

Blistering.com: I would think, definitely.

Elstner: It gives license to try ideas that you couldn’t try in the past or things that didn’t work as well. It was definitely open and easy. Those guys are extremely easy to work with; they work extremely hard and extremely fast. If it’s not working, it’s not working. It’s really efficient, I guess.

Blistering.com: “Kicking” gets stuck in my head constantly, so I think you succeeded there.

Elstner: Oh, rad! That song was the first we wrote together. I met them in Gainesville, went back to their practice space and I had learned all of their old material, but they were like, “We’re not going to do any of that. Do you have any songs you’ve been working on?” I had some riffs and other little bits. I kinda had something, but I didn’t want to feel like an idiot, so I shat [the first riff on “Kicking”] out and they thought it was neat. I’ve been lucky with musicians I’ve played with…within 30 seconds, [Joe] Nunez had the bass-line down, which was just awesome. And then Steve comes with a heavy riff and we spat it out in 20 minutes [laughs]. It remained as-is from that point on. People seemed to pretty stoked about that song, so it’s a good feeling knowing I was able to kick the album off like that.

Blistering.com: I’ve been in bands before and we call that “Pulling a riff out of your ass.” Aside from “Kicking” and “Letting Go,” there are some metal moments like on “Reverse Inverted.” Do you have any preference between the heavier and poppier stuff?

Elstner: It doesn’t matter to me. It’s not a particular sound for me, and it works so well for me, that it’s hard to explain. It’s not like I was some bizarro fan of Torche…I didn’t get into them until after Meanderthal and it was until I saw them live that it really clicked. I grew up in a musical family; everyone played something in way or the other. Music was always around, but I grew up listening to metal from 6th grade one with hard rock and metal. It makes sense to me…playing heavy, loud guitar is satisfying. It makes it even more awesome if you can combine it with something memorable. I’m doing a really horrible job of describing this [laughs]. It’s tricky to come up with something that sounds cool without being corny and overwrought.

Blistering.com: It’s very tough in metal because all of the riffs have been used and you can’t do anything without someone saying it sounds like someone else.

Elstner: Everybody in the band is a fan of popular stuff. If it’s not power-pop, it’s something in the indie rock world. It was more a surprise to me that so many people were surprised we covered Guided By Voices. To me, I can hear it already. The melodic stuff, I’d ask Steve what he’s listening to…where there’s a drone underneath and major melody on top, so it transcends a lot of styles.

Blistering.com: What was it like working with Kurt Ballou from Converge? He seems to do a pretty good job with a wide variety of bands.

Elstner: He was awesome. I hadn’t met in him person, but if I did, I’m sorry Kurt [laughs]. We tracked the record in Miami, so John was the engineer and our friend

Brian Hass was the co-engineer. We sent the tracks up to Kurt and he has an awesome team around him with guys who aren’t judgment and Kurt is a total machine. He grinds out mixes so fast and he’s very responsive to the ideas we had.

Blistering.com: There’s been an ongoing debate on which side of the fence Torche is, if you’re metal or not. What’s your take on the matter?

Elstner: The guys in the band, I don’t want to speak for them – they would say we’re not a metal band, we’re a rock band. I don’t take that route, I think if people want to think that, that’s fine. When I grew up, my first guitar riffs were Aerosmith and Led Zeppelin, then you hear Metallica, Anthrax, Slayer and whatever else. I still…I don’t know [laughs]. The bigger bummer is when people go, “You aren’t a metal band” and they’re pissed about it. Like what you like, but if people are bummed…especially with the new record since we didn’t write the first album all over again, people would say we were treading water if wedid re-write the first album. If we tried something different, they would say the new shit sucks. You can’t please everybody, so you might as well please yourself.