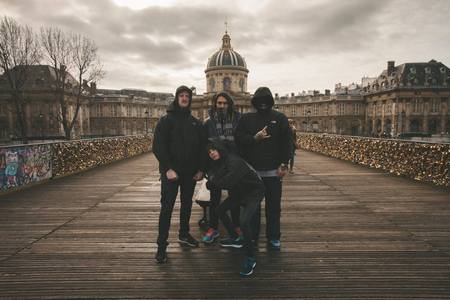 Dead Rhetoric: You’ve moved up the ranks somewhat quickly, which always brings the naysayers to the forefront. Anything in Holy War that might persuade someone to check you out?

Marsh: I don’t really care. We don’t like to attract negative people. If they think that we are at the top, then they are wrong. If they think that our rise to the top has been quick, then they are also wrong. I say this pretty confidently – we are one of the hardest touring bands that I’ve ever heard of. We did over 400 shows on the Hate cycle. Last year we toured for 10 months, with 8 months back to back, without even going home. I feel that whatever we do have coming to us, we have earned our place and done what we can, and worked hard. But if people want to come and have a good time and see some heavy music, with 5 guys that are really working for it, come on down. The new record, I think it’s pretty special. We put a lot of time and effort into it, and if people would like to come and check it out, that’s great. If they want to burn us on the Internet, that’s also great.

Dead Rhetoric: We touched on this earlier, but the lyrics of Thy Art is Murder are usually grounded in reality. Do you feel the real world is scarier than fiction?

Marsh: Absolutely. That’s the whole mantra of our lyrical concept. In death metal and power metal, lyrics are traditionally more based on fantasy. We tried to distance ourselves from that. We got together before we did Hate, and Sean [Delander] and I had been listening to a lot of hardcore that had been coming out at the time, and we felt there was an extra level of heaviness that wasn’t coming from the music. It was coming from the mood and the lyrics. The lyrics were talking about real issues and personal issues, and that adds another layer of emotional impact for the listener. I can’t relate to singing about some serial killer from 200 years ago. It’s not relevant to my life. But what is relevant is that religious people are fucking a lot up, politicians are fucking a lot up, we are fucking around with animals a whole bunch, and global warming is a very real issue.

Those things personally affect me, they affect you, and they personally affect every one of our listeners. It’s a very deliberate thing to try and affect the person that is listening to our music. Not to have it just be a cool time and a heavy record. When they read the lyrics or listen to the record, they get an extra layer of impact. I’m glad at least, and I hope that it’s at least working and people are appreciating it.

Dead Rhetoric: You are on the Mayhem Festival this summer. What are you looking forward to the most?

Marsh: Generally before tour is the hardest that I have to work every year. I’m the guy that does everything in the band. Building, fixing, organizing, and I manage the band as well. We also have a record coming out the same weekend the festival starts. It’s an immense workload, but once we start the fest, there’s no more set-up for the album or tour, and I get to have a fun time in the sun and have a barbeque every day and see some sick bands. Whitechapel – we’ve been waiting to tour with them for years. We are really looking forward to it, they are cool guys and good friends of ours. And who doesn’t want to tour with Slayer? And it’s a festival so we can’t have people booing us and saying, “SLAYER!” So there’s that. It takes the pressure off. I’ve heard that pretty much every band that opens for Slayer gets booed so now we get to do it without that.

Dead Rhetoric: Any songs from Holy War that you are looking to play live?

Marsh: All of them! I’m actually just setting up the backline upstairs in the studio to start rehearsing. We are all very excited. The last tour we did, we started rehearsing “Light Bearer” and “Holy War” at sound check. It feels really good to play the songs live, they are a lot of fun to play live. We’ve been touring off Hate now for 2.5-3 years now so it’s good to get fresh material in there. It’s re-invigorated everyone. We are all excited to try to up our game and play the best that we can and add new elements to the live stage show. So we’ll definitely play those two tracks and maybe we might try to toss in “Absolute Genocide” and “Coffin Dragger,” which is in my opinion, the circle pit anthem of the year, but don’t hold me to that one [laughs].

Dead Rhetoric: So what’s next for the band following Mayhem Fest?

Marsh: We’ll be going over to Europe and the UK for about two weeks just to give that territory a bit of an experience and taste of the Holy War record. It’s important to go and play everywhere when your record comes out. You want everyone to see the live representation of it while it’s fresh. Unfortunately we can’t do an extensive tour there because we are capped by a radius clause for another tour we are doing in Europe early next year which I can’t get into. Then we’ve got about 5 tours lined up that aren’t announced yet. So we’ll be working hard for the rest of this year until about this time next year.