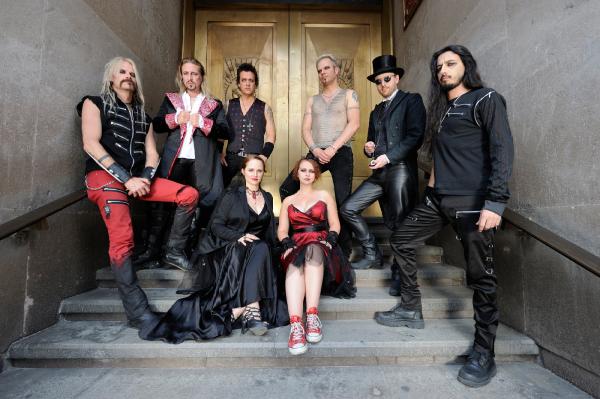 On a brisk Saturday afternoon (at least at Blistering HQ), Therion mainman Christofer Johnsson was phoned while packing for a tour. The sound of zippers zipping, cases being shut, and gear being tossed about echoed in the background as a jovial Johnsson was clearly in the mood for a hearty chat, something we’re always down for as well. Reason being, the band’s newestSitra Ahra is another masterful slab of grandiose, orchestrated metal, even as Johnsson jostled with a seismic lineup change, specifically the surprising departure of the Niemann brothers (Kristian, guitars; Johan, bass), both of whom provided stability to the Therion ranks for close to a decade. In addition, touring backing vocalist Snowy Shaw wrestled with a spot in Dimmu Borgir, at first leaving Therion, then joining Dimmu, then leaving Dimmu, then re-joining Therion. Compounded with the acquisition of former Candlemass singer Thomas Vikstrom (he of the poorly-received Chapter VI era of CMass), and it’s a surprise Johnsson still has his wits about him.

The band’s stellar back catalog is no secret to anyone in the underground, yet the Swedes remain a lost commodity on North American shores. The touring cycle for 2007’s Gothic Kabbalah produced two North American runs, neither of which were very successful, prompting Johnsson to rule out the band ever touring here again. Hard to find fault with that approach – the economics of putting on a full-scale live show, paying the crew, backing vocalists, travel, etc. kills the bottom line, and if there’s one thing that was apparent during our chat with Johnsson, it’s that the bottom line reigns supreme in the land of Therion. We’ll let Johnsson take it from there…

Blistering.com: Sitra Ahra is your 14th album, so does the process get any easier or harder when compared to when you were starting out?

Christofer Johnsson: I remember back in those days we had our bass player answering the fan mail and it was piling, so I would see the stack and go, “Fuck, this is after six months?” Then our guitar player at the time took over and he couldn’t handle it either, and our budget for those records was only something like $700, but someone in the band had to help pay. The drummer is the one who always has the cash. That’s the just the natural way things end up. But it’s a little more streamlined now, as long as we have budget.

Blistering.com: Obviously, Thomas Vikstrom is your first full-time vocalist in eons, so what made him the right choice? When he was in Candlemass, Chapter VI wasn’t exactly very well-received.

Johnsson: Yeah, I didn’t like Chapter VI either [laughs]. I thought he did a good job on it; wasn’t his fault. I knew who he was, though, and our drummer came up one day and said Thomas could be interested. He only listened to one song out of entire catalog, but we found each other immediately. He’s a theater monkey. He doesn’t have the typical lead singer ego, which is always a plus.

Blistering.com: Anything different in the writing process for Sitra Ahra? It seems like with every album something new comes up for you.

Johnsson: I just write. I have no idea where things are headed. This was record was different because I had enough material for three albums, but I woke up one day and decided to save some songs. On occasion we’ve recorded leftovers from previous albums, which for most bands, is a bonus. This is unique. Take Maiden – they never would have released the material written around Powerslave or Somewhere In Time 10 years later. The band had evolved too much by then. For Therion, it’s simply a matter of learning about new instruments.

For every album, you’ll get the typical whines which is classic. Like for Deggial, I read the forums and it’s the new favorite album. Secret of the Ruins sold less than Vovin and everyone considered it to be a flop, yet now it’s considered to be the best. I’ve read so many embarrassing pages, so much shit, and positive reviews from people that proves they just don’t get it. Some fuck wrote about how we’ve reunited and Gothic Kabbalah was our final album. People think they know me, but they don’t know simple music from complex music. Everyone is on their high horses these days.

Blistering.com: Because of the Internet?

Johnsson: Yeah, because of the Internet. It’s amazing what people write.