The Unguided – Moving Past Syndication 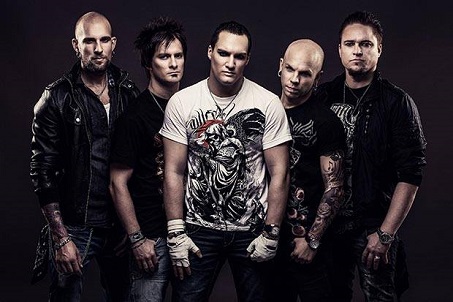 Sonic Syndicate was a band that I heavily followed from the time they released their first demo as Fallen Angel, through what was arguably their pinnacle, Love and Other Disasters.  The band then took a major swerve towards the mainstream with the follow-up, We Rule the Night.  Tensions grew within the band, causing brothers Richard and Roger Sjunnesson to exit the band to form The Unguided, along with former clean vocalist Roland Johansson (who left before the recording of We Rule the Night).

Hoping to re-capture the “metal” side missing from their former band’s most recent output, they wrote their first album, Hell Frost, soon there after.  Released in 2011, the band took the next three years to craft their most current offering, Fragile Immortality.  While still maintaining the band’s signature sound, Fragile Immortality feels a bit more adventurous, seeing the band shift towards heavier metallic ends as well as melodic endeavors.

With the release of Fragile Immortality on the horizon, DR reached out to vocalist Richard Sjunnesson to catch up with the band.  With topics ranging from the disintegration of Sonic Syndicate and subsequent bad blood, Hansi Kursch’s guest vocals on “Deathwalker”, and Kuang Hong’s artwork, read on to see Richard’s open and honest responses.

Dead Rhetoric: Going back in time to Sonic Syndicate, what happened internally that caused so much distress in the time after Love and Other Disasters?

Richard Sjunnesson: There were a lot of things going on in the band during the time after LAOD really. We had Roland leaving due to the heavy touring, the communication in the band was getting worse and worse, and small problems slowly turned to huge ones. There was a growing gap between certain members, voids that definitely didn’t heal with a new member in the band; rather the opposite. Also, the greed of the manager and external organizations were getting out of control. Putting money before people’s well being while the commercialization of the band was in full force, just to reach out to a younger audience.

I remember the We Rule the Night session with a lot of negativity, where everyday was a constant battle against what you thought was right versus what you were being asked to do. My brother and I decided during the recording of the album that we would leave the band, since this was not what we intended for the band when we formed in back in 2002 and that’s what happened.

Dead Rhetoric: I decided to give sonicsyndicate.com a spin to look at some of “old” discography information only to find it links to The Unguided homepage.  Were you guys aware of this or was it something someone else did to give you a bit more exposure at the old band’s expense?

Sjunnesson: Well, it was pointed at their new address sonicsyndicate.net for the longest time, but just recently there’s been some unnecessary friction regarding me using some titles and lyrical references in The Unguided from my old work in Sonic Syndicate (obviously I’m only using references from the titles and lyrics I’ve done 100% myself, which is the three first albums of Sonic Syndicate). This level of childish behavior is unacceptable, and just took this whole mess to a new low. Seeing how I own the domain sonicsyndicate.com and always have, I saw no reason in being nice and pointed it to where it would be most benefiting for myself, meaning: theunguided.com. I’d be happy to change it back, if they would show a more adult mentality regarding that matter. In the end, you always get what you give.

Dead Rhetoric: I’ve heard that you can’t play any of the old Sonic Syndicate songs live.  While I’m sure there are plenty of people bummed out by this, looking back, do you feel it helped you out as a band going forward, being able to completely leave that material behind?

Sjunnesson: It’s nothing we really consider doing nowadays, of course it would be cool to be able to belt out some old tracks as a nostalgic feature to our live show or something, and obviously the fans would love that as well; hearing the songs with the original vocal duo. But at this point we are not even looking into it. Once upon a time we honored an old contract that was written when Roland left the band. But now we know better and have examined that contract in more present time, it’s so flawed that it’s highly unlikely that it even has any coverage at all. So basically what is hindering us from doing that is rather a policy in the band than that legal issue. We are putting out our second record now, and we have plenty of songs to choose from for our live sets and it’s completely The Unguided material. That’s a nice feeling indeed. But even if we would have played the old material in our live shows, I still think we would have been at the same point as we are now in our career.

Dead Rhetoric: Was there a certain level of pressure to deliver the goods with Hell Frost after the split with Sonic Syndicate?  Do you feel that there was more or less pressure to follow up with Fragile Immortality?

Sjunnesson: Hell Frost was a bit more stressed and we played it bit too safe there. There was a certain need to have that album done quickly, since we really needed that platform to stand on as a band. A lot of the songs on Hell Frost were written from the same formula, which was basically what people expected of us. We didn’t want to disappoint and we didn’t want to stray too far from what the fans were used to; taking in the consideration to satisfy our own creative needs as well of course, but yeah, we tried to balance it out as neatly as possible. So there are definitely elements there that never saw the light of day in a Sonic Syndicate song but still enough similarities to make the old fan feel at home.

This new one however; there was still pressure obviously, since we aimed for a bigger label and a bigger leap in our career, but there was so much more room for improvisation. Fact is, it’s really an experimental album where we took the curve wide. And we really took our time with it! I’ve never done an album recording that lasted almost a year, but it was all worth it seeing the result.

Sjunnesson: I certainly consider it to be a stronger album. It’s more dynamic, more playful, and a bit more organic. It’s simple math really; since we allowed all the members to do exactly what they love to do the most musically, and usually that’s a winning concept that generates a fantastic result. We are very proud of this album and we can’t wait to get it out to the fans and tear those songs live! Lyrically this album is a bit darker even if the emphasis should be on “hope.” The story unravels in a very interesting way and there was tons more thought put into this album than the debut. The biggest change is that all the material is recent, while Hell Frost included some Sonic Syndicate leftovers as well as some revisited old Fallen Angels songs, going all the way back to 2002 where it all began. So when you put the albums back to back, you can certainly feel the evolution of the band and its members.

Dead Rhetoric: Given the pedigree of the band, there must have been a number of offers on the table for Fragile Immortality.  How did you decide upon Napalm Records?

Sjunnesson: There’s been a few yes, but we’ve been very picky. We wanted the best and Napalm could offer us just that, so in the end it wasn’t a hard choice. We’re doing great with the guys in Austria and the work rhythm for this album is really flowing great. It has exceeded all expectations! Now we just hope for a successful release so we can dive right into future plans. The decision to go with Napalm Records was sure colored with the fact that there’s a lot of great bands in their roster and they have been supplying a steady stream of quality metal over all the years we’ve been active metal heads.