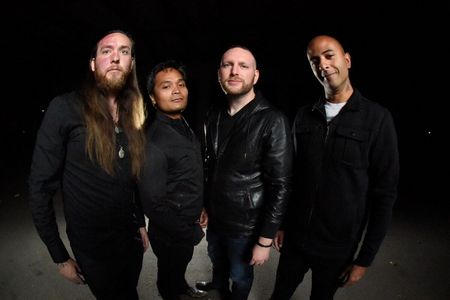 Dead Rhetoric: You recently released a video for “Faradic” – how do you feel the shoot went, and what are thoughts on the importance of visual mediums to get your work across, including some of the playthrough work various band members conduct?

Murphy: We just released the video for “Faradic”- it went really well, and we shot it all ourselves. I think Steve did a really good job with the editing and production of it. It was a pretty long day of shooting- a couple of weeks of editing. We had all that creative say in it, which I think is great. And I think the visual media is bar none the best way to put your music across. People get to put a face to the music- and put a feeling to it. When you see our music video for example, it’s pretty representative of everything we have going on. It’s pretty chaotic, it’s pretty spastic, all the camera movements and angles, the general feeling you get watching it is that same feeling I get playing it or listening to it. It’s a really good way for bands to showcase what they want other people to feel. When you are watching a music video and you can get the feeling of the music across as the artist from the watcher’s perspective- if you can get that same feeling and they get it, the understanding is there, that’s perfect. Audio can do a lot, but some people need that visual aspect. I’ve noticed it spreads a lot faster than even the lyric video that we did- the music video took off and it’s only been 36 hours since we released it. That’s a testament to how well visual media works.

Dead Rhetoric: If you had a chance to wave a magic wand and change any aspect about the music business model of today, what would you work on first and why?

Murphy: That’s a tough question. There are a few things, but if I had to pick one it would probably be record companies getting their hands so far into a band that that band can’t produce art for the sake of producing art. I think a lot of the time with major labels especially- I can’t speak to the independent labels because they mostly take on bands that are usually doing a lot on their own, and aren’t making a ton of money. The major labels, they don’t feed all their bands- they feed the bands that they make money off of, and the smaller bands that aren’t making hundreds of thousands of dollars, they are blindsided. A label needs to back off, and I get everyone has to make money – for covering your own costs and being able to live, get your hands out of everyone’s pockets.

Dead Rhetoric: How would you describe the personalities and friendships within The Summoned? Do you believe it’s important to hang out as friends outside of music related activities?

Murphy: Absolutely- I would not even call my band friends, they are my brothers. We have been through so much that being in a band is a lot like being in a marriage, or a long-term relationship. There’s a lot of trust involved, a lot of give and take involved. If you can build a relationship with the people that you write and perform music with, you should hang out. You should hang out as friends, and we all hang out outside of just playing music. We go to shows together, we have campfires and hang out altogether, have some drinks and play video games. If you are in a band, and the only thing you ever do is play music together, you don’t really make lasting relationships. And as soon as you hit the road, you are going to know how people are right off the bat. You know somebody after that.

Steve, Sam and I have been friends and bandmates for the better part of 13 years. Even three years before we became The Summoned we were already playing together and become friends. We did our first tour together in 2009, and we were on the road for 11 days, and you get to know them after living in a van with them for that long. With our newest guitar player Jared, he’s the man- he’s an awesome guy, great guitar player, solid dude all around. We’ve been on the road with him a bunch of times now, and (he) melds right in with us. We are all total goof balls- we are only serious when we have to be, and that’s when we are talking about very band related things. We joke, we are typical nerds all the time.

Dead Rhetoric: What’s the game plan for The Summoned over the next twelve months?

Murphy: We have a CD release show in June, after that we have one other gig planned at the end of June at Sammy’s Patio in Revere, MA. We are hoping to do some new shows over the summer, maybe weekend bangers leading up to do a 18-19 date tour in the fall for that. After that, do some more circuits, wait a couple of months, do runs for the support of the record. We have already started writing for the next record, but nothing is set in stone. We will continue to play shows, we want to hammer the album out there. It makes our other work… the other things are great, but the new material I love it all around. We are not going to wait six years for the next album. 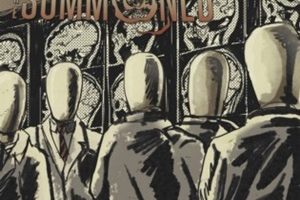