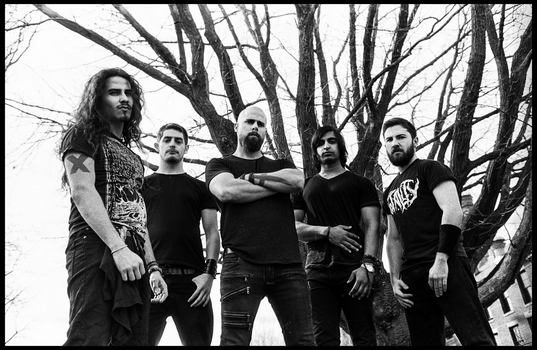 Dead Rhetoric: Would you say that playing more live shows, and seeing how everything fits there will also impact the process?

Nishad George: Yeah, I think we have always written with the intention of playing songs live.

Steve Finn: I remember too, a year and a half ago, we would try songs that weren’t on the EP live, and they didn’t land. I remember thinking, “This might not be a great idea.” Ultimately, I think seeing people’s reaction to what you play live is a real litmus test.

Dead Rhetoric: Initially you put the album out yourselves on Bandcamp. Before you went over to Century Media, did you find that people were purchasing the album on a more global scale?

Steve Finn: I had friends and coworkers buying it. It’s kind of weird, because for me, there are people who had it, but it’s not released. But we are re-releasing it. So there’s a little of that, which I’m grateful for because it means people actually like the music enough to get their hands on it whatever way they can.

Nishad George: When we had the EP done – you always have high hopes when you release something. So we are really happy that with this second round that it will get the justice it deserves. We didn’t think it would be out on Century Media records when we first did it. The fact that it is, and even if there’s a bit of a delay, we are getting a positive send off for it, before we start working on a full-length.

Dead Rhetoric: Newer bands have this mentality to mix genres together. There’s not the need to necessarily do a straight death metal record or what have you. Do you think that metal is more accepting of hybrid sounding bands now?

Steve Finn: I would say yes and no. Yes in the sense that you have bands that are doing crazy stuff that no one has ever done before. A band like Deafheaven – they are black metal but they have a shoegaze aspect. So you can say it’s black metal but it’s kind of not. Why I say no, is that you have people who despise that kind of thing. I think that more people are accepting of crazy ideas, but there are a lot of people out there who are more frightful of that sort of thing. Check YouTube and look at the comments we have gotten already for the video we have.

Nishad George: There’s this real quote to live by that was given to Alex in regard to making the band, “I get success if 50% of people love it and 50% of people hate it.” I don’t want to say that we are hoping to sit there, but I kind of think we have to challenge the genre a little bit. The last thing we want to be, if there’s any M.O. this band has, is that we don’t want to be stock. We want to make music for ourselves and be different in some way. It may have some backlash, and maybe it won’t. We’ll see, but metal fans…there are a lot of them so it’s good. And they are very loyal.

Steve Finn: I just thought about it for a second. I think people in general are more accepting of a diverse type of music. More and more you see regular people, at the gym, blasting metal. There’s still a percentage of metal heads that are super divisive. I don’t know if I could really say. I think it’s pretty polarized in general.

Dead Rhetoric: I agree – I tend to fall into the “I’d rather hear something new” category. There’s no need to be the 500th band to sound exactly like somebody else.

Nishad George: Eric from Genitorturers said to us a zillion times on tour to just be ourselves. “No one is going to be as good as you are, at trying to be yourself.” It’s a little corny but it’s very true. There’s no point in being a second string version of a band that’s already out there.

Dead Rhetoric: We are winding down in the year. Do you have any favorite releases from 2017?

Steve Finn: I’m really wacky. I think my favorite album this year was Clairvoyant by The Contortionist. I know that’s totally not like death metal at all, but that’s where I come from is the more proggy stuff. I loved that album. It’s a totally different direction. The other one I was rocking was Magma by Gojira, but that’s 2016. But I picked it up this year, so if I haven’t seen it, it’s new to me!

Alex Richichi: I’d say my favorite record was probably the new Implore record. I thought it was experimental and new in black metal. I got a lot of happiness out of that record.

Nishad George: I’m going through my Spotify and it’s a mess! I’d say the last three records I listened to, just to simplify it, were the new Marilyn Manson record…it was great. Him going back to being loud and angry was nice. I liked parts of the new Arch Enemy and Trivium records, they were really good. Those were my most recent three.

Dead Rhetoric: You have had the EP release mini-tour, what’s next for The Offering?

Nishad George: We are going to get into a bit of writing mode, but the majority of us will be at NAMM in January. After that, it’s writing and tours until the fall. We’ll see how that next record we keep hyping over this interview is going to go.

Steve Finn: I think it will be an interesting experience for us. I watched a Dream Theater interview years ago, and I’m going to say the same thing. When we wrote the EP, we didn’t necessarily have anyone waiting for it. We were just writing blindfolded, but at this point we are writing knowing that someone is going to see it. It will be an interesting growing experience for us as a band to lockdown and really see what we can come up with when the stakes are raised. I’m personally very excited for it – we live for this sort of stuff. It’s what we do. 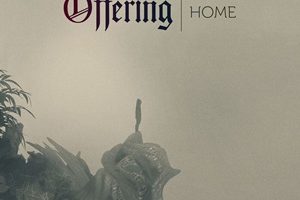