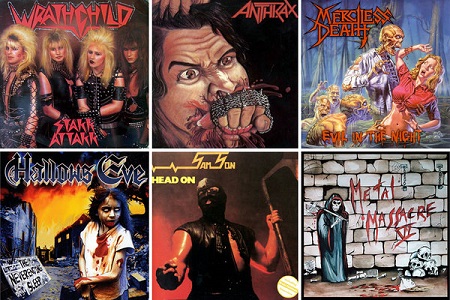 Dead Rhetoric: You brought in some guest contributions like Danny Lilker, Kerry King, and Phil Anselmo, whose closing piece was pretty cool to read. How did you rope him in?

Abrams: When I first approached him, we were thinking of having him to do the forward. We had a great conversation about being a kid, growing up liking this stuff. Then he pointed out to me that growing up and being that kid in the South and trying to find that one other kid who liked Iron Maiden in your town. I grew up in New York – it wasn’t quite as difficult. He turned in this thing and it was this incredible essay about growing up a metal kid and all of the discoveries he made, and all of the stuff he took with him and becoming a band member. I couldn’t have asked for more from him. He could do a book based on those four pages.

Dead Rhetoric: Ozzy doesn’t have much involvement in the book, which makes me curious if you approached his camp and they turned you down. What’s the deal?

Abrams: Frankly, for me, it’s a weird one. I’m an early Black Sabbath fan, but I was never a huge Ozzy solo fan. I just think that he’s gone such an evolution and things have changed so drastically as to what his career looks like and what he represents like the reality show, he just became a big parody. I just feel as though I wouldn’t have been getting something or talking to the same Ozzy Osbourne I’d be writing about in the book. I’m not getting the 1970 Black Sabbath Ozzy Osbourne, which is what we really wanted, so we decided not to. There’s so much funny shit you could say about Ozzy that we didn’t feel the need to talk him.

DR: You also don’t have anything from Dave Mustaine in the book, and you don’t hold back when expressing your opinion of him. Did you have a past with Dave?

Abrams: [laughs] The only background is just being a fan of Metaliica from even when he was in the band and watching his career, and hearing his mouth. And seeing his foot go continuously go into his mouth [laughs]. So, there was no real background other than I’m one of those people that are “Dave, my God, what an idiot. He said another stupid thing.” We did approach him about participating in the book and he was in the only person that out-and-out said no. I don’t think it was for the “wrong reason,” but from what I understand, he was pissed at his management and was turning down everything they were bringing to him. It’s his prerogative of course, but it’s also my prerogative too – bite the hand that feeds, you know? I feel like I’m one of the people that helped put his career on the map. It was disappointing, but Dave Mustaine, even by saying dumb things still keeps himself relevant and he’s an incredible talent, but at the same time, he’s almost like a cartoon character. You can’t take him all the seriously, so I couldn’t get that mad when I found out he wasn’t doing the book.

Dead Rhetoric: The whole point of the book is to open up spirited discussion and debate, so I have one to start with you: You listed Iron Maiden’s Somewhere in Time as one of the “Top 5 Shark-Jumping Recordings.” I couldn’t disagree more…I think it’s their most underrated album.

Abrams: For me, I loved Iron Maiden from record #1. I bought it as an import when it first came out, I saw them on the Killers tour and their first show in the U.S. I liked them when they had Di’anno, then they replaced Di’anno with Bruce Dickinson and put out Number of the Beast and I was like, “Holy shit!” He made them even better. I’m definitely a fan both. I thought Piece of Mind was great, but I thought when they released that album [Somewhere in Time], that’s when they started to experiment a little too much for my liking. I think that they started to think a little too much and adapt to what a larger audience would appreciate, but they already had that larger audience – they were a massive band at that point. I thought the album sounded like they were going for something specific instead of Iron Maiden. I felt it was a real turn-off for me.

Dead Rhetoric: Wrapping up, there has to be at least some thought to doing a follow-up to the book. Have you started thinking about it now that the first book has been released?