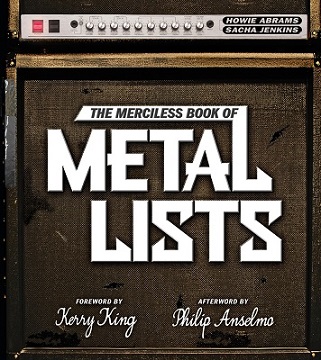 Understanding of the fabric that makes the metal underground so important to many of us, industry vet Howie Abrams and co-author Sacha Jenkins set out to create the ultimate coffee table mainstay in the form of The Merciless Book of Metal Lists. The title says it all – the book is list after list ranging from metal’s best bands…all the way to its more laughable moments. The pair don’t hold anything back, putting their opinions (and obvious disdain for Dave Mustaine) out there with little hesitation or remorse. In turn, it’s the type of book that invites discussion regardless of your metal knowledge. (And yes, even the biggest metal know-it-all can devour this thing.)

Abrams phoned DR HQ to talk about the book’s creation, the cast of characters that got involved and of course, the lists. Here goes…

Dead Rhetoric: For starters, where did the idea for the book originate?

Howie Abrams: The person I co-authored the book with Sacha Jenkins, he’s actually a journalist and he ran magazine several years ago called Ego Trip. His current magazine is called Mass Appeal, but when he had Ego Trip, it was also a bit of a production company. They did a few books under the Ego Trip name, and one of the books was The Book of Rap Lists. And what I loved about that book was that it was written from a fan’s point of view, but it was not the same old lists. It was really left-field and crazy and just facts about the music you had to dig super-deep to dig up. As a fan of music, I just appreciated that book. It became one of those books that once a year, you’d want to read it again.

To fast-forward, I was having a conversation with a friend of mine, and we were having one of those “metal conversations” where like, “That album is so great!” Or, “That album sucks, can you believe that’s the third album they did and they sold out as bad as they did.” So, I hit Sacha up and said, “I think we should do a book like the Book of Rap Lists, but make it for metal.” And he said I was 100% right. He introduced me to his agent and made a proposal and pitched, and believe it or not, we got a publisher within three weeks.

Dead Rhetoric: I think people that aren’t in the know underestimate how big of a market there is for metal. Metal fans tend to eat things like this up pretty quickly.

Abrams: The metal community is super-passionate. I know that growing up as a kid when I’d get an album, you’re listening to it, you’re staring at the album cover, you’re reading the liner notes…you want to know everything. You become really knowledgeable about music while you’re becoming a fan. It’s a pretty incredible community all in all. What’s cool is that when we sent out the proposal, the publisher Abrams Books (no relation), they already had a history with some really great underground and independent books, and they took a flier a months ago on Eddie Trunk’s book. Mind you, he’s a guy with a Sirius Radio show, and That Metal Show, so it would seem that on paper it would be a good idea to do a book with him, but it’s definitely not a given. So his book really surprised people as far as how many copies it sold and what the reaction to it overall. That’s when it dawned on them that there was a market for a book like this in the metal community.

Dead Rhetoric: You had to find some type of cut-off point. Meaning, you could have gone super-obscure and I’m sure there were people that wanted you to. But, you kept it at the appropriate level. How did you determine how deep to go with the lists?

Abrams: I would say one of the hardest things was the cut-off point itself. I don’t think there’s any list in the book where we couldn’t have gone longer. We weren’t trying to educate anybody about anything – that wasn’t the goal. But, we’re also not the type of guys who are like “Look how fucking much we know.” We didn’t want to start mentioning the most obscure bands we could find so people could go, “Gosh, they’re so smart.” Listen, I know where I was in the early 80’s and I know what bands I was seeing, so I don’t have anything to prove. We kept it about music and had no other ulterior motives.

Dead Rhetoric: You’re fighting a losing battle trying to show how much you know. There’s always some internet geek or message board troll who claims he knows more than everyone.

Abrams: It happens every day [laughs]. We’ve seen plenty of that. I can’t worry about internet gangsters. I hate to use the whole cliché, “Opinions are like assholes – everyone has one.” The easiest place to offer one is beyond your keyboard. But that is cool. That’s part of the idea of the book was to just put it out there and let those debates occur. The book to me is like one big fanzine where I get to argue with my friends.

Dead Rhetoric: The “200 Embarassingly Bad Album Covers” list was pretty funny. You had Anthrax’s Fistful of Metal at the top spot, so did Scott [Ian] or Charlie [Benante] give any type of reaction?

Abrams: They haven’t. What’s funny is that one of the PR people working on this is Adrenaline PR and Maria Ferraro. She was their first publicist. I’ve known Scott for years going into the book, so that’s another to be made, that while we may shit on their album cover, it doesn’t mean it’s not a great album. It’s super influential and a big piece of metal and thrash metal history. It’s one of those things where you know they sat down and had discussion on how they wanted the image to have this brutality to it. It’s just horrible…the execution is super-cheesy. Even if you love the band, I think you probably would have rather worn a t-shirt with their logo on it as opposed to that image.