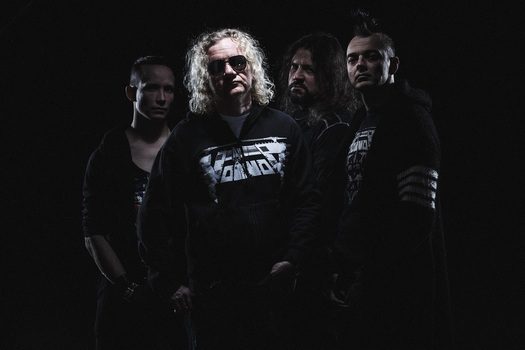 Worry sets in when bands resurrect old material and release product decades beyond its initial development. The old school, nostalgia factor can only take bands so far – sure the old-timers may perk up, but what’s in it for the new generation who may want something fresh from young, hungry musicians? Finnish act The Hirvi never got the chance to release an album during their 1980’s initial run – only issuing a demo in 1989 before breaking up in the early 90’s. Last year, guitarist/vocalist Juha Virtanen felt the need to unleash their stockpile of songs to the world – recruiting as many of the old members as he could along with some players he’s known through the scene to finally issue the debut album in Old School Killspree.

What’s always been interesting regarding Finnish thrash is their willingness to experiment beyond the boundaries established from the US and German scenes. They aren’t afraid to inject odd, dissonant chord progressions or acoustic/clean segments where you would least expect them to pop up – and yet have all the ideas flow and make sense, while not being afraid to take advantage of the modern technology and production advances of today at their disposal. The Hirvi make a perfect case for staying relevant when the strength of the songs stands the test of time. We fired off a series of questions to Juha regarding everything from those old memories of The Hirvi on that first go around, how the new album took shape, the odd band moniker – as well as learning about his favorite concerts that often included sparse turnouts.

Dead Rhetoric: Tell us about the early days of The Hirvi during the late 1980’s – as it was during the first wave of commercial acceptance in thrash. Do you look back at that time fondly?

Juha Virtanen: Everybody missed their youth, right? Well, things were in many aspects so much different back then it seems like a different world altogether. No fucking wi-fi or all this mobile stuff made things simpler, but also limited your options in every aspect of life. Thrash certainly hit Finland like a full grown storm and suddenly there were hundreds of bands playing the metal fast as motherfuckers on speed everywhere. We had weekly thrash nights in clubs and full houses every time. Then it just died as fast as it had arrived. I have actually written a blog about what when on back then on the Finnish Kaaoszine, which is a big webzine here.

Dead Rhetoric: How did you decide upon The Hirvi as your band name – which loosely translates to ‘moose’ in English? What significance does the moose have to any of the band members, if any at all?

Virtanen: Our first guitar player Bude came up with the incredibly stupid country riff that now constitutes the opening theme of The Hirvi-song. We were like, yeah this is some clumsy fucked up shit, let´s NOT name the band with a traditional thrash name. How about that strange animal that crashes into cars all the time?

Dead Rhetoric: What can you tell us regarding the recording of your demo in 1989 – any special memories, surprises, or struggles regarding the studio time and performances? Were you able to get decent sales in the underground and play some killer shows with other Finnish and international acts?

Virtanen: We did a lot of gigs back then with other semi-known bands of the genre. Of bigger names we played at least with Stratovarius and I think Amorphis. That said they were not bigger than us at that time. We sold cassettes. Some guy sent us 5 marks in an envelope and we sent him the cassette on the same envelope. It is certainly easier to get your stuff heard now, but there was a certain charm to (this) as well.

Dead Rhetoric: In 1990 there was a plan for a mini-album and possibly signing to Remedy Records – but that failed to happen. What exactly took place during this time period, as I imagine this is when the first break up of The Hirvi occurred?

Virtanen: Well besides being young we were kinda restless back then. After one gig our bass player Jusa just informed us that he ain´t gonna drive us around anymore (he was the only one with a car) and quit. Because of Nirvana and grunge, the scene was dying anyways, and I wanted to play some Finnish pop music for a change. So we were like “Nah. Fuck this shit.”

Dead Rhetoric: In 2017 a reunion took place to finally record the Hirvi material that appears on Old School Killspree. Take us through the process of convincing the older members to resurrect the band and record these songs properly, taking advantage of the advanced recording/ production techniques to balance out the older qualities of the songs?

Virtanen: I first contacted Jusa because I knew he had been talking about the reunion. Then Hemppa, the old drummer but he was like “Nah, I cannot play thrash anymore”. Out of very lucky coincidence Otto quit Rytmihäiriö and was like totally the only man for the job. We had been playing some Hirvi stuff with Otto during the eighties, before The Hirvi came to existence and he is THE MAN when it comes to banging the shit out of the drums. Joni I knew from playing on Khroma, which is a band I kinda do management for.

About the techniques and recording we kinda had to reinvent the songs all over again. I did not want this to be purely nostalgic trip but a modern metal record.

Dead Rhetoric: Your style of thrash metal incorporates many influences from Europe and America, plus some intriguing chord sequences that can be traditional one minute, then very Coroner/Voivod-like the next. What qualities do you think make the grade from inception to final output for The Hirvi when it comes to the songwriting – and what types of lyrical topics do you like to uncover?

Virtanen: I am an extremely slow and demanding songwriter with a tendency to get unbelievably frustrated when things do not work out. I do not know why I even do songs, because there is so much suffering and shit involved. Guess there is a built in need for me to communicate like that. Out of genre orientation I do not really give a fuck. What is good stuff is good stuff, and I have never thought like “I cannot do this here, it´s so totally different, let’s do the traditional tritonus shit instead.”

Dead Rhetoric: Where do you see the state of thrash currently in comparison to those early 1980’s years? Do you have affinity and respect for both the old school artists as well as newer bands that maybe incorporate different influences?

Virtanen: Everybody working on music with real effort deserves a medal or a beating, depending on how you look at things. I mean the probability of getting the dollar thing rolling in this business is extremely low and the price you pay for it can be really high. So everybody of us must be doing this both out of love and extreme stupidity.

Dead Rhetoric: How do you feel about many older bands getting a second chance at acceptance in the metal music landscape – especially given the content, information, and communication present through the internet and social media?

Virtanen: I am not truly about nostalgia, I usually listen to the modern stuff and younger bands. But again if it´s good it´s good. For me it is important to do things with full throttle, to have effort. Sometimes I listen to some old band and cannot help but think like “Yeah, it´s alright guys. I understand you do music to have beer and hang out with your friends but please sweat a bit for me would you?”

Dead Rhetoric: Are there plans to work on a second album of The Hirvi material which would be brand new with the current lineup – or possibly playing some shows in support of Old School Killspree? I would imagine that the band is realistic with the level of support you can give to this, having day jobs, careers, and families beyond your music endeavors…

Virtanen: We will come out with some totally new stuff in the near future, but an entire new album will have to wait. Yeah, by sacrifice I mean exactly you are risking losing everything you just mentioned living like this.

Dead Rhetoric: Scandinavia – and Finland in general – has always been a popular breeding ground for metal, as bands in various genres have made a huge international impact on the scene. Do you think it’s a combination of the people, the environment, the surroundings, and outlook that have contributed to this culture – or other factors?

Virtanen: Finns are kinda gloomy and drama-oriented by design, which has all to do with these factors. So naturally metal has strong following here. The newer generations prefer rap and EDM though, maybe things are changing for a lighter approach. Then I must move to Greenland.

Dead Rhetoric: What do you consider five of the best metal albums of all-time – and what are some of your favorite concert memories that you can recall just as a spectator in the audience?

Out of memorable concerts almost all of the memories I am really fond of have some sort of nonmusical aspects. We booked a gig for Russian doom metal bands last year. The audience consisted of 8 people. There was this really beautiful Belarus cello player young woman in one of the bands playing for no audience at all. But she still played with such grace and defiance, forming this really strange almost chaotic noise. I thought that this is the meaning of my life.

Dead Rhetoric: How would you describe the personalities of the band members within the Hirvi? And what types of hobbies/ interests do the members have outside of music that you like to pursue when you have the free time to do so?

Virtanen: Because of my degree and profession I do have to train and practice math and physics. I also play frisbee golf and do crossfit/gym things. I actually have no idea what the others are up to. Well everybody likes to drink beer, that is for sure.

Dead Rhetoric: What’s on the horizon for The Hirvi over the next twelve months as far as activities, shows, recordings, videos, etc.? Are there other projects/bands that the members have going as well that you would like to let the readers know about?

Virtanen: We are planning on touring some more, then releasing a new video during summer already. 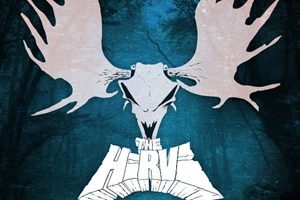