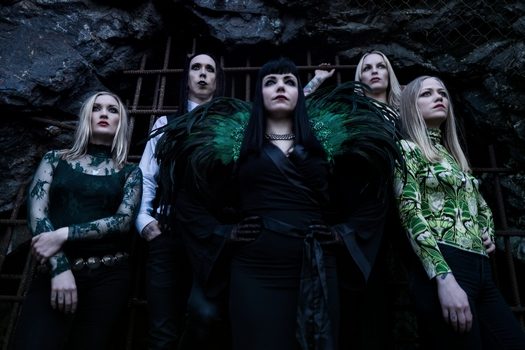 Forming somewhat from the ashes of Crucified Barbara, and featuring Klara Force, Ida Evileye, and Nicki Wikkid in their ranks, alongside Deathstars’ Skinny and vocalist Pepper Potemkin, The Heard, by name alone should grab some attention. And while some bands might be willing to just stick with that as a driving force, The Heard has much more to offer. Totally different in light of what Crucified Barbara had to offer, it’s a new landscape to experiment musically.

With some elements of doom metal alongside hard rock, the thing that captures the imagination about their debut, The Island, is the atmosphere that surrounds it. With a personal connection to the concept, there’s a haunting feeling surrounding the album, which is thoroughly genuine in tone. It’s captivating, and catchy. To fill in more of the gaps, we were able to chat with bassist Ida Evileye, who went into more details surrounding The Island, Crucified Barbara’s split, and where The Heard can go from here.

Dead Rhetoric: Where did the initial spark come from to form The Heard after Crucified Barbara broke up?

Ida Evileye: Me, Klara [Force], and Nikki [Wicked] all knew we wanted to continue to play together, and the seed to develop the music had already been planted when we were in Crucified Barbara. We felt a little bit stuck by the genre of music we were playing. It was a big opportunity and a second chance to do something completely different than what we had done before. It was pretty natural.

Dead Rhetoric: Do you have any nervousness about the band being looked at as simply the next iteration of Crucified Barbara?

Evileye: Yeah, I’ve had some of those thoughts but in the end it doesn’t get to me and I don’t really care about that. I know that we are doing something that we like. I’ve already achieved a lot of my goals in playing music with Crucified Barbara –touring and seeing different cultures and people, for example. The music has already taken me so many places, so I don’t feel I need to prove anything to myself or anyone else.

It’s also a part of growing up and getting older – you aren’t quite as dependent on other people’s thoughts anymore. You are more easy going. I think that the music that we play with The Heard is very close to Crucified Barbara. I don’t think we will be compared. Of course, as musicians or as a hard rock band, but it’s not like, “Oh you are a bad copy [of Crucified Barbara], or you are not as good.” We are doing a different type of music, even though it is still in hard rock.

Evileye: To actually dig deep into the songwriting process and my instrument. Also what we can create together. This time around, we chose the studio because of all of the equipment that was there for us to use. It was very inspiring and new, at least for us, in looking at the music and what we can create. That I found very interesting. Also, maybe on stage – working on the visual aspects. We want the music to be reflected on stage in a creative way. Instead of trying to do as many gigs as possible, we want to define the things that we find most interesting, which are the songwriting and visual expression.

Dead Rhetoric: So it’s almost like you created a new set of challenges to push yourselves towards…

Evileye: Yeah, I think so. That wasn’t something that we made up from the beginning, once we started we felt there were so many things we could explore it was fun to do. It was a wheel that started rolling as we started, and along the way we found new things that were interesting. For instance, we focused on the lyrics and what they are about. We tried to develop that as much as far as it could take us. It was a freeing process, and it felt good and honest from the start.

Dead Rhetoric: How do you describe the sound and atmosphere of The Heard? I think it’s one of the stronger aspects of the album.

Evileye: I think that is what we are trying to communicate as well. It is a concept album and it revolves around characters that are located on an island on an archipelago off of Stockholm [Sweden], where I have spent every summer since I was a child. Our guitar player, Skinny used to live out there for a while. We started talking about that island and the characters there, and the almost mythical stories – some were almost supernatural, and we found it all very interesting. Once we had decided what the album was about, and what the lyrics were, I started to record sounds from the woods and the wind from the sea, to have the authentic sounds from the island to put on the record.

Dead Rhetoric: So being personally involved with the island on the album, how much of the material from a lyrical perspective was things that you had either seen or heard?

Evileye: I’d say about 25% of it actually happened. Some of the lyrics are based around events, but we had to make it an interesting story and put some fiction into it to make it whole. Some lyrics are inspired by other things that we were interested in at the time. As soon as we found the focus, we tried to write lyrics that could have been about the island but weren’t self-lived.

Dead Rhetoric: So is this something that you’d like to continue to pursue with the band, having some sort of concept to accompany the album?

Evileye: Yeah, but I think we have taken The Island concept as far as we can. All of us found it interesting to write lyrics this way and create an atmosphere based around it. What we were talking about doing next is to choose another subject we are interested in and have a lot of thoughts/opinions on and develop that into something new.

Dead Rhetoric: What experience did you use when starting The Heard that was gained from your previous years in the music industry?

Evileye: I wanted to make it be about the joy of playing, and to make it fun. Not to tour as much as possible just for the sake of it. We want to pick and choose – we aren’t at the place that we can pick and choose but we can say no to things that wouldn’t feel motivated. Things that would take more joy out of the band than bring into it. We are always trying to keep that in mind – what we actually want to do. Is it more fun to stay at home and write some songs than to do some wild shows and gigs? Or is it better to play every weekend in Stockholm to have an income and put that money into things like the lighting for shows. We are at the point where we ask ourselves, “Is this fun? Do we want this?”

Dead Rhetoric: What are your thoughts on playing bass – what is the role of the instrument in your music?

Evileye: I think that when it comes to our band, since we are playing a lot of harmonies and have two different guitar players doing two different things, I as the bass player am doing a third thing a lot of the time. I have both the rhythmical and melodic part, I can make that a whole together with the drums. It’s almost orchestrated at some points in the songs – that’s a new way of thinking and writing for me. We had been exploring that a little bit with Crucified Barbara but it was more about regular guitar riffs and the bass supporting the guitars. Now it’s like I’m living life on my own and I love that!

Dead Rhetoric: What do you look at the role of music being in your life, having been a part of it for so long?

Dead Rhetoric: Looking back on the Crucified Barbara break-up two years ago, what are your thoughts in retrospect? Are you happy with the way that it went?

Evileye: I would change some of the things but I think it was inevitable. We were in a bad place, and we had toured so much. We were not at the point where we could earn actual money from the music, so it was a hassle all the time to combine the everyday life with the amount of touring we did. It took a toll on everybody. We were stressed out and it got to the point where it was affecting mental health. It drained us in that sense.

Of course, in hindsight if we could see that before it got so bad, but we weren’t able to. We thought we could save it, but we couldn’t so we should have taken a break before we split up. Nowadays, since we have The Heard and I really love what we are doing, I’m not sad or feel bad about it. It was just a natural thing.

Dead Rhetoric: it gave you a little bit of time to reflect on what you had done…

Evileye: Yeah, and sometimes I think that you kind of…maybe this is not the right word, but you get stuck and you become a product of yourself. You are stuck with the sound and the output of what people expect you to do, and what you expect yourself to do. It’s not easy to get out of that box by yourself when you have all of these memories and expectations of what you are supposed to be like. So now, no one expects anything and you can do what you want here. Since we have that opportunity, it was much easier to find the freedom of writing whatever type of music we wanted.

Dead Rhetoric: Looking at your musical career in general, what are some of your favorite experiences that you’ve had?

Evileye: I think in 2006, when we had only been out with an album for two years we did a tour with Motorhead in England. They showed us what a big audience could be like, and they treated us really well. That’s a memory that I will cherish. I also met one of my closest friends then, that I still hang out with today, so that was a big highlight. I must say, we just got back from Japan and Tokyo with The Heard, and that experience is one of the greater ones that I have had in a long time.

Dead Rhetoric: What’s next for The Heard outside the album release?

Evileye: We are looking at 2019 and doing gigs. We are focused on doing a tour and some festivals. We would love to come to the States. We did two tours with Crucified Barbara and I love it. You have so much to offer, and I would love to see more. I’d love to meet people and see all of the cool cities. That would be a dream nowadays, to take The Heard to the States. 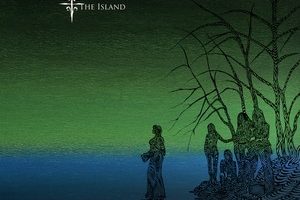