The Haunted – Roamers and Wanderers 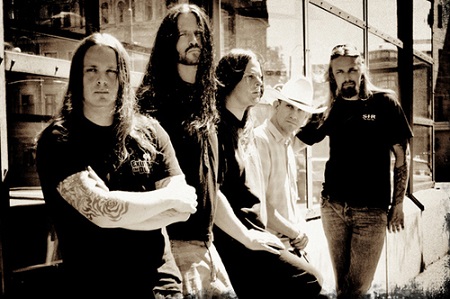 A sight this scribe will never forget is a sullen Anders Bjorler occupying the bar area at the now-vacant Club Laga in Pittsburgh. In the midst of their Spring Neck-Break Tour with Cannibal Corpse, Dimmu Borgir, and a then-unknown Lamb of God, The Haunted were picking up steam on their seminal Made Me Do It album, with a relentless touring schedule in place. For an emerging European band that was financially strapped and emotionally drained, the trials and tribulations of touring had clearly taken its toll on the guitarist. Looking at Bjorler that night in May of 2001, clearly bummed out, longing for home, came to the fore upon viewing the band’s new Roadkill DVD.

Shot and edited by Bjorler, Roadkill gives an unflattering glimpse of touring life. Veterans of many tours (some good, some not-so good), The Haunted have developed their own patterns to combat the monotony of the road, of which are on full display here. It’s not an easy life, especially if you’re struggling to break out from the massive log-jam that is the heavy metal underground. And if you’re wondering about Bjorler, he begrudgingly tours, probably because he knows no different.

Bjorler phoned Blistering to discuss Roadkill, which was our primary source of discussion, but like any discussion with an ex-member of a famous, defunct band (read: At the Gates), there invariably will be some words exchanged on the topic. And there were…

Blistering.com: You have two DVD’s coming out at the same time:Roadkill for the Haunted and the At the Gates [The Flames of the End] set. Tired of sitting in the editing room?

Anders Bjorler: Yeah, it’s good fun. I’ve learned a lot and have had a good time with the people I worked with on these. I started with Roadkill a couple of years ago, so I’ve spent the most time with it. That’s the movie I learned the most from. I did “The Drowning” video and decided to do a documentary since the material was so overwhelming. It has been a fun ride. After the At the Gates reunion, everything was going away so I know I needed to do a final chapter.

Blistering.com: When did you take to doing filming and editing?

Bjorler: I was suddenly very interested in films from an early age. I watched a lot of films and DVDs and was interested in American movie culture. I’ve been interested in that for a while. In connection with the music, the combination of the visual and music has always been very appealing to me. Music videos, documentaries, so I’ve done a few of those and will hopefully do more.

Blistering.com: Roadkill is very dark and it makes touring look like not the party atmosphere everyone makes it out to be. How did you go about realizing that vision?

Bjorler: Yeah, I just wanted to paint a different picture. Of course there are parties, but the only difference is that we didn’t have the camera on during the party [laughs]. Otherwise, we’re just focused on having a good time and drinking. The main idea is hard to explain how touring works, but there’s a lot of time to kill and you’re looking for things to do. Not all of it is dark – there’s some positive things about it. To the general public, it’s good to have a more realistic view of it. We so much enjoy that hour of playing that overshadows all of the bad stuff for sure. It makes it worthwhile.

Blistering.com: You took a leave from the band in 2001 and part of 2002 to get away from touring. Do those thoughts ever creep back into your head while on the road?

Bjorler: I think everybody gets like that. If you’re stranded in another country, it gets different, but some people are fortunate as to where they can absorb it on the road. If you can’t find that, it gets very tedious and boring.

Blistering.com: It looks like the relationship in the band with [singer] Dolving being back and Per [Moller Jensen, drums] fully entrenched is a good situation.

Bjorler: The fact that we’re older and more mature. Some of us are over 40 years old…there’s no real arguments anymore, just discussions. As a group you tend to develop tolerance more and you’re open more; people can say stuff. I was very protective of my musical ideas, but I’ve grown to understand some people think their views are important, so I’ve grown to accept that. The whole thing, the band, everybody has their own ideas. We are five very different people with very different musical backgrounds.

Blistering.com: What do you have in mind with the new material for the Haunted?

Bjorler: The Haunted will always be putting out something different than the last time. I don’t know why we change so much between each record…some bands have this dedication to a sound or style and put out almost the same album over and over again. We’re not like that. We don’t have revolutionary ideas, but we take small steps in different directions, mostly because there are some details from the previous albums that we didn’t like, so we try to improve upon them. The new album, I would say, would be more like The Dead Eye.

Blistering.com: How do you react to those constant requests to do another album like the self-titled debut or Made Me Do It?

Bjorler: [pauses] As I said before, we want to renew ourselves; we don’t want to do the same thing. With the first Haunted album…it’s not what we’re looking for right now. We’re very proud of everything we’ve done. The first album worked back then, it’s our first album. Putting that out now…it’s not going to work. Putting out the same album over and over, that’s selling out.

Blistering.com: You were fresh off At the Gates and working Earache again during that time. How much of it sticks in your mind?

Bjorler: We got off touring with At the Gates, lots of touring and tension, so we got back into the Haunted rehearsal room like we did back in 1990 when we started with At the Gates. I was inspired by a lot of things and that’s what made it interesting again. We didn’t even have a singer until a year or a year and a half after we started, but it was a very positive environment.

Blistering.com: Going back even further, so many people have utilized the riffing style you helped create. Have you ever sat down and taken into account how often your ideas are recycled?

Bjorler: Yeah, it’s more flattering to me that I’ve inspired people than anything.

Blistering.com: Any temptation to start some type of retro, fun band to get those riffs out of your system again?

Bjorler: I think I still have those riffs; they’re in the mix of what we do know. We have the history in there, somehow, but they may not be 100% thrash [laughs]. When you’re at a party, drinking, those drunken projects come up. But nothing ever happens. It seems to me that all of those bands do it for the love the music.

Blistering.com: Do you share my opinion that Terminal Spirit Disease is a better album than Slaughter of the Soul?

Bjorler: It’s hard to say for me personally. After doing the documentary, I value the old albums as just as much. I haven’t listened to those for 20 years [laughs]. They’re all favorites of mine. The old albums have strange production, but they’re strong still.