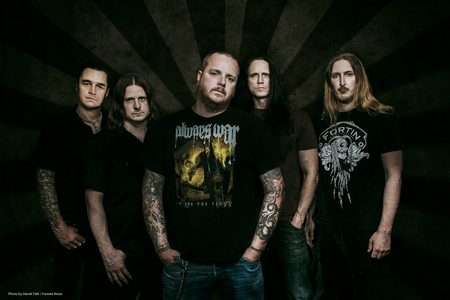 Back in 2012, not one, nor two, but three members left The Haunted. Long-time vocalist Peter Dolving first parted ways, followed there after by Anders Bjorler and Per Jensen. Things seemed bleak for the band, with the murky statement of Jonas Bjorler and Patrik Jensen’s “being fully committed to The Haunted” being the only vital signs for the band. Then in June of 2013, The Haunted broke through with the news that made many a metal fan excited. The new line-up of The Haunted was announced, and it seemed a bit familiar for the most part. Joining Jonas and Patrik would be Ola Englund, original skinsman Adrian Erlandsson, and former vocalist Marco Aro.

The Haunted wet the taste buds of fans by releasing a three song EP, Eye of the Storm, at the beginning of 2014 and now we are merely weeks away from the first full output of this re-energized version of The Haunted. An album that’s sure to please long-time fans, as the band has once more gripped their aggressive thrash roots, Exit Wounds finds The Haunted at the top of their game. Given the opportunity to chat with none other than returning vocalist Marco Aro, who could say no? We discuss his return to the band, scheduling issues, and The Haunted’s philosophy circa 2014. Read on…

Dead Rhetoric: You’ve been pretty busy since you left The Haunted originally, with Face Down and The Resistance. How did it feel to get back into the studio with The Haunted?

Dead Rhetoric: I know there are a lot of people that were upset that you left The Haunted and have been waiting a long time for you to return. How did the band decide the direction you would take with Exit Wounds?

Aro: There’s always going to be a Marco-camp and a Peter-camp. Even back then there were die-hards in each direction. We are still really good friends with Peter and Anders and Per; there’s no animosity. When we decided to do this album, we were thinking about where we would pick up from. Would we go down a road similar to The Unseen or would we do something else? And then Ola wrote a song called “Kill the Light,” and that was the song that made us say, “this is the road we are going to take.” He wrote that song out of a pure fan perspective, since he is the only member of the band that has no previous history with The Haunted.

Dead Rhetoric: If you had heard a different song, one that was less aggressive, would you still have joined with The Haunted again?

Aro: Yes, because they’ve always been really good friends and I’ve missed them. I didn’t really keep track of what they were doing when I wasn’t in the band. When we were rehearsing for the live set, there were a few songs that I had never heard before. The live set that we do now incorporates 2-3 songs from each album just to give everyone a taste of their own. We are doing “No Compromise,” “The Flood,” “The Medication,” “All Against All,” “99,” and “Guilt Trip.” I had never heard “Guilt Trip,” “The Flood,” and “The Medication” before so it was a neat experience to get acquainted with that era of The Haunted.

Dead Rhetoric: So what did make you finally decide to come back to The Haunted?

Aro: I was pretty much done with the band and the whole negative part of the music industry when I left. Even though I left the band, we were still good friends, and I spoke with the guys like once a month. Then Jensen called me up in March [2013] and we started the usual chitchat and he all of a sudden said, “You know what I’m going to ask you.” And I said, “Please, don’t even ask” but then he laid out the format for The Haunted 2013 and onwards, and it sounded appealing. So I asked for 1-2 weeks to set things straight with family and The Resistance to make sure that everyone was on board with it. The history with The Haunted and my family back then versus now is completely different. I was in a different place back then.

Dead Rhetoric: Does the album title, Exit Wounds, stem from The Haunted losing so many members in 2012?

Aro: It’s actually a tribute to the people that left because they were talented musicians and big personalities, so it left gaping wounds in the band, both in the personal and professional sense. It was originally going to be called Songs From the Exit Wound but we remembered the Napalm Death album [Words From the Exit Wound] so we just decided on Exit Wounds. They left a big hole in the band, and we are trying to fill it as best we can, and I believe we pulled it off.

Dead Rhetoric: Absolutely, I think there will be a lot of people talking about a comeback.

Aro: I think its phoenix rising kind of thing, but with respect to the history of the band. It’s not like every other band when they decide on a new member (vocalist/guitarist/etc) and they scrap the old songs and just do the new ones. The Haunted has a solid base, where everyone is still good friends and there is no animosity between members and ex-members. I still get to talk to Per and Anders quite a bit. I don’t get to talk to Peter that much though since he moved to Copenhagen. People want there to be an animosity kind of thing but there isn’t anything like that.

Dead Rhetoric: That’s cool though, it’s almost like the band is cyclic with members.

Aro: It is [laughs], it’s kickass to play with Adrian again, even though I miss my friend Per as well. When I joined the band, Adrian was still in the band but then he got an offer that he couldn’t refuse [Cradle of Filth]. We did three live shows together and a bunch of rehearsals before Per joined the band. It’s like a family get together kind of thing, but still missing a few. There are a few that couldn’t make the trip but it’s still one really big family.

Dead Rhetoric: The lyrics of “Trend Killer” and “Psychonaut” seem a bit personal; what are those two songs about?

Aro: “Psychonaut” is about a dysfunctional love affair, which is me and drugs. Back in the day when I left the band, I had three love affairs: music, family, and drugs. You have this one love affair that is constantly doing it’s damnest to kill you. It’s an exploratory song about why I left The Haunted. “We are so alike, and it makes me sick, we will always be each other’s sin.”

“Trend Killer” was a written in a particular point of view, of a few people in the music industry, you know, the type that just cannot accept other bands and what they do and that’s the jist of the song. It’s about a guy rising to the top of the heap and then falling flat on his fucking face. When Jensen wrote the lyrics, I said to him, “we can’t sing this.” But then he explained it and I started to understand it. Chuck [Billy] felt the same way until Jensen explained to him.