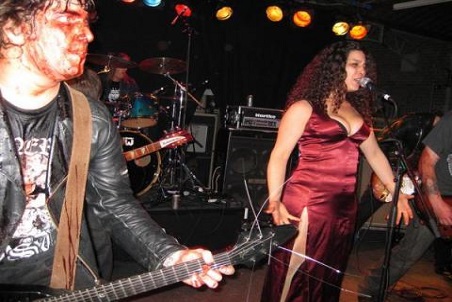 Blistering.com: You made an interesting point by saying you’ve done everything wrong up until this point. Is that in other people’s eyes or your own?

Lemouchi: The way the business world or the heavy metal world looks at how a career should be made. For two years, we refused to get pictures made, we seldom do interviews with the lead singer, but with the guitar player, we use blood onstage, we don’t use our real names…stuff like this is what every record company hates. They don’t want to see stuff like that. They want to see a band that is happy to jump in front of the camera or do a million interviews or will answer any idiotic question or do anything they have to gain success. We have principles that we will not go over; there are certain things we will not do, and it doesn’t make us very popular from a business point of view, but we did do well from a business point of view. I guess that’s the paradox of what we do.

Blistering.com: To your point, because you aren’t in everyone’s faces all of the time you’ll never run the risk of oversaturation.

Lemouchi: I have no idea. We did it this way because we feel comfortable doing it this way.

Blistering.com: This is your second full-length album, so what was your mindset going into the recording?

Lemouchi: Pretty confident. I spent most of the year writing the songs, recording them, and rehearsing them with the band. We had a lineup change so we had to get a new drummer halfway through the process. There were more than a few reasons to freak out, but I know what I’m going to do, and I know it’s going to be good. I see a very clear structure in which I have to build. Certainly with this recording session, the scope of it was much wider. In comparison to The Time of No Time Evermore, it was an easier record to record. We have gotten better as musicians and the producer and I have become a stronger team by working together more. It’s difficult to say, the work on the record was very easy and made for a very comfortable process.

Blistering.com: One of the initial thoughts I had from the album was that you took more chances this time out, and the part that always sticks out for me is the middle section of “Cruel Lover” where you have basically a dance part. What made you go that route?

Lemouchi: I don’t know…it’s just out there [laughs]. It’s not something I consciously think of. The chord progression and vocals and we started recording it, we immediately felt a certain vibe and we just go with it. I wish I could say, no I don’t wish I could say – certain musicians wish they could have songs with a certain beat. Maybe sometimes that’s true, but for me, it’s always impossible to reason with that. The song itself sounds how it wants to sound. The content creates the form, not the other way around.

Blistering.com: The female vocals are also a big focal point here, especially on “Within the Charnal House of Love” and “She.” Describe to me some of the growth your singer went through.

Lemouchi: Our singer did go through a lot of training the last couple of years. Not that she really needed it, but there are lots of musicians that work on instinct only that know only basic technique and knowledge of their instrument, which is where I am as a guitarist because I have to work so fucking hard to get the things done that I want to get done [laughs]. There’s a limit to what you can do in that case, and by sending her to vocal school, we found that she was only using 50 or 60% of her capacity and every few weeks when she’d come back and sing in the rehearsal room, it became clear it could never be recorded in the same manner as previous records because she was simply too good now. We decided in the studio to no longer double her vocal lines, so every track with the lead vocals was only one take. That was a big step, and once she embraced the idea, the quality started to speak for itself.

Blistering.com: As a songwriter, that has to be exciting having someone in the band who has only scratched the surface in terms of their capability.

Lemouchi: Yes, but it’s very frustrating as well [laughs]. It sounds like a great thing, but you never what’s going to happen with her [laughs].

Blistering.com: How do you foresee your touring schedule unfolding with the new album and label? You’ve been picky in terms what you shows you do before, so do you see that remaining status quo?

Lemouchi: We will not change stage appearance or way of communicating or way of making music. It’s really been our way or the highway. We’ve been able to do what we wanted to do and if we can’t, then we stop doing it. It makes no sense to throw away those principles, and then you have nothing left.

Blistering.com: So no slogging it out cramped buses and vans on a regular basis?

Lemouchi: We’ve done that before; we’ve been stuck in a bus [laughs]. It has to make sense to us to do something. We know that some stuff is a sacrifice, but we have to enjoy the benefits when the harvest comes, our fruits will be there. If we have the feeling that we have to settle on our position, that’s when we know that we can’t. Those kind of principles are not about wanting to sit in a cramped bus or playing a shitty venue, because that’s the stuff that happens. It’s more about who we are playing with and why. Do we feel comfortable working with these people? If the answer is “no,” then we’ll ask the label to get someone else.