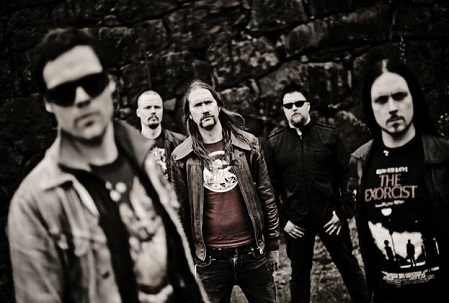 In the annals of underrated death metal bands, perhaps no band in recent memory stands out more than The Crown. Their thoroughbred brand of DM wreaked plenty of havoc in the late 90’s/early 00’s via the likes of Hell Is Here,Deathrace King (“Rebel Angel” is one of the most fun death metal songs ever) and their supposed 2003 swansong, Possessed 13. But as the story would have it, touring overload and financial issues prompted the Swedes to call it a day in 2004, at arguably their creative peak.

We wouldn’t be talking about the band today if they didn’t come back, and sure enough 2010 sees the release of Doomsday King, an album that surpasses the blinding speed of its predecessors. Joined by new God Macabre vocalist Jonas Stålhammar who steps in for Johan Lindstrand, The Crown appears as if they haven’t missed a (blast) beat, something founding member and guitarist Marko Tervonen was more than happy to discuss with Blistering…

Blistering.com: From my standpoint, you broke up too early. In hindsight, was it the right move?

Marko Tervonen: [pauses] Now that I look back it at, absolutely we made the right choice. We would have burned ourselves out. The break was absolutely necessary in so many ways – both from a creative aspect and other stuff. During the break, we had time to do other stuff, a chance like getting our families in shape and stuff like that. We are all parents now, which is pretty amazing. We started The Crown when we were kids; basically 15 years-old and for the last part, we did a lot of touring and shows and it consumed. It consumed all the time we had. It was The Crown 24/7, all the time.

We all had kids, and have gotten in shape, have normal jobs, that kind of stuff, but now we have new-found energy to do The Crown, and that is amazing. The Crown, for the future, we will not do extensive touring. We’ll do selective shows here and there, focus on recording and putting out new albums. Hopefully we can continue that way – it’s the only way we can survive. We can’t continue [that] way – we wouldn’t be able to do this. The Crown isn’t the main breadwinner for us. This is a fantastic situation for us to be in – we can actually say “no” to a lot of shows and tour offers and be selective. That’s a good thing.

Blistering.com: Just to backtrack, Possessed 13 might be your most well-rounded album. Is that how you felt when you put the band to rest?

Tervonen: I think it’s a really cool album. For that album, we basically emptied our old ideas. There were a lot of old riffs that we finally we managed to use. We were completely empty of ideas [laughs]. Actually, not that many people know this, but we started to rehearse for a new album, and that sounded completely different. During the break, I did two albums for Angel Blake and Magnus [Olseft, bass] did an album for Stolen Police Car, and that was how the new songs sounded, that’s how much we were going to chance. Luckily, we decided to focus just on death metal with The Crown. For me, Possessed 13 is getting a very good follow-up album [with Doomsday King]. There’s no need to experiment, we found death metal to be very interesting again.

Blistering.com: When did you start getting the itch to put the band back together? I know you had [pre-The Crown reformation act] Doberman in the works, but that eventually turned into The Crown.

Tervonen: We had the mindset when we did The Doberman album, that’s how it started out. During the process of recording, it became so obvious that it sounded like The Crown, we changed the singer, we thought about calling the band The Crown-like, but it sounded a bit silly. So we decided to call it The Crown. Then we started contacting labels and getting feelers.

Blistering.com: Are these all-new ideas for Doomsday King then?

Tervonen: Mostly new. I’d say some are over a year. Some of the songs at the end of the album are pretty fresh. We’ve had a lot of time to fine-tune this album. We’ve had years to get this together [laughs].