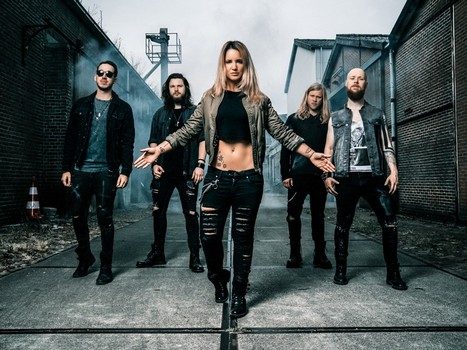 It’s hard to keep track of all the different bands coming out of the woodwork in the metal scene today. So many bands with the cookie-cutter approach in full effect, offering only the smallest adjustments to a formula that is calculated for maximum success. So what’s a band to do when they realize that maybe their approach wasn’t working the best for them? In the case of The Charm The Fury, you go back to the classics and see how they differed in their scheme.

After gaining some European ground with their first album, A Shade of My Former Self, the young act signed with industry titan Nuclear Blast Records and started designing their second full-length album. An album that was going to see some distinctive changes in sound and maturity. The result, the rapidly approaching sophomore release The Sick, Dumb & Happy is a breath of fresh air. Shifts from heavy and explosive grooves to sincere melodies to accompany some socially/politically-charged topics are par for the course – without being too preachy, and keeping things fun. Vocalist Caroline Westendorp and drummer Mathijs Tieken were able to chat with DR about the album, changes in their sound, future goals, and what makes an album truly timeless.

Dead Rhetoric: What’s behind the name The Charm The Fury?

Caroline Westendorp: It’s funny, we actually were in the rehearsal room after jamming a few times and were like, “we should get a band name” – we were just scrolling through our iTunes and looking at albums and band names, and we saw “The Charm” by Unearth and thought that was cool, and we went with it.

Mathijs Tieken: It’s like the least cool story of a name ever [laughs]. Once we had the name, it makes sense. Caroline – she’s very charming and very furious at the same time [laughs]. It works in retrospect.

Dead Rhetoric: How did the deal with Nuclear Blast come about?

Westendorp: We were in LA in April and were playing at a rock summit. Martijn [Swier], our manager has good connections – he is the manager of Within Temptation as well. So he has great connections with Nuclear Blast through Within Temptation, so he asked Gerardo [Martinez] to come to our gig and that’s where it all happened at our show at the Whisky-a-Go-Go.

Tieken: It was the smallest thing – the venue actually wasn’t that small but there was no one there. Everyone that was there were music industry [people] – there was no moshpit, just people looking and staring and seeing what the bands were about. So we were up at the front trying to not care about the absence of moshpits and crowdsurfing and gave it our all.

Tieken: Even after that, it was like 6 months before we were actually signed. So we had checked out other labels, but Nuclear Blast was always on the top of our list. We had kept in touch the whole time, but it had been very unclear. After six months, there was an offer out of the blue. It was very cool.

Dead Rhetoric: How do you feel that The Sick, Dumb & Happy differs from your previous album, A Shade of My Former Self?

Westendorp: We used to be very metalcore – which we think was kind of like a phase we were in. We were listening to all these metalcore bands…nowadays, it’s gotten a negative connotation to it. I think we didn’t feel the subgenre anymore and were looking into who we were and what are we all about [as a band] and who do we listen to, and who are our favorite bands that have always been there were. Bands that were timeless.

Tieken: When we started the band, there’s always been some new thing going on, and I guess it’s easy to jump on that thing, and that’s what we did. There was that sound that was happening at the moment and we jumped on it – we liked the sound as well. But a couple of years later, you’ve found the sound has changed already and there’s already a new thing going on. You get stuck in this [feeling] – this isn’t really meant to last. It didn’t really feel like it would hold over time. Like Caroline said, we started thinking – what [music] has stuck with us over the years? For most of us, it’s those more classic metal bands. Bands like Pantera and Slipknot – bands that have stood the test of time, even ten years later. When you first started listening to it, you were a teenager and now as an adult, you can still feel the same tunes – that’s timeless music, and that’s what you want to make.

Dead Rhetoric: So do you feel with this album, you’ve tapped into more of the approach or sound that you were looking to do – something that’s more your own?

Tieken: Definitely. I think we have looked at certain bands that influenced us, and you can hear who those bands are. But still, it’s your own songwriting and you already have a specific sound because you have your own vocalist and style of music. It’s a matter of taking what you like from other bands and putting your own spin on it. I think that’s the classic story of making music – if you go back to guys like Led Zeppelin…they were heavily inspired by some blues artist which most people probably don’t even know about, but if you knew the blues artist you knew exactly where they got it from…but they gave it a spin of their own. That’s what we tried to achieve to some degree [laughs].

Dead Rhetoric: I was going through your Facebook page, in terms of fan response, it seems like there was at least a section of the audience that seemed concerned that you had abandoned everything based on “Down on the Ropes.” Hearing the whole album is obviously different, but is that something you’ve had to deal with?

Tieken: I think everyone expected it to be like that. It is something very different. I think you can still hear the original sound in there, but it’s obvious that it is something people will have to get used to I guess. That’s a sacrifice we were willing to make. To address the fans, and to do something that really felt original. I guess most people expect a certain thing, and if we delivered that thing – we could have done that, but I don’t really think that’s what making music is about. It’s about trying new things and exploring further what you can do with your sound. We definitely expected some backlash, I guess. It’s not even that people are angry, but they are sort of worried or disappointed and they didn’t get it with the first single, and I understand that.

Dead Rhetoric: In terms of the sheer variety on the album, because there’s a big range of songs from the super heavy and groovy to ballads – what’s the approach to songwriting?

Westendorp: When we started out [writing], we had some brainstorming sessions and whatever felt good, we said yes. Everyone thought it felt good. Some nights it didn’t feel so good, so we had to really process the songs.

Tieken: It’s funny because it’s not even something that you set out to do – to make it as varied as possible. It just turned out that way. You write a riff or section of the song and feel that it works, but you say, ok this is different from the other things you wrote. But we rolled with it and saw where it took us. In the long run, me personally, I like to listen to records that keep me guessing and surprising me. If you do the same type of song 10 times over, the song won’t be interesting to listen to. So tried to keep people guessing and keep it fresh for as long as possible. Hopefully we did that [laughs].

Dead Rhetoric: You brought in a ton of talent in terms of producing the album – do you this release is a make-it or break-it type of release?

Westendorp: Yes, I think so. To be picked up by a big, awesome label – this is our time to shine. If we don’t make it right now, then people will be like, “Ok, well their time is done.” [laughs]

Tieken: We have Nuclear Blast behind it now, and of course there’s the whole production team that was working with us. There are so many people that have really stuck with us and put in a lot of effort. The production was a pretty big endeavor, so for everyone – let’s make it happen and try something fresh. We worked with Daniel Gibson and Robert Westerhold [Within Temptation] as well. We sound completely different from Within Temptation, but we got in touch with him really early in the songwriting process. He was really into trying to work with us on how to take it to the next level. We started brainstorming and doing songwriting sessions with him, and it really changed the whole perspective – changed the whole thing, and brought up what it is that we were about.

Dead Rhetoric: It seems like there has to be something behind the album title [The Sick, Dumb, and Happy]. Is there anything you can mention about it?

Westendorp: The album really revolves around the fact that we are becoming dumb and dumber I guess. The media feeds us all of this imagery of the perfect life that makes us blind to the real problems of the world. It’s a take on the typical, fat guys sits on his couch eating all day.

Tieken: It’s two things – the one side of it is people being happy with living a sort of hollow life and no one is doing anything but for their own benefit. The other side, you have these big corporations and media that are exploiting that thing. The bottom line, we have these major problems with the world, like global warming, that are completely ignored. How can that happen? How is it possible that it happens time and time again? Most of the songs are written from a sort of frustration with that. 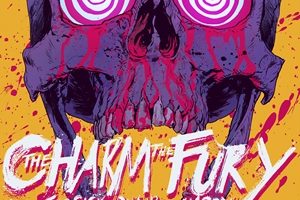