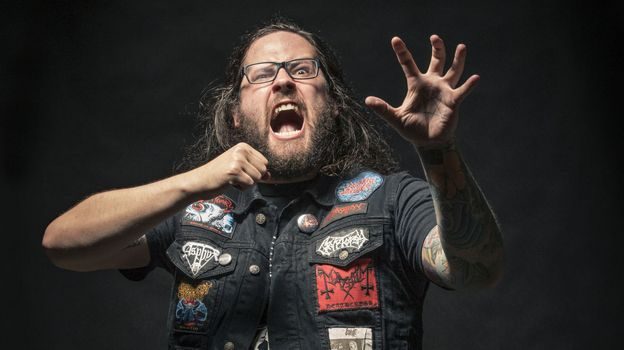 Dead Rhetoric: Moving onto merch – I loved that Detroit Rock City-esque t-shirt. What went into picking what was going to be on there?

Strnad: It was really about 5 minutes of thought. It was like, “Who is going to be chasing us?” I was like, alright – some guys from Metal Blade…we’ve got the higher ups from Metal Blade on there. We have Kyle and Jorel, the heads of the Blast Fiends in my eyes – the two most important figures in the fan club, so we put them on there as a tribute to them. Then I just rattled off some shit I thought would be funny to see together – Mega Man, King Hippo are in there. Candyman, some classic monsters. It’s an extension of our personalities. We’re a serious band, we approach the music seriously but there’s also this tongue and cheek personality we have as a band. We bring it to our videos and stuff like that to stand out. Making weird videos and having weird photos was just a necessary evil. We didn’t want to be seen at first. They would find out we are all nerds [laughs]!

Dead Rhetoric: So how important is merch? As you were saying, record sales are a bit more problematic. Do you have to work a bit harder to make sure that the merch is top-quality material that people will be excited to pick up?

Strnad: That’s the goal – to really entice people. Like you said, album sales are down overall, and we rely so much from the actual show. The payout from the show, the payout from the merch that is being sold in person. That’s where our real livelihood is. I love merch as a fan. I look at it from that kind of perspective too. I try to embody a lot of different kinds of designs for different walks of people. I realize that we have all different kinds of fans.

We’ve been called so many different kinds of genres. Every time we are on the Internet, there’s a ten page genre-fight in the comments to follow. Overall, it’s given us the ability to do so many different things that are outside of what you’d consider for a normal death metal band. Like playing Warped Tour for example. We went there as The Black Dahlia Murder. We didn’t compromise our sound or anything to go there. We showed up, we did our thing, and it was an attempt to get in front of a lot of different people. And it definitely worked – that is one of the first shows that your parents will allow you to go to as a young person. We have gotten in a lot of people’s ears, and we’ve been able to take risks like that. Being called all these different genres has empowered us in a way. We are able to fill rooms with people – all different kinds of people come to see us. I couldn’t be more thankful for that.

Dead Rhetoric: You always have your nose to the ground for new bands – do you find that people send you their music directly at this point to check out, in hopes that you will check it out?

Strnad: That’s been happening a bit more since I have been doing the column for Metal Injection every month. There’s lots of dudes popping up and showing me stuff. Then there’s guys that I look to online, that I have become friends with, who always have really great tips about music. I’m always open to suggestions. It’s cool to have that reputation. I enjoy helping expose bands – bands that I like that I don’t really see much press for. I felt there was such a hole in terms of what I wanted to see and read about myself. There’s a lot of bands out there and I just felt a responsibility. It’s also been good for the bands. To show them that I care. It’s more than just all about this band – the underground is what constantly grounds me, and constantly inspires me.

Dead Rhetoric: It’s that whole ‘metal as family’ aspect – you look out for each other and pass the word around.

Strnad: Yeah, instead of being just selfish and never saying another band’s name. I look at it the entirely opposite way. I try to use whatever high profile we have to spread the gospel. We have a platform to do so, and I feel a responsibility to do so.

Strnad: I think it’s really the same that it’s always been. It’s underground music. It’s adversarial. It’s irreligious. But at the same time, there’s so many sounds happening within death metal at any time. I enjoy that aspect too. You have old school bands that are out of tune on purpose, and record shitty sounding tapes on purpose to recapture that tape-trading era. Then there’s bands that are the tightest, cleanest, fastest, most physically Olympic thing going – to play a billion miles an hour. It’s always going in so many directions and I just love it. Whether or not it’s popular on a global scale or [just] in high schools, it’s always happening. It’ll never die, it’ll never go away.

Dead Rhetoric: You’ll be starting up a North American tour once the album comes out, and it’s yet another completely stacked package. How much pull did you have in determining the bands for this one?

Strnad: A lot actually. It came together really nicely. These are bands that I love, and am very proud to have assembled. It’s a huge honor to be playing with Suffocation, who are literally my first love in death metal. Pierced from Within was the first death metal album I bought. It scared the pants off of me. It had me convinced I was going to Hell but I liked it. It’s a huge honor to be with them. They have a new generation of dudes in the band – a lot of new players in the band, a lot of new energy. They sound great. I was really impressed with the new line-up. I came in just as skeptical as anyone else about Frank leaving, and it’s definitely sad, but the new guy really honors what Frank did and does a great job. It exceeded my expectations, and they are still having a good time right now. Even with these member changes right in the middle of the fold, I think their new record is really big and is doing a lot of great stuff. It’s really cool to team up with them.

Dead Rhetoric: Will it be nice to get away from the “play album X in its entirety” this time around and just feed into the new album?

Strnad: It’ll be cool to go back to the normally scheduled program of doing a best of set. We have three songs that will be debuted before the album launch, so I’d imagine that we will be playing those songs, at least, on the tour. All in all, it’ll be a best of set, and we’ll play for like an hour and fifteen minutes. We usually do about 18 songs – that’s a lot of Black Dahlia [laughs]!

Dead Rhetoric: There’s the new album and tour – what else can we expect from The Black Dahlia Murder in the near future?

Strnad: Right after the new year, we will be out in Europe. That’s exciting to be back over there. I can’t really divulge anything yet, but it’s a really cool line-up. Really, we are just getting started in formulating everything we are going to do. I think there will be another tour for the album in the spring for the States. But every album cycle is a rebirth. It’s a reason to get back out there. A reason for new merch – everything. It’s definitely exciting to get back into it again.