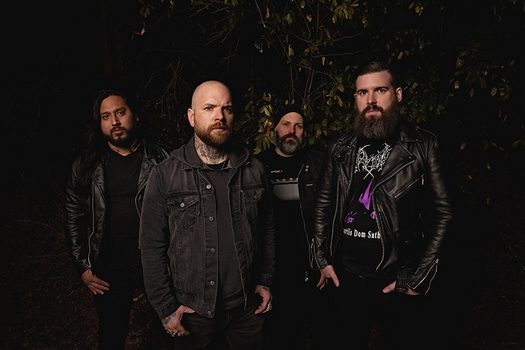 Coming up amid the metalcore movement of the early 2000s, The Agony Scene was not a band to stand around and offer the same album each time around. The three they released all offered some different takes on the American metal scene at the time, while having some consistent qualities that maintained who they were as a band. Whether it was the more traditional assault of the debut, the lean towards more hooks and melodies with The Darkest Red, or the raw, punk attitude of Get Damned, The Agony Scene continued to advance their formula. But in 2008, the band split up.

Following a reunion show a few years ago, the band got back together and began to restructure. The recently released Tormentor is the band’s first release in over ten years. It still contains elements of the band’s mid-2000s run, but advances the sound again, reaching into some more aggressive and even black metal-esque atmosphere into the mix. While on the road with The Summer Slaughter tour, we sat down with vocalist Mike Williams before the band’s show in Worcester to discuss their return (and new album), the religious connotations that hung over them, and what’s coming in their near future.

Dead Rhetoric: How do you feel that Tormentor captures The Agony Scene, circa 2018?

Mike Williams: We had all the time in the world to write it, which was cool. We played a reunion show in 2014, and while practicing for that, we inevitably started writing and fucking around with riffs. Four years later, we put out an album. We honed it in to where we thought we were at, musically, and banged out some throwback 2005 riffs and moved from that point to what we are sounding like at the moment. I think the only goal we had was to not make a throwback, mid-2000s metalcore record. We wanted a more mature, well-thought out batch of songs, and I think we managed to do that.

Dead Rhetoric: Definitely. That’s one of the things that I noticed was that it has the same kind of thing you were going for with Get Damned, but there’s a more modern side too.

Williams: I still like Get Damned, I’m so proud of that album. We had the luxury on this [Tormentor] of having a year and a half to write. We had time to think out our ideas. Get Damned was sort of written fairly quickly, and recorded very quickly. It was a ‘here it is’ type of thing. We definitely took our time and made sure that we put what was our best foot forward right now as far as where we are creatively. It’s also cool since we haven’t written music together since 2007, so we had fresh ears and new excitement for trying to write songs.

Dead Rhetoric: The band went through a lot of changes between 2003 and 2008. What do you remember about those times?

Williams: Being kids. We started touring when I was like, 19. We all sort of became adults on tour, which is a weird thing to do. You definitely get to know people in close quarters. Touring is a grind. This is the least glamorous thing in the world, at least at our level. We slept in our van last night between here [Worcester, MA] and NJ. Doing that at 34 isn’t any more fun than when I was 20. It’s not for everybody. Some people want to do other stuff. They meet the girl of their dreams – they want to get married and have kids. They want to go to college. I totally get not wanting to do it [laughs]. We cycled through people [in that time]. The core people that are creatively responsible for what we are doing are involved, and we have a rotating line-up of people who think it’s fun, until it’s not fun [laughs]. We haven’t toured in 11 years, so I’m definitely remembering the parts that I forgot about.

Doing it as an adult, is also a different and positive experience. We aren’t hemorrhaging cash on stupid shit or anything, like we may have done in the past. That period of time was a giant learning curve and hectic. We managed to get through it. We only broke up twice, so that’s not too bad. We broke up once between each album cycle, so we are in a better place now [laughs].

Dead Rhetoric: There was always a notion that The Agony Scene was a Christian band, due to starting off on Solid State Records. Do you think the band has finally moved past that notion?

Williams: It comes up – especially when releasing new stuff. We released a lyric video for “The Submissive” that bummed some people out that were still under the impression that we are a Christian band. It’s weird what people pay attention to, or choose not to pay attention to. It’s hard to shake that perception off. We get asked about it all the time. With Get Damned and this one, if you read the lyrics and absorb what it is, I would have a hard time understanding how it would still be a thought. But we are also from Oklahoma, and when everyone was starting bands in high school, there was a religious overtone to what everyone was doing since we were all raised in suburban Christian homes.

Everyone’s parents were cool with you being in a band as long as it was a Christian band [laughs]. That was the scene that we came from. That was the only means of playing shows when we started. In the very beginning, with the original singer and original members, there were religious overtones to the music but by the time we were doing the Solid State record, it wasn’t a thing. But Solid State definitely gives you that badge for life. So it comes up a little bit. I just think it’s people not paying attention to what we are saying/doing. We haven’t been a Christian band for a very long time.

Williams: Yeah, how many people can say that? The label Outerloop is essentially our management from before. They started a label, so it’s people that we have a huge history with. It’s very comfortable. We approached them with “Hey, we want to do another album” and they were very receptive to it, which was great since they are responsible for us being here. We were the first band they really managed, so there’s a special place in their hearts for us…to our benefit. I’m more on the side of being pleasantly surprised that anyone wants to put out an album by us. I’m happy to be here, more or less. I don’t get super picky. Anyone who is willing to let us do our thing is pretty cool. The joke I always make is, “How many people get signed to 3 big, substantial labels in their career?” Whatever that says about us, we have been on some notable shit!

Dead Rhetoric: How do you view the way that the band has changed over the years?

Williams: There’s never a plan ahead of time – we have never started writing a record and said, “We are going to make a ‘this.’” Its sort of whatever happens in the room. There were some periods where we definitely tried to adhere towards whatever the trends of our world at the time. On The Darkest Red, you can still hear us venturing into more of the singing stuff, but I like those songs and I liked the parts at the time. It was something I genuinely thought felt good. Even with Get Damned, where it took on more of a punk thing, that was where we were at then. Tormentor is creatively where we are at now. Whatever we put out has always been what we felt was our best shit at the time. Tormentor is probably the most mature, well-thought out stuff we have ever done.

I don’t know if it would bum people out if I say that this is our best album, but I can listen to the whole thing and just be excited and I’m happy certain parts came out a certain way or that some parts feel a certain way. I’m genuinely beside myself that we even get to do this. Three years ago I would never have thought this would have happened. I’m proud of the songs. I think we are in a ‘holding our head up high’ place right now. We did this thing, and its being well received for the most part. I’m very happy with the idea that we even got to make a fourth record.

Dead Rhetoric: So do you think that Summer Slaughter is a nice way to re-introduce the band?

Wiliams: I get a lot of “I can’t believe you are here” and “I started listening to you in elementary school,” which is my favorite. I feel like the oldest person on the planet. People are like, “I was 11 years old when I got your record from my brother.” But hey, I’m 34 so I’m not that old. We have this weird thing that we were around when we were like 19-20 and that was over 10 years ago now. We are essentially peers with everyone on this, but we just existed before them. I’m always happy anyone likes anything that we do. The crowds have been good so far. We aren’t on the technical side, so I think we fit nicely in the middle since we are a more straight forward band between more tech-death stuff. It makes us stand out, which is nice.

The response has been good, and this might surprise you, but we used to do really well on the west [coast]. Having good shows on the east coast has been a pretty cool thing for us. This is the best response we’ve had in this area of the country ever. I think this has been a good thing to get our feet wet. There’s plans in the works to do more after this, so I think shaking the rust off with this tour with a bunch of really great bands and sit in the middle with a good time slot has been really good for us.

Dead Rhetoric: So what plans do you have once this tour is over?

Williams: There’s a few tours that we have been talking about, or we are talking about doing a headlining situation where we play small rooms and take out a few other bands. We have 25 minutes here every night, so after the show there has been a lot of “Hey, I wish you would have played this song or that song” so it would be cool to play a show for like 45 minutes where we can play a more varied set with older stuff. We are trying to push the new album, and make people happy at the same time and it’s tough with 25 minutes. So we are leaning towards a headlining tour where we can play a more career-spanning set, so people don’t feel bummed out that we didn’t play a certain song.

I think Europe is also in the near future. We are just trying to see where the interest lies. After this, we will go home and regroup. We have an October show in Austin, Texas with Bleeding Through, and the plan is to do a full tour cycle for this album and we are already starting to write some newer stuff to keep things going. I think the model for doing a record every 2-3 years isn’t a thing anymore. People have to have to continue to generate content now. It’s a different world now than when we left it, so we are trying to figure it all out. 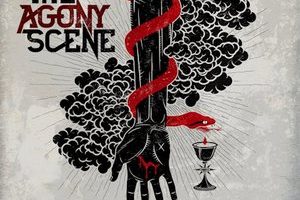