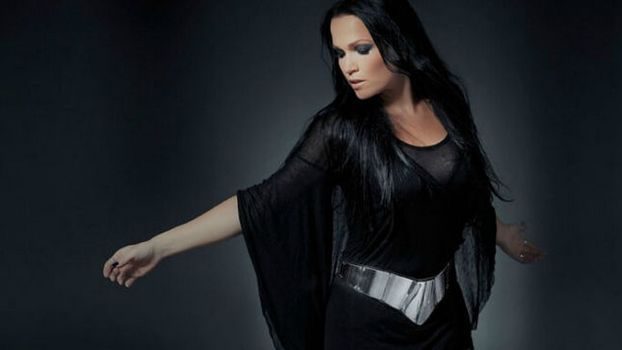 Dead Rhetoric: There’s also a [graphic] novel coming out with the album. Where’d the idea come from for that?

Turunen: That I have to say came from my record label, earMUSIC. I never even thought of myself doing anything like that. I was very happy when they brought this up to me. They introduced me to several artists and I chose my favorite one, Conor Boyle. I felt like his drawings were more emotional than the others they showed me. It was very interesting, because the novel is based on my song “Together.” It’s just a short graphic novel based on the lyrics. Conor felt my lyrics. I never explained anything about my lyrics. I wanted him to make his own mind up about it and give his interpretation.

I want the same thing to happen when people listen to my songs in general. I don’t want to deeply explain my lyrics because it’s kind of sad. It’s happened to me where I am thinking something about a song and then the artist comes along and explains it and it was something else completely different. The song has a different meaning then. You listen to it differently after that. It was nice to work on the graphic novel and have something completely different come out of the album.

Dead Rhetoric: Obviously you had a career with Nightwish before your solo career. What do you feel is the biggest difference in playing in a band versus working solo?

Turunen: There’s a difference in everything. My experience in a band was that I wrote vocals and took care of my recordings, and performed the songs. But they were not my songs. I was taking care of press and sharing that with Tuomas [Holopainen], but that was about it. I was not making any decisions. Nowadays, I am taking all the responsibilities and carrying them on my shoulders. I’m doing everything. From the first note until I have a finished product in my hand, plus all the touring. Everything is going through my fingers. It’s a lot of work; it’s a 24/7 job but I do enjoy it completely. I didn’t even know after my career with Nightwish ended if I would be able to do it. I didn’t know what it consisted of –writing songs, producing records, going on tour, singing for your own audience, getting the musicians on board for who you want to work with, finding a label. Everything was so different. Of course, the work that I did with the band gave me that opportunity to work on my own. I didn’t have to start from scratch, that’s for sure. But I really needed to take those baby steps as an artist.

Dead Rhetoric: So would you say there was a big learning curve when you first started out on your own?

Turunen: Really huge – if I think back to when I was working on my first record, whoa, I was nervous. Writing songs for the first time, and trying to get people to came on board…first of all I needed to find the people I wanted to work with, then when I found them, or thought I found the correct people, I had to make them understand what I wanted and how I wanted it. It was such a great time, in a sense, that taught me a lot. For the next record, I wanted to produce it on my own. I had the team ready and working. After all these years, I still have many of the same musicians that were working with me in the band still, and going on tour with me. It’s amazing. Good people, they stay with you for life.

Dead Rhetoric: What are your thoughts on the similarities between classical music and heavy metal?

Turunen: There are plenty of similarities, even though you might think, “Oh lord, how are there any similarities?” I’ve been dwelling in these two worlds for so long. If you think about it, symphonic orchestra for example, playing some Tchaikovsky or even some Puccini at times, it can be so mind-blowingly loud. Way louder than a heavy metal band can be, with the amplification and everything. It can be so powerful and majestic and bombastic at the same time, Wagner for example. Wagner was the father of heavy metal I can say [laughs]. The dark melodies, even the melancholy, [Jean] Sibelius, Finland’s musical father, he was writing his works with a lot of melancholy. Also, opera has the stories of love and death. It’s always something dramatic happening in opera. Also in metal, the lyrics are so emotional. We can talk about everything. We can be dramatic, be crazy, and be open in our lyrics. That’s very similar to classical music. For me, music is emotion. I find emotion in classical music. I find a lot of emotion in metal, it’s beautiful.

For me, it’s been such a pleasure to be able to do [varied] concerts. In Wacken Open Air last year, I was having my rock concert in the festival side, but before the festival, on day one, they invited me to sing in the church. The Wacken village church; it was a small church, but only a metal audience. Everyone was dressed in black. Everyone heard me sing with a string quartet, doing metal songs acoustically. I sang my own songs; I even sang them some “Ave Maria,” and some other classical pieces. So I mixed the classical and metal songs together, done in an acoustic way. The promoters for Wacken broadcast it for the audience before my metal show, for the 80,000 people outside in the field. It was unbelievable, to listen to myself singing classical before I entered the stage with my metal band. Listening to all of the feeling that 80,000 people gave me when they heard/saw me on these gigantic screens singing classical music, right before I went and rocked with them.

It was the perfect situation for me, to show what I do in my life and let people really get it in a clear way. After that church concert, people told me it was one of the most beautiful things they had heard in their whole life. Being metalheads, purely metalheads…that’s what I’m saying with music is emotion. There are no borders for me in that sense. If I am into something and feeling it, I go and do it in the best way possible. Just go and listen, and enjoy music [laughs].

Dead Rhetoric: What plans do you have for next year at this point?

Turunen: This year, I will hit the stages of South America for my last album, The Shadow Self. Then soon after that, I will start with my classical tours for the end of the year. The last concert is December 21. After that, we will spend Christmas in New York with my family for the first time. When it gets cold, we don’t go to Finland, but we go to New York to get refreshed. In January I will start working on a DVD release called Act II. It was shot and filmed in Milano last year. It will be released, hopefully in the beginning of June or end of May internationally.

I’m also writing for a new rock record, little by little, writing some material and playing some shows with the band already next year. There will be festivals in Europe, and then there will be ProgPower in the US. We are working on a tour around that date, and I’m really having high hopes that my fans in the US will see me, goddammit. It’s been so many years since I’ve been there so I’m super happy that this festival is happening so I can see all you guys over there.