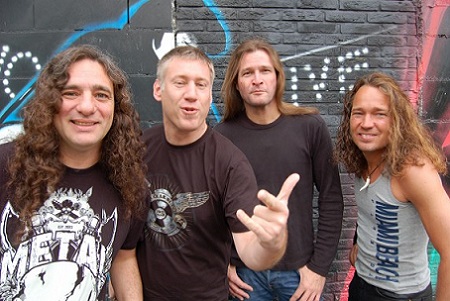 Dead Rhetoric: My favorite is “Breakfast for Champions.”

Geremia: That’s another funny one. “War Cry” is about sitting at the computer and flying drones somewhere and sometimes innocent people are dying. “Hope Can’t Die” is about a very good friend of mine who died two years ago. The lyrics are more in general, but all of the feelings you have: Anger, sadness…we tried to help him on the other side. It’s still my favorite song on the album. It’s not typical thrash metal, it’s more mid-tempo style. The hook lines of the chorus are good. We have another good mixture on this album. Have you seen the video for “R.I.B.”?

Dead Rhetoric: I have.

Geremia: It was our first time working with this guy on the video, but we had a great Sunday, and the fan club came.

Geremia: No. [laughs] Only on that day. We had a lot of fun and it was really amazing.

Dead Rhetoric: You had the two-guitar setup for so long and now Andy [Gutjahr] is the only guitarist in the band. Some of his work on the new album shouldn’t go unnoticed – he’s quite the tasteful player. How nice is it having someone like him around?

Geremia: We decided when Axel [Katzmann] left the band in 1994, we would go on with four members. We have a really heavy bass sound when we play live, so we don’t need another guitarist. He wrote most of the stuff for the album and did another great job and we’re really lucky to have. The normal working process is that I get a CD with a lot of guitar parts and Andy has an idea of how the structure of the song, then I try to find some melody lines for the vocals. When I found some stuff and we meet at his place, then we record and decide which we can use and which parts we can kick out.

Dead Rhetoric: Are you ever going to run out fun and/or comedic ideas in which to sing about?

Geremia: No! [laughs] We will always have funny ideas for lyrics and 32 years are over, so we’re looking toward the next 32.

Dead Rhetoric: You’ve been around for 32 years and have released 16 albums, right?

Geremia: That is correct. At the moment, we bring out every two years an album. It’s not really a law or something like that, but it happens. We don’t know what will happen in the next two or three years, but we still have a lot of great and funny ideas. For example, “Fooled By Your Guts,” we saw this story on the internet about this guy in the United States that his stomach was producing alcohol, so he was always really drunk and people thought he had a problem, but it really was a disease. When we read that, it’s like, “Wow, that’s a story for Tankard!”

Dead Rhetoric: Beer in the States, has become this thing where people are really particular about what they drink, like with the style and taste. What do you think about that with beer enjoying such popularity?

Geremia: This is the only meaning of Tankard: Traveling all over the world and tasting the different beers. [laughs] We still like to drink a couple of beers…a lot of journalists ask me what is my favorite and I always answer: “My favorite beer is the one we get in the back stage room for free.” [laughs] In Baltimore, I don’t know what kind of beer we drank, but it was great.

Dead Rhetoric: Did you enjoy your trip to the States?

Geremia: Yeah. It was a little difficult because we needed working permission, but we got them two days before we left. [laughs] You can’t come in as a tourist with a guitar in their hands. That happened to a few bands and they sent them back. We had a really great time and I think the reaction were really quite good when we played. Later on I saw Dark Angel and they really kicked ass.

Dead Rhetoric: You’re part of the “Teutonic Four” with Destruction, Sodom, and Kreator. That’s quite the big honor, so how does it make you feel?

Geremia: Of course we know each of those bands for a very long time. We’ve played with Sodom a lot, they fit together with us – they have same kind of humor as we. Ten years ago, everyone was thinking about the “Big 3” and now we are one of the Teutonic Four and that makes us a little proud of course. Last year, we played the Beastival Festival, the very first time together, all four bands.

Dead Rhetoric: You go way back with all of those bands.

Geremia: We played together with Sodom in ‘84 and it was their first show ever. We’ve known them since their first days. Destruction – it wasn’t an official show – they played a couple of songs the first time live and I was there. 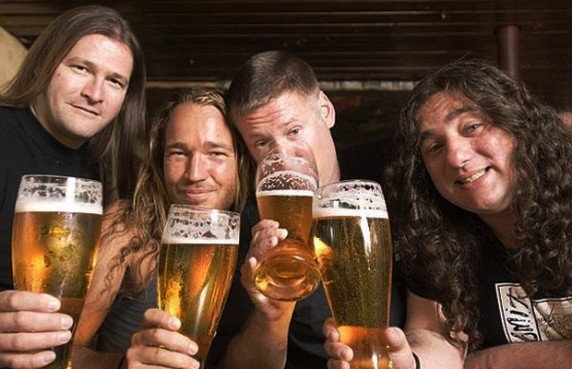