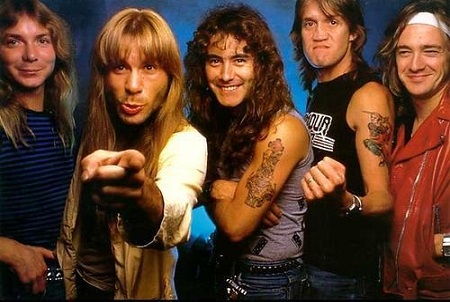 Like many of metal’s classic bands, the history of Iron Maiden is a complex and foreboding one. While many choose to focus solely on the Dickinson glory days of the 80’s, the band’s Di’anno-fronted era, subsequent decline in the early 90’s, near-disastrous plunge during the rest of the 90’s, and eventual rise in the early 00’s are frequent topics of debate. Granted, no one is going to outright admit they prefer the anguished Blaze Bayley years over Piece of Mind or Powerslave, but Maiden wouldn’t be the biggest metal band in the world today if they didn’t suffer through some lean years. (And for the record, there are some good jams on Virtual XI.)

British author Neil Daniels is the latest writer to put his spin on the career of Iron Maiden with his excellent book, Iron Maiden: The Ultimate Unauthorized History of the Beast (Voyageur Press; click here to order). Jam-packed with eye-catching photos and dead-on assessments of the band’s catalog, The Ultimate Unauthorized History of the Beast is an easy read, giving the reader a very high-level overview of all-things Maiden, while not getting hung up on the minute details. Daniels’ exhaustive research includes a virtual smorgasbord of internet clippings and insight, while tour dates, setlists, and various photos take one for a trip down memory lane…and elicit heapings of jealously for those who were too young to experience it all.

We caught up with Daniels to discuss the various ins-and-outs of Maiden, and as you’ll find below, the author certainly has some varying opinions compared to what this scribe thinks of Maiden’s career. We should schedule some type of debate or something…

Blistering.com: You’ve written several rock-related books, including one on Judas Priest. What made you want to tackle Iron Maiden?

Neil Daniels: It’s part of a series of heavyweight hardback’s on major rock bands. My Maiden one follows illustrated tomes on AC/DC, Queen, and Aerosmith. It’s a potted history of the band, with reviews from fellow rock scribes like Mick Wall, Martin Popoff, Ian Christe and John Tucker et al, as well as tour dates, setlists and various fresh articles written by me and others for the book. The graphics are amazing. It’s a real fans book but casual fans should dig it too. The publishers approached Derek Riggs for the cover design and I was thrilled he designed the book cover. I mean, what could be better for a book cover on Iron Maiden? It looks great! I’ve had a few reviews in so far and they’ve been great. Really good. So basically, I liked the previous books in the series and pitched the idea to the publisher and it was given the go-ahead. I’m really pleased to have written books on Priest and Maiden.

Blistering.com: Describe the time you put in getting quotes, talking to sources, acquiring photos, etc.

Daniels: In terms of the photos, that’s usually always down to the publisher, certainly for the Maiden book as there are over 500 of them. For some of the others like Metallica, I knew a few photographers like Brian Rademacher. I usually create a timeline and build my research into it and gradually see it get bigger and bigger until I reach the word count. Then I re-draft. I use first-hand interviews as well as secondary research. It’s good to have a balance.

Blistering.com: Obviously, Maiden has quite the illustrious past. What period of the band was most fascinating to you, and why?

Daniels: I think the post Dickinson reunion era (i.e. now) is simply wonderful. The band have gone from strength to strength both in the studio and onstage, taking risks and challenging themselves and their fans. Obviously I have a love for the early Dickinson stuff too especially Piece of Mind and Seventh Son.

Blistering.com: Do you think an album like Somewhere in Time never got its just due? I say that because it’s sandwiched between Powerslave and Seventh Son, and plus, some people still have gripes with the guitar synthesizers…

Daniels: I think Somewhere in Time has its strengths despite the dubious reaction it got back in 1986 and still gets today from some fans. I like the fact that Maiden are not willing to stick to an agenda yet whatever they do still sounds like Maiden. I think Judas Priest could learn a thing or two from Maiden.

Blistering.com: How big of a blow was Adrian Smith’s departure in 1989? Do you think No Prayer for the Dying would have come out better had he still been in the band?

Daniels: It was a big blow indeed and Smith is obviously an integral element in the band’s iconic sound so when he rejoined in 1999 with Dickinson the band have since made some of the best music of their career. I think No Prayer has its flaws but I’ve always loved the fact that Maiden approaches each album with a different agenda even though some of the Maiden zealots don’t always agree. But the sound isn’t that great on No Prayer and the guitars don’t come across as prominently plus the songwriting is pretty lax.

Blistering.com: To that point, how did you view Smith’s role in the band? He seemed to be able to strike the right songwriting balance with Harris, after all.

Daniels: Exactly and I think the reason why – as I mention above – the songwriting on No Prayer is poor is because it misses Smith. He’s only credited on “Hooks In You.” The same can be said of the Blaze Bayley albums – the trio of Smith, Dickinson and Harris is what makes Maiden work.

Blistering.com: When watching live footage of Dickinson around ’92/’93 on the Fear of the Dark tour, what sort of thoughts spring to mind?

Daniels: They were amazing onstage and if you watch the Donington footage and listen to the Live At Donington album they were on fire but there’s also a feeling that they were maybe jaded and a tad fed up of each other. It’s funny how Priest and Maiden’s careers in the 1990s kind of mirror each other. They needed the break to truly appreciate the chemistry they have as a band.

Blistering.com: When Bruce put out Chemical Wedding in ’98, do you think that made Harris and co. really stand up and take notice of what he was doing?

Daniels: Probably – it would be hard not to. Maybe Harris didn’t make a concerted effort to listen to Chemical Wedding but he would have known what Dickinson was up to ditto Tipton/Downing with Halford. After all, they were competing with each other.

Blistering.com: Some may want to overlook the Blaze years entirely, but the band has done a good job of incorporating some of the songs from his era into the live set. What do you think Bayley’s lasting legacy will be?

Daniels: I think fans have largely shunned this era and chosen to forget about it so it’s kinda of like “the dark years” of the band. Ticket sales were low, albums sales were poor, reviews weren’t great. Since Brave New World, the band has become huge again. That period with Blaze needed to happen because like I said before Dickinson and Harris obviously needed to have a break from each other, and in the long run it’s work out well.

Blistering.com: Paul Di’anno has repeatedly bagged on his time in Maiden, yet he tours almost annually playing Maiden songs from his era. Do you see any sort of irony in this?

Daniels: Yes, there is irony but also the guy needs to make a living somehow. Look at the ex members of AC/DC, Wishbone Ash, Saxon, Judas Priest etc., etc – it’s not easy making a living doing something you love in this day and age. I can understand it in that sense but yeah, Di’anno could choose his words more wisely when talking about Maiden.

Blistering.com: Obviously, the band is nearing the end of its career, so what do you think the right way to go out would be? One last studio album? Or a proper “farewell” tour?

Daniels: The Final Frontier is kind of a scary title isn’t it? Is it really the end after 15 albums? I dunno. Maybe they will call it quits or maybe they’ll surprise us and carry on making music and touring. Or will they go out on top – a huge tour like you said. The Final Frontier is a fine album; a great album to end an amazing career. But bands are so unpredictable that there’s no point on theorising until the band issue a statement telling us of their plans.

Blistering.com: What type of projects are you currently working?

Daniels: Yes, I’ve got a little book out in August on You Me At Six, a British pop-punk band, and then I have five books out next year including a second one on Bon Jovi and a fictional rock novel. It’s too early to announce the others yet other than to say they’re bios of major hard rock/metal bands. You can read about my up coming stuff nearer the time atneildanielsbooks.wordpress.com.

Daniels: I’ve got a book out now on the early years of Metallica. I’ve actually wanted to do this for a while but it was only recently that I found an interested publisher: Martin Roach at Independent Music Press. I worked with Martin before when he hired me to write a bio of Robert Plant back in 2007. He was really keen on the idea of a book on Metallica. Given that the band’s best work is undoubtedly their first four albums – possibly the fifth in some fans eyes – and that they’ve recently celebrated their 30th anniversary it seemed like a no brainer. When metal fans talk about Metallica’s best albums they usually mention Kill ‘Em All, Ride the Lightning, Master of Puppets and …And Justice For All. It’s been getting some great reviews so far so I hope Metallica fans dig it. Check out neildanielsbooks.wordpress.com for updates.