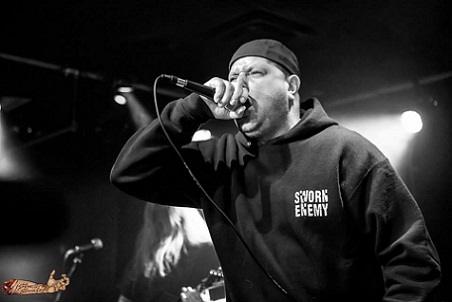 Dead Rhetoric: You’re on a new label with Rock Ridge. I hadn’t heard of them prior to you guys signing with them. What can you tell me about them?

Lococo: I really don’t know much about Rock Ridge. The only thing I can tell you about them is that they stepped forward and said they wanted to sign us. That was all I needed to know. Somebody was interested in the band. Let’s go with it. No one else was biting at our doorsteps, you know? So we went with it.

Dead Rhetoric: Is the title, Living on Borrowed Time, and the album cover symbolic of what the band has gone through?

Lococo: Of course. A lot of people thought the band was dead. I thought the band was dead, so right now, I’m getting a second chance. I couldn’t have come up with a better title. I’m living on borrowed time right now. The band shouldn’t even still be going – it’s going strong. We put out another record, we have management, we have tours coming up, and everything a band is supposed to have. After 2009, we shouldn’t have any of this.

Dead Rhetoric: After 2009, considering how things were at the time, did you consider starting a brand new band?

Lococo: I didn’t want to start nothing new. That would be a new phase…it would be tough. I was like, “This is it. It’s hit or miss for me.” If I can’t do Sworn Enemy, then I can’t do it.

Dead Rhetoric: Did the new guys need any warming up to the Sworn Enemy style?

Lococo: You know what it was? Since we started doing the weekend thing, started doing a lot of shows, they started getting used to the Sworn Enemy style. They both listen to heavy music anyway. Jeff loves metal. Matt loves hardcore, so we were able to gel as a band. We were all new to each other, so it took a little time, but it worked out. The final product in my opinion, is fantastic.

Dead Rhetoric: You put out As Real As It Gets on a major (Elektra) back in 2003. Has your perspective changed on those times at all?

Lococo: Of course it has. At that time, we were all green. Nobody knew the deal. We thought being on Elektra was the be-all, end-all. In a sense, we did make it, but we really didn’t make it. Making it, is like Slayer, and when we got signed to Elektra, I was happier than a pig in shit. After being on Stillborn with Jamey[Jasta] and getting signed to Elektra, after Hatebreed got signed to Universal 2002, then we got signed to Elektra in 2003, I was like, “Holy shit, this is great!” At the beginning, it seemed like it was going to be really awesome. The man behind it, passed away around that time, Lou “Boulder” Richards. He was our manager, and he also played with Hatebreed, and got us that deal. I feel if he didn’t pass, it he would have gotten us to that next level. Him passing had a lot to do it. Plus, we had a lot of bad moments in the band which set the tone for a lot of things.

Dead Rhetoric: I’m curious: All the rules and regulations that apply to the hardcore scene – just as they do with the metal scene – did they start to wear on you after a while?

Dead Rhetoric: How do you think that came to be?