Swallow the Sun – The Mourning Has Come 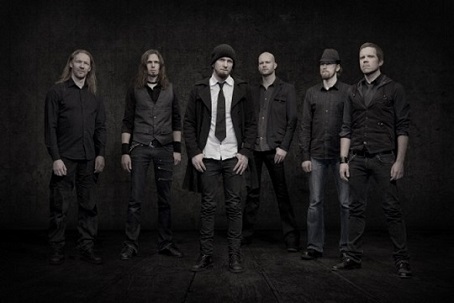 Weird that record labels still do this considering how rampant downloading is, but Swallow the Sun’s new Emerald Forest and the Blackbird is receiving a North American release a full nine months after the European release. Nine months. You know what can happen in nine months? And isn’t that generally how long most pregnancy’s last? Blistering may never quite understand the rationale for spacing out release dates; you’d think that in order to curb downloading, releasing it all at once would be the way to go, but we won’t question the guys calling the shots.

If the September release of Emerald Forest did anything for the heralded Finnish doom masters, it gave them something timely to plug on their current North American trek with Accept and Kreator. Obviously, Swallow the Sun doesn’t fit on this bill, but according to keyboardist Aleksi Munter, the band welcomes the challenge of playing in front of audiences who in most cases, are unaccustomed to their brand of melodic and progressive doom. What the Fins do have working for them is a sterling back catalog [2003’s The Mourning Never Came is a near-classic] and the benefit of several runs through our fine country. Therefore, in the face of the old and not-so discerning guard, Swallow the Sun should manage just fine.

Munter was kind enough to phone Blistering during a stop in New York to discuss the tour, new album, and why he always has a scowl on his face when playing live. You’d make the same faces if you were in Swallow the Sun…

Blistering.com: This is an interesting pairing, you, Kreator, and Accept. How are you guys stacking up so far?

Alesksi Munter: We’ve done tours before where it hasn’t been the same type of metal and we’ve found them to be good for finding new audiences. We’ve gone out with Finntroll and it wasn’t totally about the folk metal thing and there a shitload of people coming to see Finntroll, but then coming to our shows.

Blistering.com: Right now, the Katatonia, Devin Townsend, and Paradise Lost tour is happening in America, and you’d figure Swallow the Sun would be a dead-ringer for the bill.

Munter: Oh yeah. We’ve gone out several times with Katatonia over the last several years, but it’s cool to go out with someone else. We’ve love those guys, though. I think we’ve played close to 100 shows with Katatonia [laughs].

Blistering.com: With this tour, you’re probably only getting 30 minutes or so. What are you doing for the set? Sticking with the heavier material?

Munter: We’re pretty good with making setlists based on these type of tours, but we’ve decided to not to select the songs we play based on tours like this. We’re not going to be pretending to be faster

than what we are. We are opening with the first song off the new album [“Emerald Forest and the Blackbird”] I think that is something people will, or something they won’t get, but at least it’s honest to our sound. We’ve just want to sound as much as the album as possible. We have the backing tracks, so we can speed up some of the songs, though.

Blistering.com: You’ve never shied away from coming here, either. It’s not easy for Finnish bands or any European band for that matter. What’s the attraction to this market for you guys?

Munter: We’ve always liked it here. I think with this type of music, it’s important to go around. We really love touring; it’s what keeps us going. With this type of metal music, we can’t just do Europe. We want to go everywhere.

Blistering.com: Any place that you’re particularly fond of?

Munter: My girlfriend lives in Detroit [laughs]. I think everyone loves New York. We’ve always had good times in Boston, too.

Blistering.com: How did you end up with someone who lives in Detroit? It must be hard since you’re in Finland…

Munter: Nah, nah – it’s good. We met through a mutual friend at a show. We just hit it off [laughs].

Blistering.com: As for Emerald Forest and the Blackbird, I think it’s quite evident that this is your most progressive album to date. The songs are long and evolved and they certainly aren’t straight-doom. What were your initial thoughts when putting them together?

Munter: For me, I personally think for my keyboards, this was the most difficult album to make. The songs are so long, so I really had some trouble finding the right approach for the key lines. When we finished it…for example, I hated “April 14th” as a demo. I thought we should have left it off [laughs]. When we recorded it, it turned out fantastic. It’s one of my favorites from the album. It was a really difficult album that turned out to be really rewarding.
Blistering.com: With the new album, I think the proper reference point would be the Plague of Butterflies EP from a few years. That helped spawned this new direction, I would think. Do you see it that way?

Munter: Yeah. On the first three albums, we were cautious how they sounded, like “These are the things Swallow the Sun should do.” But on Plagues of Butterflies, we incorporated black metal-ish things…it pointed us and was where we started expanding our sound. I think on the new album, I really like how we sound. I think you’re right – we started it on Plague of Butterflies and have carried it over with this album.

Blistering.com: Plus, Mikko’s [Kotamäk] clean vocals have really come along. They’re one of the best aspects of your sound.

Munter: Yeah, yeah! He’s definitely grown in that department. I’ve known the guy for like 15 years. We were in a band together before, and he’s never done any clean vocals before, so it’s something new for him.

Blistering.com: “Cathedral Walls” is another song that stands out and has female vocals, which I believe are from Nightwish’s Anette [Olzon]. How did you guys end up hooking up with her?

Munter: We’ve always had some type of female vocals on previous albums, but we were looking and thinking of who to do it. We wanted something different. Juha [Raivio, guitars] stumbled upon Anette’s personal Myspace page and her old songs were up, and one of them she sang in the voice we liked, which she ended up using on “Cathedral Walls.” It’s not what she normally does in Nightwish, so we thought they’d fit perfectly. I didn’t know what to expect. She recorded her parts in Sweden, so when she sent them over, I was like “Oh damn, they work!”

Blistering.com: Your ascension has been gradual. You’ve put in quite a lot of work since the debut, and it’s not like you blew up overnight. What can you attribute it to?

Munter: We all have been playing in different bands since we were kids. I don’t know what I’d be doing if I didn’t do music. We are usually relaxed about everything, but albums, we always go every detail to the extreme. It’s important for us to do our best. It would feel like cheating if we didn’t do our best and didn’t take it as far as we could. We are thinking of doing something around the 10th anniversary of the debut. We will do something next year.

Blistering.com: You almost have to.

Munter: When we do know and we’ll let you know [laughs].

Blistering.com: And another thing with that, is your lineup with the exception of Kai, has remained intact.

Munter: We’ve known him since, forever. He played on our first U.S. tour in 2007 because our drummer back then couldn’t. He doesn’t feel like the “new” guy…he feels like the right guy [laughs].

Blistering.com: Any specific recollections from when you were puttingThe Mourning Never Came together?

Munter: Back then, I remember I wasn’t even into our type of stuff [laughs]. I was into faster stuff, so I was like, “Yeah, yeah, I’ll play with you guys!” I remember recording our first demo, I think that was the point when we were all listening was when realized we had something special. That’s when it became a natural band; when we heard what we had done. It helped us realize what we were going to do.

Blistering.com: You’ve done some guest spots in the past, including some live work with Insomnium and studio work with Ghost Brigade. Do you normally make yourself available to do guest work?

Munter: I really love working with arrangements and stuff. I’m a really slow composter, but I can do arrangements. If someone like Insomnium calls, we’ve known each other for so long and they’re personal friends. Of course I’ll do it for them. If it’s someone else, I might be open for some sessions. It’s more of a timing issue, than an interest issue. I love working with music; any kind of music and I’m always interested in having new experiences.

Blistering.com: Is there anyone you’re really interested in working with?

Munter: I would love to work with Katatonia. I think with Frank Default, he’s doing a marvelous job.

Blistering.com: He’s like the sixth member of the band now.

Munter: On their new album [Dead End Kings] he’s really prominent. He did such a good fucking job.

Blistering.com: I’ve seen you a few times live and I’ve always wondered: Why do you have such an angry look at your face while playing the keyboards?

Munter: I don’t know [laughs]. Our music is sometimes ridiculously serious, so being all smiley and serious onstage wouldn’t fit the mood.