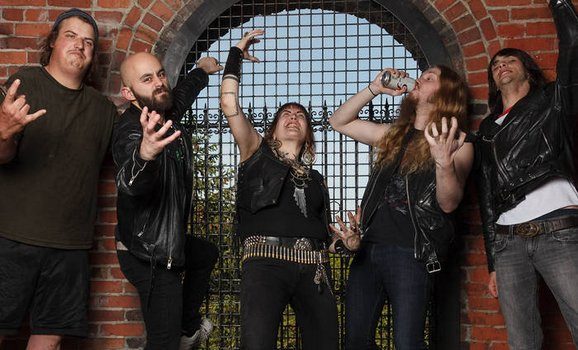 Dead Rhetoric: Substratum has been very fortunate to play on some killer bills with legends like Grim Reaper, Riot, Loudness, Satan, and Primal Fear among others beyond strong local shows. How would you describe the outlook of the band when it comes to live performances, and what types of reactions do you get from the crowd? What have been some of your favorite moments on the live front?

AC: Sword wielding babehammer over here, ahem. We want to see people banging their heads and pumping their fists. I want to feel powerful, and I want you to feel powerful with me. As a front woman, all eyes are on me. When it’s time for a solo I’ll take a step back and let Jonny or Max shine. When it’s time for the chorus, my fist is in the air. When there’s a break down, I’m banging my head. I’ve jumped into the crowd a few times, I’ve fended off hecklers. My sword is mighty, my voice is loud, ha ha ha- I’m fearless, and I want you to know it.

JH: We like to overperform. We’re not here to impress people, I like to feel the music.

AC: Absolutely- we want you to feel what we feel, if we’re pumped we want you pumped- when we say we’re not here to impress people, it’s because we’re just like you. We’re here to have a good time, we want to do what makes us feel good, and we hope you feel that way too.

LS: Rather see a sea of hair flying than a mosh pit any day.

ES: Our outlook is to play uplifting, exciting and bad fucking ass metal to blow your speakers. We have built an underground following, and had many insane shows from Seattle to Eugene. Our purpose is to keep rock and roll and heavy metal alive and strong in this dystopian wasteland.

Dead Rhetoric: How much importance do you place on social media platforms like Bandcamp, Facebook, and Instagram to communicate and elevate the profile of Substratum, and do you balance your own use of instant technology in building relationships with face to face, personal interaction?

AC: To be honest, we’ve really utilized our ties to the local scenes here in Seattle and Portland to lift us up in these last two years. Through our connections and our drive to play the best shows that we can, we’ve managed to build a really strong support with venues and promoters that share our enthusiasm. I am all about shaking hands, writing down emails, following up with friend requests and making sure that our conversation at the merch table isn’t forgotten. Facebook Messenger has been integral in allowing us to stay connected to some of those folks, it’s fast and convenient- Instagram and the whole hashtag thing has been pretty tricky but the idea of uploading moments as they happen is enticing. Facebook promotion is 50/50- I would still rather promote via word of mouth, but I guess this platform is quickly replacing that. Hand to hand? Thumb to thumb? Bandcamp has been phenomenal, the fact that we can promote and sell a demo in a digital format to people across the globe is exciting as all hell. We’ve gotten some exciting and wonderfully critical (and positive) reviews lately and it’s been energizing to see so much excitement brewing over what’ve we’ve been up to.

Dead Rhetoric: What are your five favorite metal albums of all time – as well as your best concert experiences that you’ve had from purely a fan perspective?

AC: Rust in Peace by Megadeth. …And nothing else matters (that’s a really bad Metallica joke.).

Dead Rhetoric: What types of hobbies/activities do you like to pursue away from music when you have the free time to do them? And how do your families/co-workers feel about your metal endeavors – do you have support from both?

AC: Well, Jonny, Eric and I are pretty fond of getting outdoors. It’s easy living here in the Pacific Northwest, a challenging hike is an hour’s drive from the city. Max and Lane are huge football fans, Seahawks and Huskies especially. I’ve been making jewelry from wire and bones for quite a few years now. I enjoy working with leather, belts and bags mostly. It goes hand in hand with my stage personality and personal aesthetic – bullets, studs, spikes and the like.

All of our hobbies come back to music in the end though, we all have side projects and other endeavors that we pursue outside of Substratum that we thoroughly enjoy. I don’t think we’d be the band that we are if we didn’t follow our musical interests to the fullest. We are passionate about what we do and that’s what ultimately brings us together. Jonny is in a Scorpions tribute band, Lane is playing bass in Skelator and comes from a death/black metal background, Eric and Max are starting a blackened thrash band. I’ve been playing guitar and touring as a folk singer for the last 12 years and will continue to do so. I sang briefly for an all-female heavy metal tribute band called Iron Nightingale (they’re still active by the way).

Dead Rhetoric: Has work begun on the follow up release – if so what can we expect in terms of songwriting and substance? Where do you see Substratum going over the next twelve months – will there be more appearances outside of the Northwest either in a mini-tour or festival capacity? Are there hopes as well for a conceptual video down the line?

AC: As we’re answering these questions for you now, we can happily say we’ve just wrapped recording our sophomore effort. You can expect a much more straight to the point, classic approach to heavy metal, thanks to Max’s songwriting and Amy’s lyrics which haven’t been showcased until now. You can look forward to some hard rockers with a lot of attitude and real driving riffs. Catchy choruses and maybe even an anthem or two. We would compare the shift to pulling a British Steel (laughs)- we want to come out swinging. We’ve had this whole time since reforming the band to put all of this together, reshaping ourselves and shifting gears if you will. You’ll be seeing us at Reggie’s in Chicago at Legions of Metal (formerly known as Ragnarokkr Metal Apocalypse) May 19th and 20th, and at Frost & Fire in Ventura coming up October 7th-9th.

We have a split with Skelator due to come out this spring through Swords & Chains/Unholy Anarchy Records on 10” vinyl, and you can expect another three-song demo cassette sometimes this spring/summer, preceding the second album which we’ll be hoping to release before the end of the year, probably September/October. Aside from the previously mentioned festival appearances we have no major tour plans at this time, mostly due to our lives outside of Substratum. Expect us to hit the road in 2018. 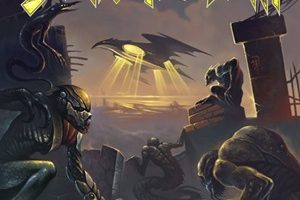